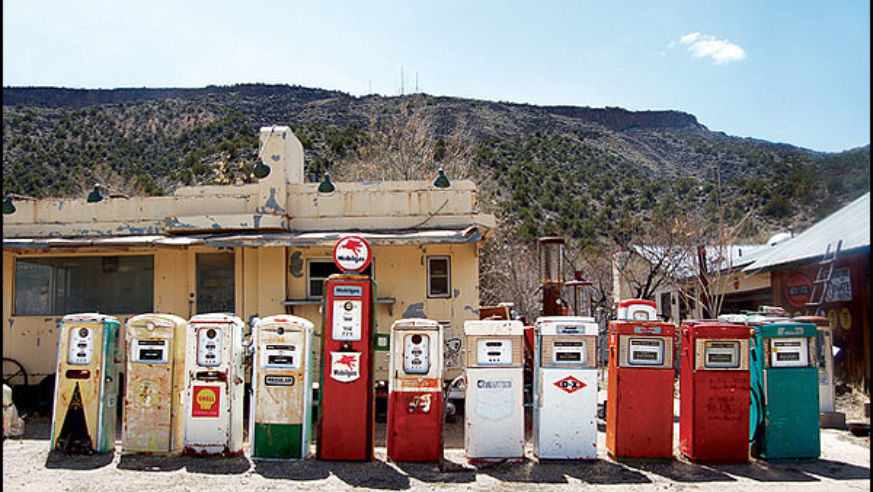 Retro gas tanks on display north of Española on N.M. 68

Between Santa Fe and Taos, a rush of expats is changing the face of the high desert—in all the right ways.

Ask locals how they wound up in northern New Mexico, and sooner or later, you'll hear some variation on the same story: They were just passing through when they decided on a lark to stay. For good. Maybe it's the earthy adobes or the sprawling desert around Taos, but few places inspire such spontaneous, accidental affection.

Missionaries, artists, and hippies have all fallen hard for the state's charms over the years, but lately a new breed has been settling in. Big-city chefs, fashion designers, hoteliers, and Hollywood types (Julia Roberts, Gene Hackman, and Val Kilmer, among others) are adding a subtle sophistication to New Mexico's scrappy sensibility.

Julia Roberts and I have a little something in common. I showed up in Santa Fe for a three-month job, and 15 years later, I'm still here. Clearly this town has a hold on me, but for all its appeal, I keep hearing more and more about a new energy in Taos, some 75 miles northeast. So I clear two days, load up the car, and head north.

After a short drive out of Santa Fe, U.S. 84/285 drops 1,000 feet into the Pojoaque Valley, a narrow corridor of Native American pueblo lands with a lively local art scene. My first stop is Studio E, the workroom of Sherry Stein, a former accessories director at the Gap who now makes her own line of custom canvas-and-suede handbags in an old gas station in the town of Cuyamungue (ssteindesign.com, by appointment). Over tea, Sherry lets me sort through her inventory of turquoise-suede key chains ($22) and travel totes ($385), all stitched on-site.

Continuing on, the country opens into irrigated pastures with sweeping views east to the Sangre de Cristo Mountains, stretching all the way to the Colorado border. In Española, U.S. 285 crosses the Rio Grande, and 20 miles later, I roll into Ojo Caliente Mineral Springs Resort & Spa(50 Los Baños Dr., Ojo Caliente, ojocalientesprings.com, rooms from $119). As one of the oldest hot springs hotels in the country (circa 1870), Ojo Caliente helped jump-start New Mexico's now ubiquitous spa culture. Last year's multimillion-dollar overhaul turned the once kitschy spread into an affordable full-service resort, tricked out with 10 different mineral pools, an expanded spa, a new wine bar, 12 miles of hiking and biking trails, and twice-daily yoga classes in a yurt. I splurge on a room with its own outdoor tub on a private terrace and follow up a 50-minute facial with a plate of piñon-glazed trout at the on-site Artesian Restaurant.

From Ojo, a newly paved stretch of Route 567 winds across a sagebrush mesa to theRio Grande Gorge Bridge. Eight hundred feet below, the Rio Grande wiggles between crumbly basalt cliffs, its riffling water glinting in the sun. I want a closer look, so I follow washboardy Tune Drive five miles to the lip of the gorge and scramble down the half-mile trail toStagecoach Hot Springs, two natural pools right at the river's edge. I have the place to myself, and as I soak in the warm water, ravens wheel overhead.

At first sight, the slightly ramshackle town of Taos would not strike you as a cultural hotbed. Yet that's exactly what it has been since the early 1900s, when it emerged as a haven for now-famous artists and writers. Their clubhouse was the Mabel Dodge Luhan House, a rambling adobe named for its New York socialite owner who, for more than four decades, hosted an avant-garde salon that drew luminaries like Ansel Adams, Georgia O'Keeffe, Willa Cather, and D.H. Lawrence. These days, Mabel's is a simple but cheery B&B that's remained remarkably unchanged since its heyday, right down to the creaky wood floors and the pigeon roosts (240 Morada Ln., mabeldodgeluhan.com, from $98). I'd reserved the Solarium, Mabel's private writing room on the third floor. Enclosed entirely by glass, with unobstructed views of the mountains, the perch feels like it's floating in air.

After checking in, I wander over to the Plaza, a reminder of Taos's heritage as a Spanish mission town. I bypass the old-timey storefronts selling saddle blankets and scented candles for hipper spots like Substance, a pocket-size boutique specializing in women's clothing and apothecary—think designer T-shirts and smartly packaged bath potions (102 Dona Luz, 575/751-0992). Then I head over to The Harwood Museum of Art, where the collection ranges from abstract paintings by mid-century "Taos Moderns" to sleek wood stools designed by the king of desert artists, Donald Judd (238 Ledoux St., harwoodmuseum.org, admission $8).

For a town of about 6,000 people, Taos has a expansive restaurant scene. Locals rave about the organic chicken tacos served by candlelight at the Love Apple, and the Sumatran red curry at Hiro Hobo, a tiny Japanese café and sake bar in the nearby village of Arroyo Seco. But I want to walk to dinner from Mabel's, so I opt for Graham's Grille(106 Paseo del Pueblo Norte, grahamstaos.com, entrées from $13). A bistro just off the Plaza, it's owned by Peter and Lesley Fay, restaurateurs from Sonoma, Calif., who downshifted to Taos a decade ago. Graham's is both urbane and neighborly: While Peter waits to greet you by name at the door, Lesley is whipping up a mean Chimayo-chile-and-blue-corn-calamari appetizer in the kitchen. In a sense, it's the perfect expression of everything this place has become—intimate and impressive all at once.