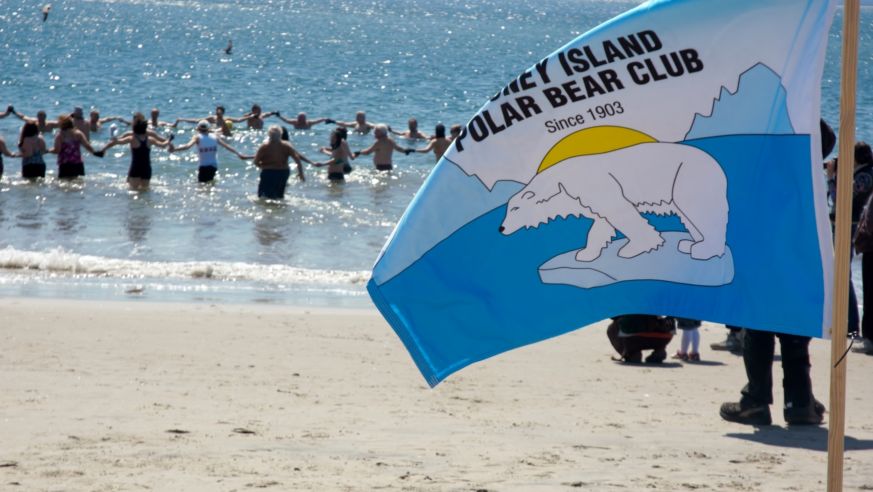 The Coney Island Polar Bear Plunge is an eye-opening way to enter the New Year with a splash.

It started, as most unlikely things do, with a great deal of hesitation. But it was the gut-instinct strain of hesitation, the kind that morphs into gusto, not the kind of reluctance that’s grounded in reason, which could make you think instead of act. It was four years ago at a New Year’s Eve party in Brooklyn at my friend’s house, we’ll call her Celeste. Her friend, we’ll call her Gretta, went home early because she was meeting her Cross Fit group in the morning to go to Coney Island for the annual Polar Bear Plunge. She wasn’t going to jump. She was going to join the thousands of onlookers whose respect—or schadenfreude, depending on their sensibility—was enough to draw them out of bed and to the chilly shore of the Atlantic on the one day it’s acceptable, if not endorsed, to sleep until noon.

The Coney Island Polar Bear Club meets once a week to go swimming in the ocean when the weather gets cold. It was founded in 1903, but their big day is January 1. I wanted in. Was it too late to join Gretta's Cross Fit team? Absolutely not, she said. She’d meet me there at noon. Immediately after midnight, I said my farewells, and headed home to excavate my bathing suit from one box or another. I bought fleece-lined leggings at the 24-hour CVS on the way.

I have never skydived, run a marathon, or been within spitting distance of a wild animal on a safari. I have never ridden on a motorcycle, set off a firework, or attended a Black Friday sale. I eat kale, workout a great deal, and I cross to the other side of the street when I see a discarded mattress on the sidewalk. I don’t jaywalk. I make it a priority to keep my body out of harm’s way. But despite Celeste’s objections, throwing myself in 33-degree ocean water on a 24-degree day did not seem like a peril, it seemed like an inevitability.

Any of my friends will tell you that I hate summer. No, really. Getting overheated just by walking two blocks or roasting in the sun while lying in sand as a sport is simply not my thing. Sand is just a classy version of dirt, the way I see it. If I must go to the beach, I’ve always enjoyed the chilly waters along Maine’s rocky coast to tepid, mellow Caribbean waves. I was born in November and I have a theory that people who take their first breath when it’s cold outside have a natural proclivity for winter. Vice versa for summer babies.

Not sure if my theory is right across populations, but it’s true for me. At the launch of 2018, I’ll head to the beach at the southernmost point of Brooklyn and throw myself into the frigid Atlantic. For the fifth time. Please don’t tell my mother.

A WINTER TRIP TO THE BEACH, VIA SUBWAY

There are 45 stops on the F train, which runs from the center of Queens through the island of Manhattan and then on to the southern tip of Brooklyn, culminating at the Coney Island station. Each January 1, as the train rolls through Manhattan and its eastern borough, people with varying combinations of layers (ski parkas and shorts, wetsuits and sweaters, lycra pants and knitted sweaters) trickle onto each car. Most carry oversized bags filled with blankets and towels. Some tinker with their Go-Pro. People appear one of the following ways: eyes-down with controlled anxiety; visibly panicked; wide-eyed and grinning; blissed out and at one. Sometimes strangers talk to each other. (“How many is this for you?” a first-timer asked me last year. “My fourth.” “Does it hurt?”)

Coney Island is everything you imagine it looks like in vintage imagery. The Cyclone roller coaster, the Wonder Wheel, the spires of the old Luna Park are all visible as you approach. They are thrills on pause, as they’re all shuttered for the winter, reminders that Coney Island would be deserted any other winter day. The original Nathan’s Famous hot dog stand is one of the first things you see when you hit the boardwalk. Rather, the line is the first thing you’ll see, as people wait on a final jolt of fortification.

Several ambulances are positioned in the parking lot, which took me by surprise my first time. I choose to ignore them. And, for whatever it’s worth, I’ve never seen them in action during or after the plunge. Each year, as I make my way through the crowd to register, it’s a dependable mix of hipsters, jocks (typically in sports team garb), burly men speaking Slavic languages or Russian, septuagenarians and even a few octogenarians, petite Asian women, women in mermaid regalia or Playboy bunny costumes posing with the aforementioned jocks and burly dudes, and the leather-jacket-clad Staten Island chapter of Hell’s Angels. Stern cops stand on, looking jaded.

The Polar Bear Plunge is a fundraiser, but the first time you do it, it will likely be a bit of a revelation to learn the extent to which it is a thoroughly organized event. In the past the fundraising has been for Camp Sunshine, a facility in Maine for sick children and their families, but the cause changes occasionally. You wait in line to give your money (at least $25 is suggested), sign a waiver just in case, get a colored bracelet, then move along to the T-shirt station where you shout out your shirt size. I’ve learned that you need to be slightly aggressive. And hope I’m there in time to get one of the mediums. While on line everyone chats with one another, largely to psych each other up.

A large banner indicates the jump time of each of the five colored wristbands. They’re spaced in 15-minute blocks. As the beach fills up, groups stake out their turf, spread blankets, and cluster together. Flasks are passed around. People strip down to bathing suits and take a deep breath, feeling the frigid air inside and out. Jubilant announcements come over a loudspeaker. A bona fide club member welcomes us invited interlopers, rattles off safety measures, and calls the green bracelets, the first group. They line up a few hundred feet from the water, surrounded by onlookers on both sides, cameras ready. A horn sounds and everyone runs down the beach, stampede-style. Some dally and wade to their ankles, their knees, their thighs, some charge in. I am not one to understand thermodynamics, but the reason I tell people this isn’t as drastic as a cold shower is because your skin is already cold. The temperature differential is not as dramatic.

There is truly nothing like the sensation of lining up with fellow revelers and waiting for the horn. Having done it several times, I know exactly what to expect: the initial clash of giddiness and wariness, a flash of will-I-or-won’t-I. Reason tries to intrude, but it’s hushed by the buzz of the crowd. Cue: the adreneline-fueled fight-or-flight sensation, it’s do-or-die. The horn blows. Showtime. I go in slowly: ankles, knees, hips, deep breath, dunk. My group is nearby but I don’t hear them. The cracking shock that takes hold of my body is like a glacier’s icy embrace. Everything is scrambled, until it isn’t. Survival mode kicks in, reality returns, every cell in my body is working overtime, and a feeling of invincibility washes over me. This is what it is to be alive.

People rush out of the water faster than they ran in. Strangers high-five one another. It’s a team victory. It’s a personal triumph.

And as I dry off, all of a sudden, every one of my better-living resolutions for the New Year seems like a cakewalk. If nothing else, the plunge makes you understand that perspective matters.