New York: A cool hotel for under $100 a night is adding rooms 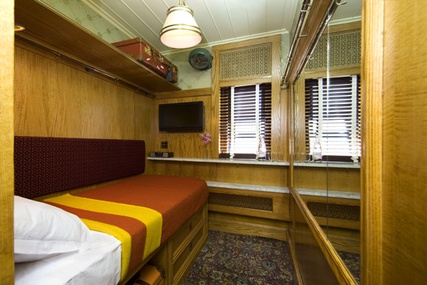 A visit to New York—one of the most expensive cities in the country—might not seem wise in the current economic climate, but maybe this will help: We know of a hotel where you can pay less than $100 per night. Are the rooms big and plush? Well, no. They're tiny, and most guests share a communal bathroom. But they're stylish, clean, and have more high-tech amenities than some hotels that cost three times as much.

The Jane Hotel
The West Village location is a whole lot cooler than midtown, where most of the city's hotels are, and the newly restored 1907 building has a heck of a lot more character. The $99 rooms each have a single bed with built-in drawers, a luggage rack, free Wi-Fi, a phone with voicemail, an LCD television, a DVD player, and an iPod docking station. Sixty rooms are currently open, and the remaining 140 will open in the New Year. If you're feeling flush, you can go for one of the 30 queen rooms, most of which will have their own bathrooms (rates haven't been set yet, but will probably be in the mid-$200s).

In February, a ballroom bar and breakfast venue will open (breakfast will be included in the $99), and in the summer, look for a rooftop bar and basement pool. 113 Jane Street, 212/924-6700, thejanenyc.com.

We found eight affordable hotels, including The Pod Hotel in Midtown East where a room with bunk beds starts at $89 per night. Rooms have iPod docking stations, LCD televisions, free Wi-Fi, telephone with voicemail, in-room safes, closets, and a table and chair. Larger rooms, some with private bathrooms, start at $109. Check out the full list of hotels… 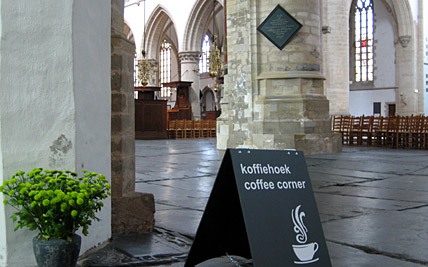 Should churches have gift shops and coffee shops?

Some of Europe's greatest contributions to art and architecture have been in its churches. But Europeans are donating less and less money to churches. So there's less money on hand to maintain these gorgeous buildings. This trend really hit home for me during a summer visit to Haarlem, a town in the Netherlands. I dropped by the Grote Kerk (or Sint Bavokerk), a Protestant church. Its Gothic buttresses inspire passersby to look upward. Its organ (shown here) has an astonishingly rich sound despite being more than three centuries old. Handel and Mozart are said to have played on it. I was surprised to see a coffee shop in one part of the church. Some pews had been cleared away, and an espresso machine with some tables had been filled in. The goal was not to offer treats after a service to encourage parishioners to mingle. Instead it was to earn some extra cash. I had never seen a caf&eacute; in a church before, but I've often seen churches try to earn money on tourists. Elsewhere in Europe, the line between where a church ends and a gift shop begins is often blurred. Have you ever witnessed this? If so, feel free to share any thoughts or stories. 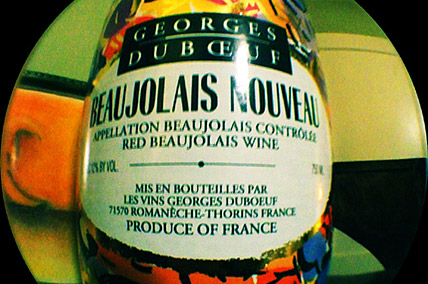 My introduction to Beaujolais wine came, oddly enough, from an Urge Overkill song. The Chicago band sings, in "Ticket to LA," about sucking on a bottle of "boojalaaaay" while riding a westbound Greyhound bus. That certainly sounded exotic to a 16-year-old in Kansas. Having no other frame of reference, I imagined this Beaujolais tasting something like the wine coolers we drank in the Taco Bell parking lot. I wasn't wrong. Years of Paris-based wine "study" have led me to conclude that Beaujolais&mdash;at least the Nouveau variety&mdash;does indeed taste like Bartles &amp; Jaymes. The wine is light, sweet, purple, and meant to be served cold. Thanks to the process of carbonic maceration (to accelerate the wine's aging process), it also produces famously punishing hangovers. If that stimulates your adolescent cravings, you'll be happy to know that a ros&eacute; variety (strawberry cooler, anyone?) has been recently introduced in France and Japan. I'm crossing my fingers for "orchard peach" by 2010. Nearly 50 million bottles of this sweet stuff are now sold every year. The season begins with an official kickoff on the third Thursday of November (that's tomorrow). In the Beaujolais region of France (which also produces many fine cru like Morgon and Brouilly), there are more than 120 celebrations to mark the occasion. Global marketing maneuvers aside, this is a local harvest tradition that stems from vin de l'ann&eacute;e&mdash;a wine created to drink almost immediately in celebration of the crop. In Lyon and smaller towns of the region, the release date will be marked by fireworks, feasts, and, of course, lots of tastings. Bars and bistrots across Paris will also be celebrating on November 20. Walk down any street and you're likely to spot a sign proclaiming that "le Beaujolais Nouveau est arriv&eacute;!" Resistance is futile, so you may as well join in the youthful spirit and have some fun. Here are a few addresses to guide your regression: L'Estaminet, an adorable wine bar inside the March&eacute; Enfants Rouge, will put out a spread of cheese and charcuterie to accompany all-you-can drink vins primeurs (young wines) from Beaujolais and other regions. From 6-11 p.m. for &euro;20 ($25) per person. 39 rue de Bretagne, 3rd arrondissement, 011-33/1-42-72-28-12. There's a similar happening on the P&eacute;niche la Baleine Blanche&mdash;a white whale of a boat floating in the Seine. A buffet campagnard (country cookin') will be served from 8 to 10:30 p.m., and Beaujolais and beer will flow freely from an open bar all night. DJ Robi will spin with dancing until the wee hours. Entry is &euro;20 after 10:30pm, and &euro;30 ($38) if you arrive early for dinner. Docked at Port de la Gare, near the Simone de Beauvoir footbridge, 13th arrondissement, 011-33/1-42-52-64-31. For a more gastronomic evening, the excellent L'Opportun, a bouchon (Lyonnais-style bistrot), will serve classic food from the region and carefully selected cuv&eacute;es&mdash;the best of Beaujolais Nouveau. Menus start at &euro;19 ($24). 62-64 boulevard Edgar Quinet, 14th arrondissement, 011-33/1-43-20-26-89. MORE FROM BUDGET TRAVEL'S BLOG Our Affordable Paris series.

Actress and dancer Leslie Caron made her big-screen debut alongside Gene Kelly in the travel-inspiring musical, An American in Paris. In her more recent role of innkeeper, Caron is again doing her part to encourage Americans to visit France, despite the tough economic times. All rooms at Caron's Auberge La Lucarne aux Chouettes&mdash;a few restored 17th-century farmhouse buildings in Burgundy&mdash;are now &euro;99 ($125) on an ongoing basis. That's a discount of up to 42 percent as the most expensive rooms were previously &euro;170 ($215). Caron handpicked the antique armoires, sleigh beds, and painted tiles that outfit the rooms. The walls showcase photos and posters from her decades-long film career, which has included Gigi, The L-Shaped Room, and Chocolat. Her own paintings are on display, too. Michelin-award-winning chef Da&iuml;suke Inagaki oversees the atmospheric restaurant, which has exposed brick walls, raffia-covered chandeliers, and a crackling fireplace. Meals are at reduced prices: &euro;10 ($12.60) for breakfast, &euro;20 ($25) for lunch, and &euro;35 ($44) for dinner. With any luck, Caron will join you for coffee one afternoon. She frequently makes the 90-minute drive southeast from her Paris home to the auberge in the riverside town of Villeneuve-sur-Yonne. RELATED Movie Quest 2008 Real Deals: Biking in Burgundy, From $1,099 Our Affordable Paris series.