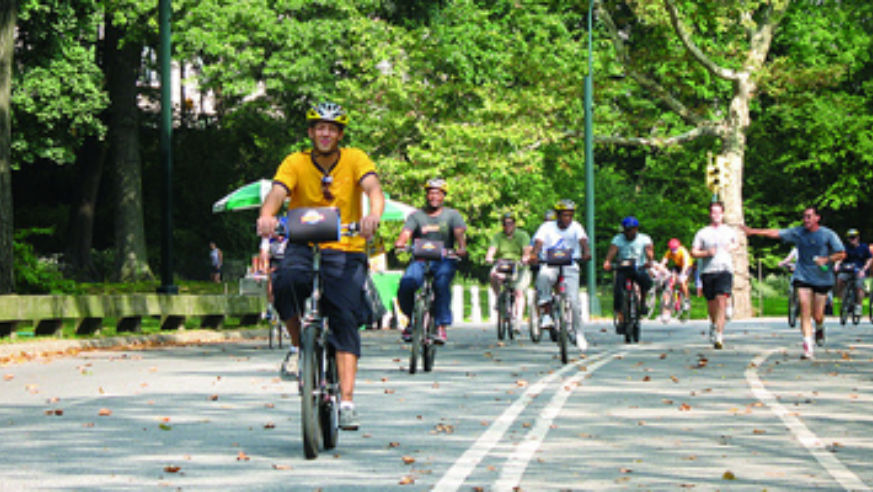 As New Yorkers, we like to think we set the trends. Yet there was one thing this city didn't have that most other major cities already feature: bike–sharing. But pack your helmets—starting this summer, locals and travelers alike will easily be able to take a two–wheeler for a spin.

The Citi Bike program will include 10,000 bikes in 600 locations around Manhattan and Brooklyn. The locations are still being worked out, but it looks like a good number of docking stations will be set up in high–traffic areas (like Columbus Circle at the southwest corner of Central Park) and transit hubs (outside Port Authority Bus Terminal). Of course, just like everything else in Manhattan, the rentals are not cheap, even with branded sponsorship by Citibank. A 24–hour membership is $9.95, with the first half hour of each ride free (pricing from there is $4 if you keep the bike for an hour, $13 for an hour and a half, and $25 for two hours).

Compare that toBoston, where a 24–hour membership is half the price of New York's system, with the first 30 minutes free. In Montreal, a 24–hour membership costs about $7 (the first half hour is also free). Chattanooga, Tennessee even beat NYC to the punch by launching their bike–sharing program last month, with a 24–hour membership costing $6—and the first full hour of your ride is included in the membership cost. I planned on wrapping up this list by making the point that the only place more expensive then New York, in terms of most things, is London. I was shocked to see that the cycle hire programthere is only 1 GBP (about $1.60) for a 24–hour membership! It can be inferred that heavy underwriting by sponsor Barclays keeps cost down.

I've lived in New York for a dozen years and have never biked, mostly because I am petrified of car doors being flung open and taxi drivers who take red lights as just a suggestion. But I'm tempted to take one of these for a spin (bring your own helmet).

What about you? Would you be intimidated by renting a bike in a strange city, or does that sound like a great way to see the sites?