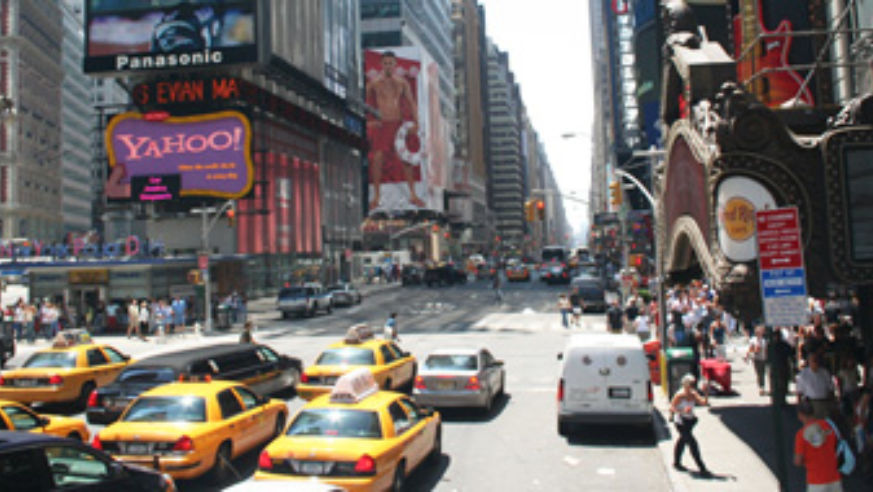 There are thousands of cabs on the streets of New York City, right? Hard to believe when you're stranded at Grand Central Terminal on a Saturday night, in the rain, with a big suitcase*.

But thanks to a recent study, there's now some scientific data—and a smartphone app—based on the day-to-day flow of taxi cabs in this vibrant city.

The NYC Taxi & Limousine Commission, the agency that regulates the city's yellow cabs, used GPS to track taxi pickup locations during a six-month period in 2009, resulting in data for 90 million real rides (who knows, maybe you were one of them?). Sense Networks, a software analyst company in the city, took the data and created a free app, CabSense, that was released earlier this month for iPhone and Android phones.

The app will come in handy if you're visiting the city and a bit marooned—CabSense will map your location and then show you the nearby corners where you are most likely to hail a cab. You can also use the "Time Slider" to plan trips ahead of time—ideal for that mad airport rush at 4 p.m.

The New York Times also took some of the data and created a cool interactive map that shows the taxi patterns across Manhattan during a typical week. Where do cabs pick up most? Penn Station, a major hub for New Jersey Transit, Amtrak, and many subway lines.

The city's taxi system is a hot-button topic right now: Back in March, the Taxi & Limousine Commission announced that about 3,000 cab drivers had routinely gouged passengers over two years, costing each one between $4 and $5 per trip. The TLC said drivers were flipping the wrong switch on their meters, kicking in higher out-of-town rates. But drivers hit back, arguing that the meters were often hard to read and that the accusation was unfair because the sample size in the report was too small. The argument is ongoing.

In other news, the commission also recently launched a taxi-sharing program.

For more on taxi cabs, including a nice list of FAQs and a Bill of Rights, see the TLC's website.

*Scenario based on actual, personal events. Oh, and it was cold.