Norwegian Cruise Line will introduce more of its popular Studios cabins for solo passengers when it launches its two newest ships in 2013 and 2014, Norwegian Breakaway and Norwegian Getaway, respectively.

That comes as good news for singles looking for affordable pricing.

Cruise line fares are typically based on two people in a cabin, with single travelers often getting stuck with a double tab. NCL sought to address the issue last year when it introduced The Studios, a highly innovative complex of inside cabins for solo travelers on its 4,100-passenger Norwegian Epic.

We're not talking rock bottom pricing — on Epic for a weeklong Eastern Caribbean cruise this winter you'll pay from $839 to stay in The Studios. But that's still better than doubling a $599 fare for a standard inside.

As on Epic, The Studios on the new 4,000-passenger ships will be located in their own private-entry complex, albeit smaller, with 59 cabins each on Breakaway and Getaway (compared to 128 on Epic).

The 100-square-foot cabins on all the ships share a hip design by London-based Priestmangoode that includes faux portholes in the door, which help to give the illusion of more space; full-size beds; deconstructed bathrooms (sink, shower and enclosed toilet are all separate); and colored, controllable LED lights that allow you to set the mood.

Most of the cabins connect, for singles traveling with friends.

Private keycard access also gets passengers staying in the complex into The Studio Lounge, a comfy, two-deck space with a bar where singles can mix and mingle.

Confessions of a Cruise Ship Magician 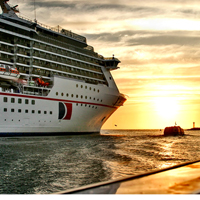 The number of places where it's OK to smoke on a cruise ship is shrinking: Increasingly, passengers aren't even allowed to smoke inside their cabins. This winter, smokers on cruise ships won't be able to light up in quite as many spots as they used to. At least four cruise lines have announced they are adjusting their smoking policies, and all of them designate cruise cabins as strictly non-smoking areas. The lines are: Carnival, which restricted smoking in certain public areas in June, and which is prohibiting smoking in staterooms as of December 1, 2011. Norwegian, which as of January 1, 2012, will ban smoking in all indoor spaces with the exception of the casino. Smoking is prohibited inside cabins, though smoking (of cigarettes only, not cigars or pipes) will be allowed on the outside balcony of balcony staterooms. Holland America, which is designating staterooms non-smoking areas starting on January 15, 2012. Smoking will be OK, however, outside on stateroom verandahs. Princess Cruises, which is prohibiting smoking in staterooms or balconies as of January 15, 2012. While all four of these cruise lines are making their smoking policies more restrictive, that's not to say that they are the most restrictive lines out there. A Cruise Critic post offering a comprehensive overview of cruise ship smoking policies reveals that many cruise lines already ban smoking in cabins. And the most restrictive cruise line of all? That award goes to Oceana Cruises, which allows smoking in just a handful of places on ships. Anyone busted smoking in a non-smoking area faces serious disciplinary action as well, including being forced to disembark at the next port of all, and possibly additional fees to cover damage or cleaning costs related to the offense. As for cruisers who'd like to smoke like chimneys, Cruise Critic recommends Pullmantur, a Spain-based cruise line with sailings in the Mediterranean that allows smoking nearly anywhere and at any time -- even during massages or in between courses at ship restaurants. MORE FROM BUDGET TRAVEL: See who was voted World's Best Cruiser Confessions of...a Cruise Ship Musician Ask Trip Coach: Ocean Cruising 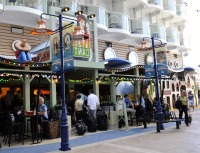 Some cruise lines take the "all" out of "all-inclusive"

The days of all-inclusive cruises including the cost of all of your meals seems to be vanishing. For a few years now, cruise ships have been offering "premium" dining at a higher price. ("Want a steak dinner? Splash out for a night at a higher price.") But in 2011, a mania for up-charging for meals may be kicking into gear. Case in point: Royal Caribbean International (RCI) has bumped up its fees for a couple of its so-called "premium" restaurants: Rita's Cantina and the Seafood Shack on Allure of the Seas and Oasis of the Seas. Passengers used to pay $8 for meals at Rita's Cantina, for instance. They'll now pay a fee of $3 to dine at the restaurant and then pay a price for each item ordered a la carte, too. The 15 percent gratuity isn't included either. (A tip of the hat to Cruise Critic for breaking this story.) The first absurdity here, I think, is that cruise company RCI considers Rita's Cantina and Seafood Shack to be "premium restaurants." Rita's Cantina and Seafood Shack serve the type of food that ought to be included in the "all-inclusive" price in the first place. The menu at Rita's Cantina includes such glamorous items as chicken tacos ($2) and taco salad ($3), while Seafood Shack goes all fancy with a basket of grilled jumbo shrimp ($7). Cruise Critic says that these changes amount to a price hike, noting that a meal with guacamole, a quesadilla and grilled chicken that cost $8 in the winter now costs $11.25. But, of course, that's because there's now ultra-premium restaurants, like Chops Grille. I'll agree that Chops Grille, with its selection of prime rib and lobster dishes, counts as a premium restaurant. I also agree that it's nice to have the option of splashing out on a fancy meal during a cruise. I'm willing to pay an extra cost for the meal, which is now $30 per person (a fee hiked by $5 this year). Yet the danger here is that all cruise lines will begin to serve sub-standard food in their main dining rooms. After all, by making the dining hall experience less attractive, a company can make more money by upselling customers on fee-based meals elsewhere on-board. I don't mean to pick on RCL, which offers an outstanding cruise experience overall. That corporation just happens to have been the latest one to do this. Another example from this summer: Norwegian Cruise Lines has put into place a $4 fee for late night room service. Room service used to be free. Royal Caribbean instituted this fee about two years ago. In another twist, if you order a pizza to your room on Norwegian, you'll pay $5 at any time of day. Is it just me? Or do you, as a traveler, mind these meal-related charges, too? Do premium restaurants and per-person charges allow cruise lines to broaden the range of food experiences on their ships? Or are they nickel-and-diming passengers? Let us know by posting a comment. Thanks! MORE FROM BUDGET TRAVEL Why Cruise Ships Almost Never Stay in Port Overnight (20+ comments) Mega-Cruise Smackdown (We pit Royal Caribbean's Oasis of the Seas against Norwegian's Epic) Confessions of a... Cruise Ship Musician Want that Towel? You Have to Pay $2.40

When cruise ships change locations, like many will in the coming months, passengers going along for the ride often score remarkable deals. Many cruise ships are like snowbirds, heading to warmer climates when the weather begins to get chilly. The annual migration is an opportunity for travelers seeking affordable cruises, often on itineraries that cross entire oceans, with plenty of relaxing days at sea en route. Right about now, when the departure dates for these cruises are in the near future, and when many ships poised to change locations still have abundant availability, is an ideal time to search for deals. Prices may dip even further at the very last minute, but by then it's likely to be more difficult to book inexpensive airfare to and from the beginning and end ports. So in terms of getting decent deals on autumn repositioning cruises and flights alike, now's as good a time as any. CruiseCompete makes it easy to browse all sorts of repositioning cruise specials in one spot, including 14 special one-way sailings between September and the end of the year. A 20-night cruise on the MSC Opera, for instance, sails on November 10 from Venice bound for Buenos Aires, with stops in A-list destinations Barcelona, Casablanca, and Rio along the way, and prices starting at $1,299 per person. The Carnival Magic, meanwhile, departs Barcelona on October 28 and hits Palma de Mallorca, Malaga, and Grand Turk before ending up in Galveston, Texas, 16 nights later. Rates for that itinerary start at just $861. A helpful CruiseCritic post also gives a primer on repositioning cruises for the fall of 2011, including a list of a half-dozen sailings. While the price is often right with such cruises, the itineraries aren't for everybody, as CruiseCritic notes: For some passengers, spending days on end in the middle of nowhere -- particularly on ocean crossings -- is more maddening than it is relaxing. Plus, repositioning voyages tend to be long (some nearly a month!), which limits them to retired seafarers and the lucky few with a decent amount of vacation time. MORE FROM BUDGET TRAVEL: Your Top 5 Money-Saving Cruise Questions, Answered! Confessions of a Cruise Ship Musician Trip Coach: Ocean Cruising

The tragic sinking of a Russian riverboat on Sunday that killed at least 113 people, many of them children, brings to question the safety standards of river cruise ships, especially those operating on Russia's Volga River. But the ships that U.S. river cruise operators deploy between St. Petersburg and Moscow are much larger and safer than the ship that sank much further east on the Volga, those operators say. The twin-deck Bulgaria sank at 1:58 p.m. local time on Sunday in the Tatarstan region of Russia en route from Bolgar to the port city of Kazan, which is 450 miles east of Moscow. The 56-year old riverboat had a maximum capacity of 120 passengers, but was carrying 207 people aboard, Russian news agency Ria Novosti reported. "Ours are much larger ships" than the Bulgaria, noted Richard Marnell, SVP of marketing in North America for Viking River Cruises, which owns and operates four river cruise ships in Russia. Ria Novosti reported that the ship had passed a regular technical inspection on June 15 this year, bringing into question oversight of Russia's river cruise industry. In response, Viking's Marnell assured that Viking's ships are "operating at the highest standard." In Russia, the 210-passenger Viking Pakhomov was just relaunched this year after undergoing a bow-to-stern renovation like those of its sister ships, the Viking Surkov and Viking Kirov, which relaunched in 2008 and 2009, respectively. Next year, the Viking Peterfof will be relaunched after being renovated. "Our partner in Russia is a large, established shipping company," noted Guy Young, president of Uniworld River Cruises, which this year launched a newly renovated ship on the Volga, the 206-passenger River Victoria. "They have over 150 years of experience in navigation, employ thousands of people and have their own ship yards. The ships are extremely well maintained and they comply with all safety regulations. This is a very different company than the small operator that was sailing the Bulgaria." Ama Waterways also this year started sailing the revamped 212-passenger Amakatarina. More from Budget Travel: Just Back From... a Russian River Cruise River cruise growth outpacing ocean cruises Rivers wreaking havoc: Mississippi too high, Rhine too low