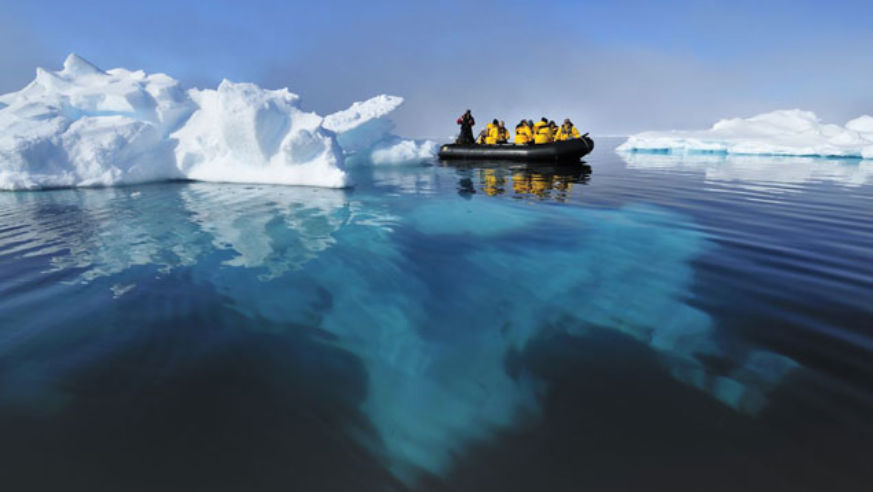 Companies like Quark Expeditions can take you on Arctic adventures.

Say "North Pole" and most people think of Santa, but did you know that the region is a hotbed for international intrigue? Or that it has a special connection to the unicorn? Just in time for Christmas, here are 10 fun facts about the most mythical place on earth.

There's more to the North Pole than just snow and Santa. Ever since it was discovered by Robert E. Peary, Matthew Henson, and four Eskimo companions back in 1909, the North Pole has been a place of international intrigue—did you know several countries are now fighting over vast underground oil reserves in the Arctic Circle? You can go see for yourself with expedition voyages or even spend the night in a hotel made entirely of ice—try the IceHotel in Jukkasjärvi, Sweden, or stay overnight at the Aurora Ice Museum in Fairbanks, AK, for a unique twist on the average igloo. Here, 10 more facts about the North Pole that may surprise you.

There are two North Poles

Unlike the South Pole, which lies over the continent of Antarctica, there is no land beneath the North Pole but more of a floating Arctic ice sheet that expands during colder months and shrinks to half its size in the summer. To complicate things even more, there are two different definitions of the North Pole. The first is the north magnetic pole, which is, quite literally, a magnetic phenomenon which changes daily depending on changes under the Earth's crust. Additionally, there is a north terrestrial pole, which is the fixed point that references the top of the Earth. Regardless of how you define the North Pole, global warming continues to be a problem here—as the polar ice caps melt, the sea levels rise, eliminating the land that polar bears and other wildlife depend on for survival.

It's at the center of an international controversy right now

Did you know 30 percent of the world's untapped oil reserves are located in the Arctic Circle? The U.S. Geological Survey says that amount could actually be higher, since so much of the region has yet to be explored. Complicating matters is the fact that multiple countries lay claim to the Arctic Circle—Russia, Canada, Norway, Denmark (via Greenland), and the United States (via Alaska). Each country is allowed to explore potential oil reserves within 200 miles of their coastlines, but in 2007, Russia used a mini-submarine to plant the country's flag on the floor of the Arctic Ocean in an attempt to claim the region and its natural resources, a move that was rejected by the U.N. as the countries continue to work toward a solution.

The North Pole has seasons

Just like everywhere else on Earth, the temperature varies here depending on the time of year. The North Pole is warmest in July, if by warm you mean it's actually freezing—32 degrees. If that gives you the shivers, brace yourself. Temperatures in February drop to a bone-chilling 31 degrees below zero. The amount of light each day depends on the time of year, too. Alaska as well as Norway and the other Arctic Circle countries each face six months of broad daylight and six months of almost total darkness because of the angle at which this top portion of the Earth receives sunlight.

Yet, it is not the coldest place in the world

It might come as a shock, but even with temperatures with a high of just 32 degrees, the North Pole is not the coldest place on Earth. The South Pole is (in winter temperatures average -76 degrees F). Unlike the North Pole, the South Pole sits on top of a thick sheet of ice, which in turn sits on top of a piece of land—Antarctica. At more than 9,000 feet above sea level, Antarctica is also the world's tallest continent. The North Pole, on the other hand, is made up of a thin Arctic ice sheet that sits barely a foot above sea level—a fact that allows the landscape to absorb heat from the surrounding Arctic Ocean.

There is life up there

While the conditions may be considered too tough for most humans, there are native Inuit tribes living in northern Canada and Alaska. The outer reaches of the Arctic Circle are a great place to see polar bears in the wild. Keep an eye out for other Arctic dwellers like Orca, Humpback, and Beluga whales, the arctic fox, and Svalbard reindeer. This isn't the only place to see reindeer in the world; a reindeer herd in the U.K. inhabits the Cairngorm Mountains of northern Scotland. One animal you won't see in the North Pole is the penguin. They live in the South Pole. Several species of flying penguin-like birds called auks, guillemots, and puffins can be seen in the Arctic Circle, though.

Did you know that the creature that inspired myths about unicorns comes from the North Pole? The narwhal, a small whale that lives in the chilly waters of the Arctic Circle, has a six-to-10-foot long tusk, a trait that earned it the nickname "unicorn of the sea." Back in the 16th century, they were often believed to possess magical powers that could be used to cure diseases. Demand was high, and legend has it that Queen Elizabeth I shelled out 10,000 pounds to get her hands on her very own narwhal tusk. Nowadays, narwhal populations are on the decline, due to hunting (Inuit peoples use the meat, tusks, and vitamin-C-rich skin in their everyday lives), climate change, and fishing for halibut, their main source of food.

Shh! Don't tell the kids, but Santa's Workshop isn't really in the North Pole—it's in Finnish Lapland. You can visit Santa Claus Village in the Finnish town of Rovaniemi year round, send letters to and from his post office (they'll bear the official postmark of the Arctic Circle), and spend time exploring Santa Park, a series of Christmas-themed caves where you can meet jolly old St. Nick and his elves. You can even visit Santa's reindeer at the onsite Sirmakko Reindeer Family Farm. If Finnish Lapland seems a little out of reach, Santa also has a satellite workshop in the holiday-themed town of North Pole, Alaska where the streets have names like Kris Kringle, Mistletoe, Donner, and Blitzen.

If you would rather write to Santa than visit his workshops, the U.S. Postal Service will postmark letters from Santa Claus as long as they are received by December 10th each year. Simply mail your letters to North Pole Postmark Postmaster, 41-41 Postmark Drive, Anchorage, Alaska 99530 with "Santa, North Pole" marked as the return address. If time is of the essence, you can always email Santa—he'll answer it right away. On Christmas Eve, use the Santa Tracker North Pole Command Center app ($1.99) to keep an eye on Santa's progress.

You can vacation there

While not exactly a budget destination, you can embark on your own Arctic adventure. Quark Expeditions offers a wide variety of cruising expeditions ranging from the Spitsbergen Explorer, an 11-day cruise around the Norwegian island (from $4,995 per person) to The Ultimate Arctic Adventure, which sails from Russia to the 90-degree north spot that represents the North Pole, visits Franz Josef Land, and tours the Arctic Ocean (from $23,995 per person). Go from June to mid-July to see the polar bears and walrus hunting in their own natural habitat, from mid-July to mid-August to see flowers and other arctic flora in bloom, or from mid-August to September as birds begin to migrate south.

There are hot springs up there

If you are in the frigid Arctic Circle, you'll need to find a way to warm up. Chena Hot Springs, located about an hour outside Fairbanks, AK, has a natural geothermal hot spring in a rock lake surrounded by nature. The hot springs are open from 7 a.m. to midnight, giving you plenty of time to soak and get a front row seat for the Aurora Borealis (best viewed between August and May). You can also stay at the Chena Hot Springs Resort ($65 a night to room in a Mongolia-style yurt, or stay in a room at the resort for from $189 a night). A number of hot springs can also be found in Norway's Svalbard Islands, in Iceland (the Landmannalaugar Hot Springs is well-known), and in Russia—Scientific American profiled the hot springs in Oymyakon, Siberia, the coldest town on Earth.

There is a North Pole marathon every year

The North Pole Marathon bills itself as the World's Coolest Marathon, and with an average wind chill temperature of 22 degrees below zero, they'd be right. It's happened every year since 2002—in 2011 255 people from 38 nations around the world braved the conditions to compete in the 26.2-mile marathon race on top of a floating Arctic ice shelf. Competitors are transported to an international North Pole Camp on the polar ice shelf to start the race. And they layer up-thermal layers, windproof pants, gloves, two pairs of socks, and even goggles are necessary. The next North Pole Marathon takes place on April 9, 2013, and costs a pretty penny—about $15,561 for the entry fee that includes accommodations in Spitsbergen, Greenland, before and after the race, flights to and from the North Pole Camp, helicopter flights within the polar region, medals, and a commemorative DVD of the race. But the bragging rights are priceless.