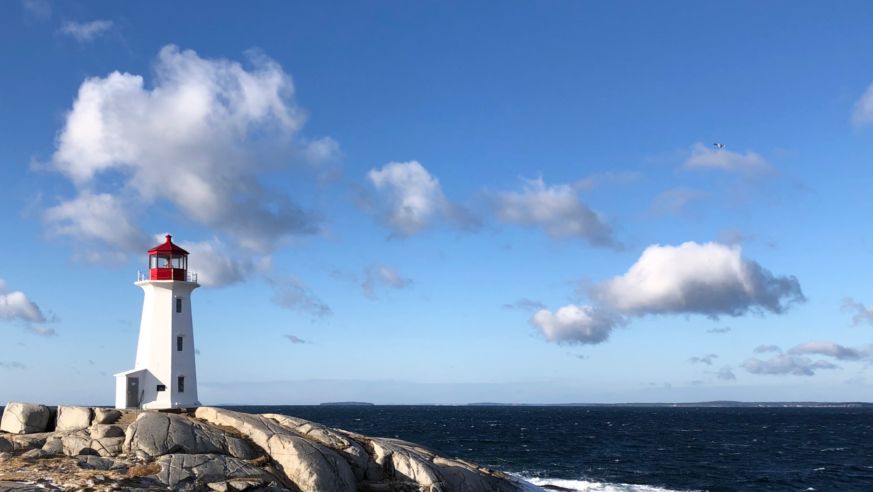 Nova Scotia? In winter?? You betcha! It may be cold, but the South Shore Lobster Crawl is not to be missed.

It’s barely 9:00 in the morning, and I’m already worried about losing a toe. Possibly three. I’m on a lobster boat off the coast of West Berlin, Nova Scotia, Canada, and my weather app says it’s in the low 20s—which doesn’t sound so bad, until you factor in the bone-chilling winds coming off the North Atlantic. Those gusts are no joke. 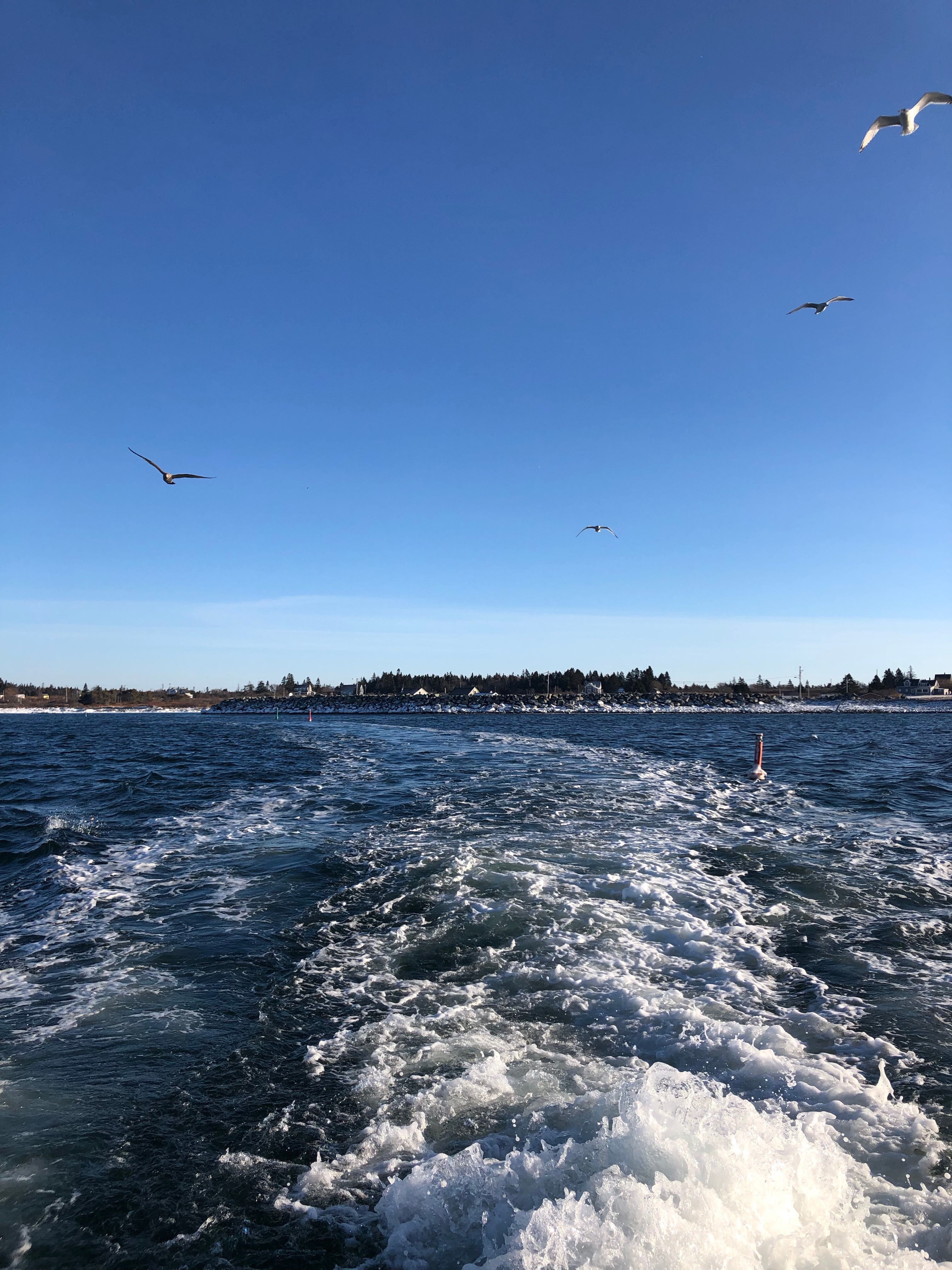 The view from the stern. (Maya Stanton)

If we'd started earlier, it would’ve been even colder, the locals nonchalantly told me. But even now, with the sun beaming down, the fishing crew is bundled from head to toe in heavy-duty gear: thick, waterproof coats and pants, substantial boots, insulated gloves, hats, hoods, and, on the men, full beards. I, on the other hand, thought my thickest pair of socks would make up for a decidedly non-winterized pair of boots. I was mistaken.

As it turns out, lobster is expensive for good reason. In this corner of southwestern Nova Scotia, the fishing season runs from the last Monday in November through the end of May, but it peaks in the winter months, the frigid Atlantic providing the ideal environment for North American lobsters. The boats don’t go out every day, especially in January and February—sometimes the winds are prohibitive, sometimes it’s just way too cold—but when they do, it’s tough work. The payoff is worth it, though: Catches in this fishing sector account for some 40 percent of Canada’s annual lobster haul.

And now travelers can be there to take it all in. Currently in its second year, Nova Scotia’s South Shore Lobster Crawl (lobstercrawl.ca) invites the hardy to brave the February elements for three weeks of activities, events, and, of course, good eating up and down the coast—everything from concerts and crafts to art and sculpture shows to a beer festival and a lobster-roll contest—all in the name of that sweet, sweet lobster meat.

My journey started in Halifax, the province’s capital. I had come to join the crawl—to lean into winter, if you will. We set off on Route 3, aka the Lighthouse Route, a winding, seaside drive that took us first to Peggy’s Cove, a picturesque fishing hamlet on St. Margaret’s Bay, some 25 miles southwest of the city. It’s one of the country’s most photographed spots, thanks in no small part to its iconic lighthouse, built in 1914 and not showing its age in the slightest. 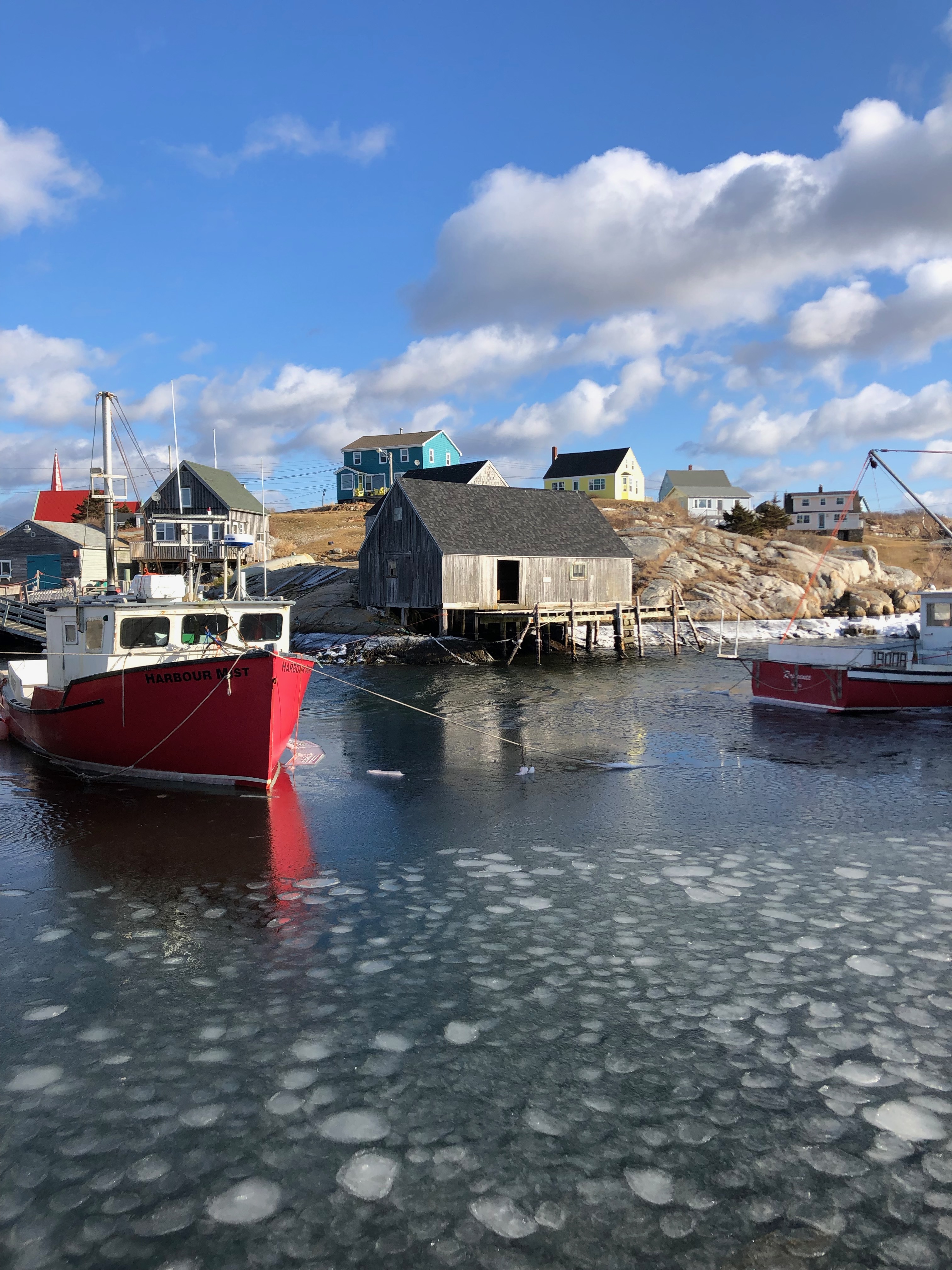 The winds were vicious out on the point, but the weathered wooden fishing shacks and vibrantly colored boats and hillside homes were none the worse for wear. Requisite photos acquired, we headed to Lunenburg: a colorful port town with a colorful history, some 60 miles further south on the Lighthouse Route. Established in 1753 and forged on the back of the Atlantic cod–fishing industry, not to mention ship-building and rum-running, Old Town Lunenburg was designated a UNESCO World Heritage Site in 1995, when the organization declared it “the best surviving example of a planned British colonial settlement in North America." And with its mix of stunning 18th-century Victorians, wooden churches, and Cape Cod-style homes, it’s clear that preservation takes priority here. 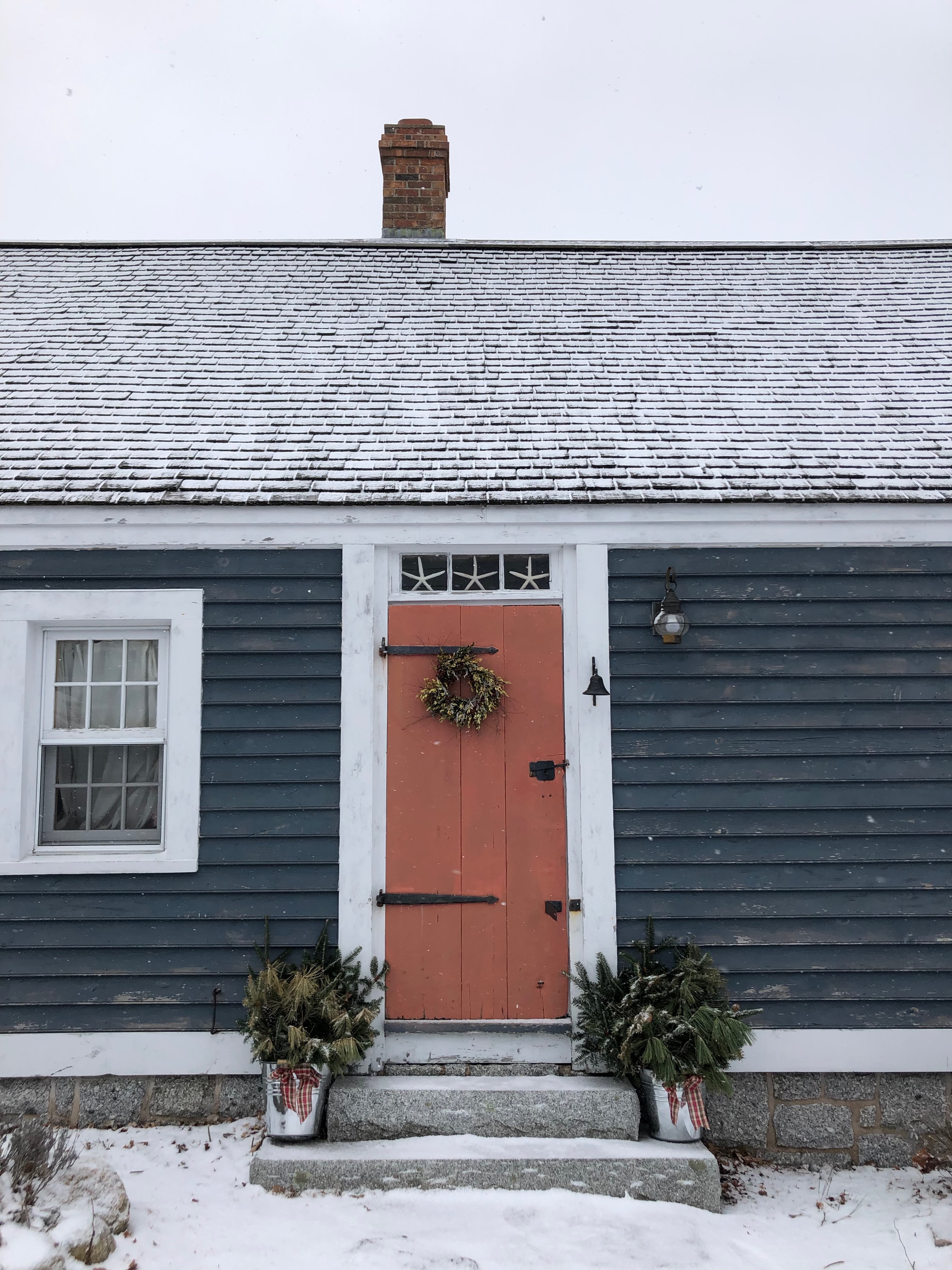 Snow was beginning to fall when we met our guide for a walking tour (lunenburgwalkingtours.com). We checked out the oldest house in Lunenburg, a navy Cape Cod dating to the town’s founding in 1753. It's such a living museum that there are plexiglass-covered cutouts in the walls to show off the building's rough-cut, hand-hewn timber construction. Also on the agenda: a pale pink Victorian that featured in a 1973 horror flick starring a young Ron Howard, and a circa-1753 Anglican church that was painstakingly reconstructed, beam by original beam, to the tune of $6.7 million after a gut-wrenching fire in 2001.

From there, it was a quick jaunt down to the working waterfront, where scallop draggers and deep-sea fishing boats ply their trade. As flurries continued to fall, we made our way to the Grand Banker Bar & Grill (grandbanker.com), a small dining room with a menu overflowing with local seafood and floor-to-ceiling windows overlooking the sparkling bay. 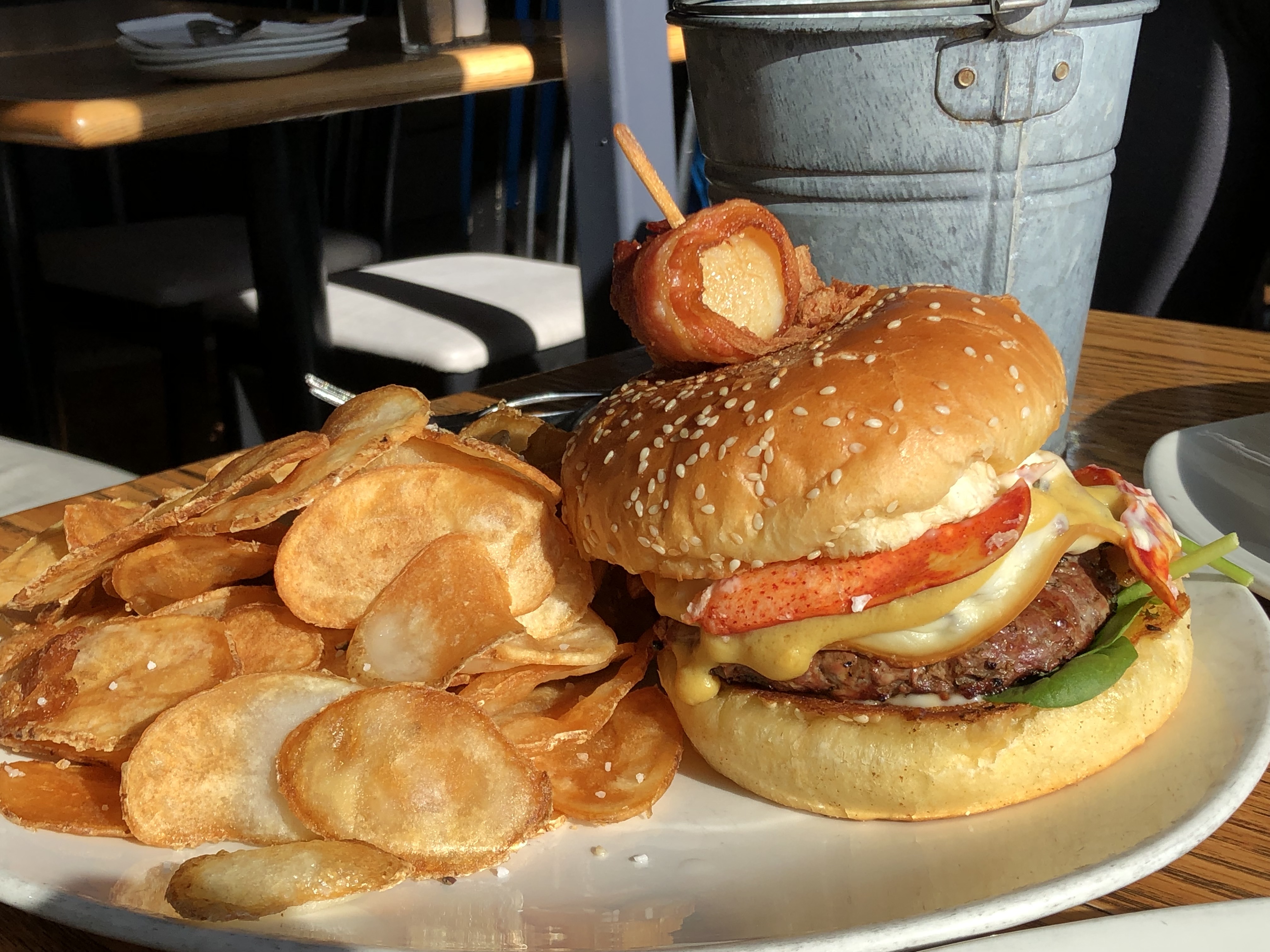 I tried a rich and tangy Acadian-style Cajun stew, a heaping pile of Nova Scotia mussels, and a handful of silver-dollar-sized scallops straight from the wharf, but the showstopper was the Lunenburger, a beef patty piled with smoked mozzarella, bacon, lobster knuckle and claw meat, plus garlic aioli and tarragon-butter sauce, set on a smattering of baby spinach and crowned with a bacon-wrapped scallop. A jaw-dropping creation.

After a feast like that, a nip of brandy was in order, so we popped over a few blocks to Ironworks Distillery (ironworksdistillery.com). A micro-distillery housed in an 1893 blacksmith’s shop, Ironworks leans on the Maritime Provinces’ rum-loving heritage (the Rum Boat Rum is a standout, aged in bourbon barrels on the property and on the floating barge anchored a stone’s throw from the shop’s side door), but the line also encompasses gin, vodka, and fruit-based brandies and liqueurs. The apple brandy hit the post-prandial spot, and the raspberry liqueur tasted like it got up and walked straight off the pages of Anne of Green Gables. (Remember when Anne and Diana nicked that bottle of raspberry cordial and got scandalously drunk?)

Next stop, the evening's accommodations: Quarterdeck Beachside Villas and Grill (quarterdeck.ca), a collection of condo-style rooms with contemporary beach decor (think: IKEA meets shabby chic) and, overlooking the ocean, private decks complete with Adirondack chairs, as well as a stand-alone restaurant cranking out great seafood. Before dinner, as a preview of a similar event slated for the Lobster Crawl’s closing weekend, we took a painting class led by celebrated local artist Andre Haines. Over glasses of sparkling Nova Scotian wine, the multi-talented theater alum introduced us to traditional provincial tunes and painterly techniques alike—a thoroughly enjoyable experience, though, suffice it to say, I will not be giving up my day job for an artist's studio anytime soon.

America has Punxsutawney Phil, Nova Scotia has Lucy the Lobster. We were up before dawn on Groundhog Day, bound for Barrington’s Cape Sable Island Causeway to see if the tough-shelled celebrity would amble out of her cage and see her shadow, or if spring was on its way. Lucy was feeling a bit drowsy, but her handlers gleefully pronounced that she’d caught a glimpse of her reflection, meaning six more weeks of lobster season was sure to follow.

We cruised by Clark’s Harbour, a working wharf, and Cape Sable, Atlantic Canada’s most southerly point of land, before our visit to Fisher Direct (fisherdirect.ca), a family-owned and operated facility that delivers live lobsters to vendors all over the world, particularly China. With tanks and spray systems that can hold upwards of 400,000 pounds of live lobster at a time, the plant processes 10 million pounds annually—a mind-boggling number, though owner Tyler Nickerson is quick to point out it isn’t really that much, especially compared to his big-box competitors. 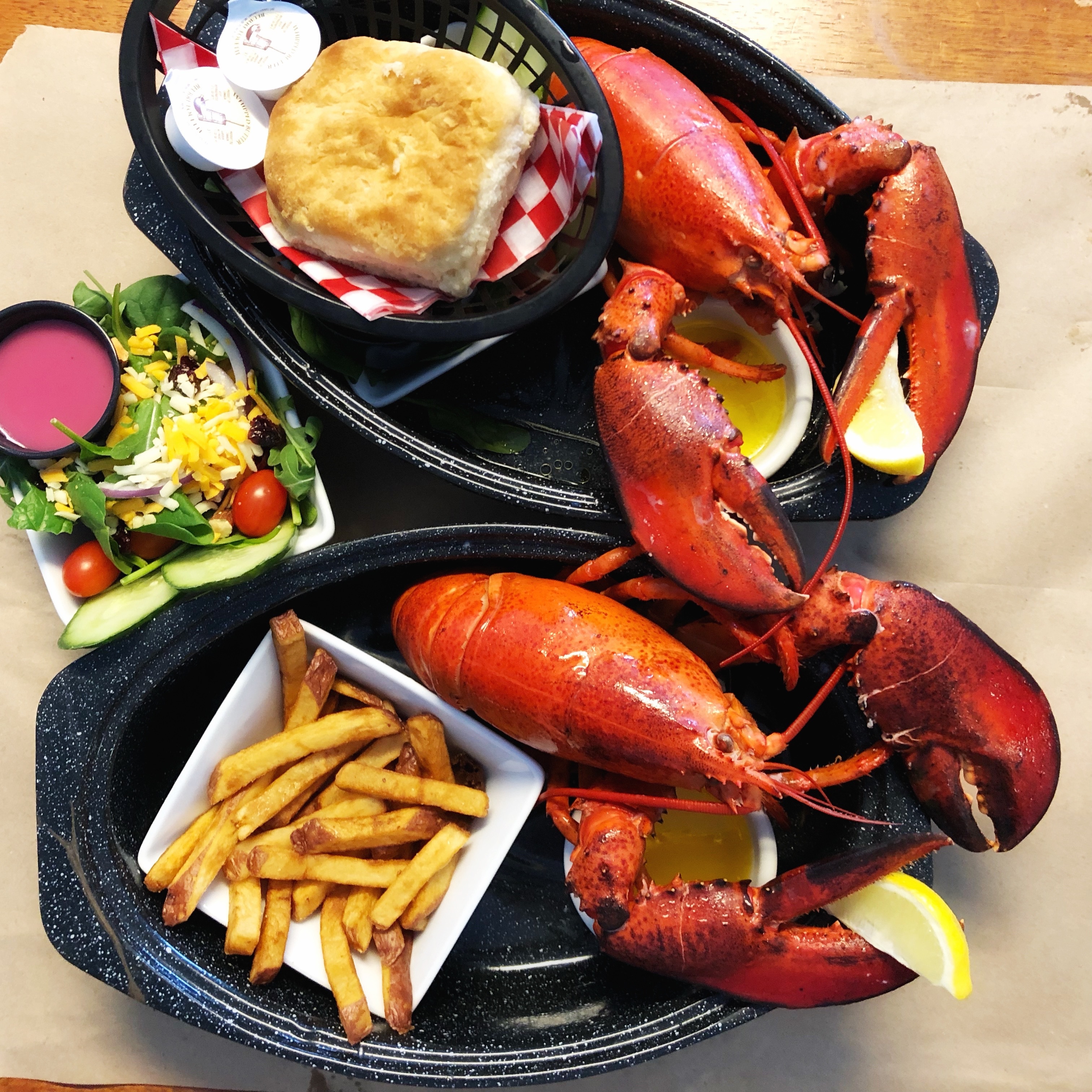 Given the copious local bounty, it's no surprise that area restaurants take full advantage. In Barrington, the self-proclaimed lobster capital of Canada, Capt. Kat’s Lobster Shack (captkatslobstershack.weebly.com) knows its way around a crustacean, with a menu boasting lobster fondue, lobster poutine, lobster-topped fish cakes, and 2018's champion lobster roll. But creamed lobster is a South Shore specialty, and the interpretation here is the next best thing to home-cooking—or so I’ve been told. With chunks of fresh meat sautéed in copious amounts of butter, finished off with heavy cream, and served atop a thick slab of toast, it’s not exactly a light starter, but you can’t leave the province without giving it a taste. That, along with an impeccably steamed whole lobster, might’ve been the best meal I had all week. 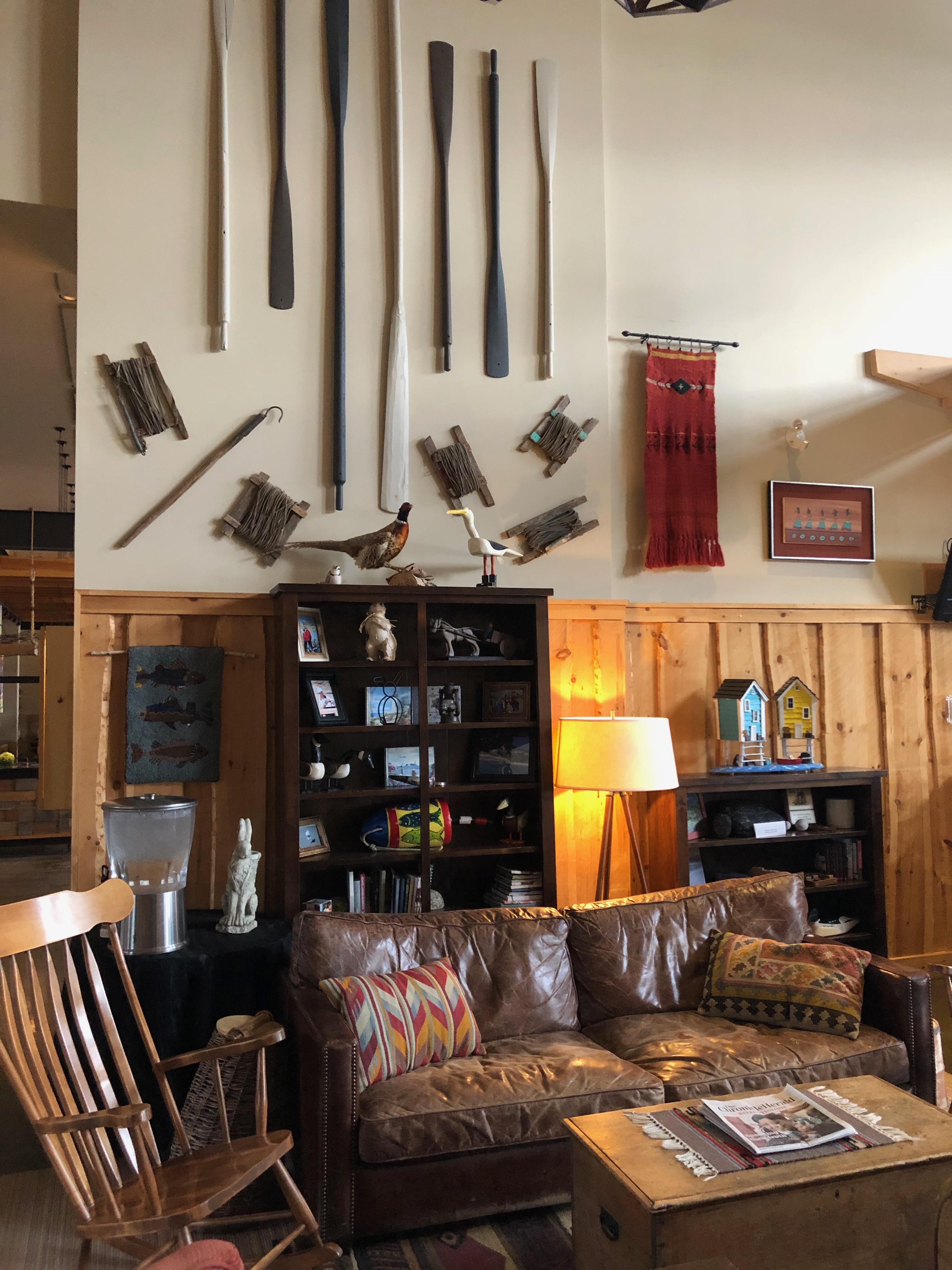 White Point Beach Resort (whitepoint.com) was my next port of call, and its airy, light-filled lodge offered a warm welcome, with windows facing the Atlantic, a towering stone fireplace, and cozy armchairs and leather sofas practically begging guests to sink right in and stay while. (As an added bonus, its grounds are populated by bunnies that appear out of nowhere when you proffer treats, and who doesn't love bunnies?) Lobster-themed s’mores—chocolate-dipped, lobster-shaped sugar cookies in lieu of graham crackers, and marshmallows roasted on a roaring fire—capped off the night.

It was lobster-boat day, and my alarm went off just as the sun was cresting over the horizon. Those fishermen who'd already been out for hours in the dark, cold morning deserve every penny they're earning—a feeling that only got stronger the more time we spent onboard, especially when my digits felt like they might be in danger. But Captain Brad Crouse was a gracious host, with an easy smile and a steady hand on the wheel, and his operation a well-oiled machine. The tiny crew worked quickly and efficiently to pull the traps and measure their catch, tossing back the too-small specimens and banding the larger ones’ claws, re-baiting the traps, and pushing them off the stern and back into the sea. 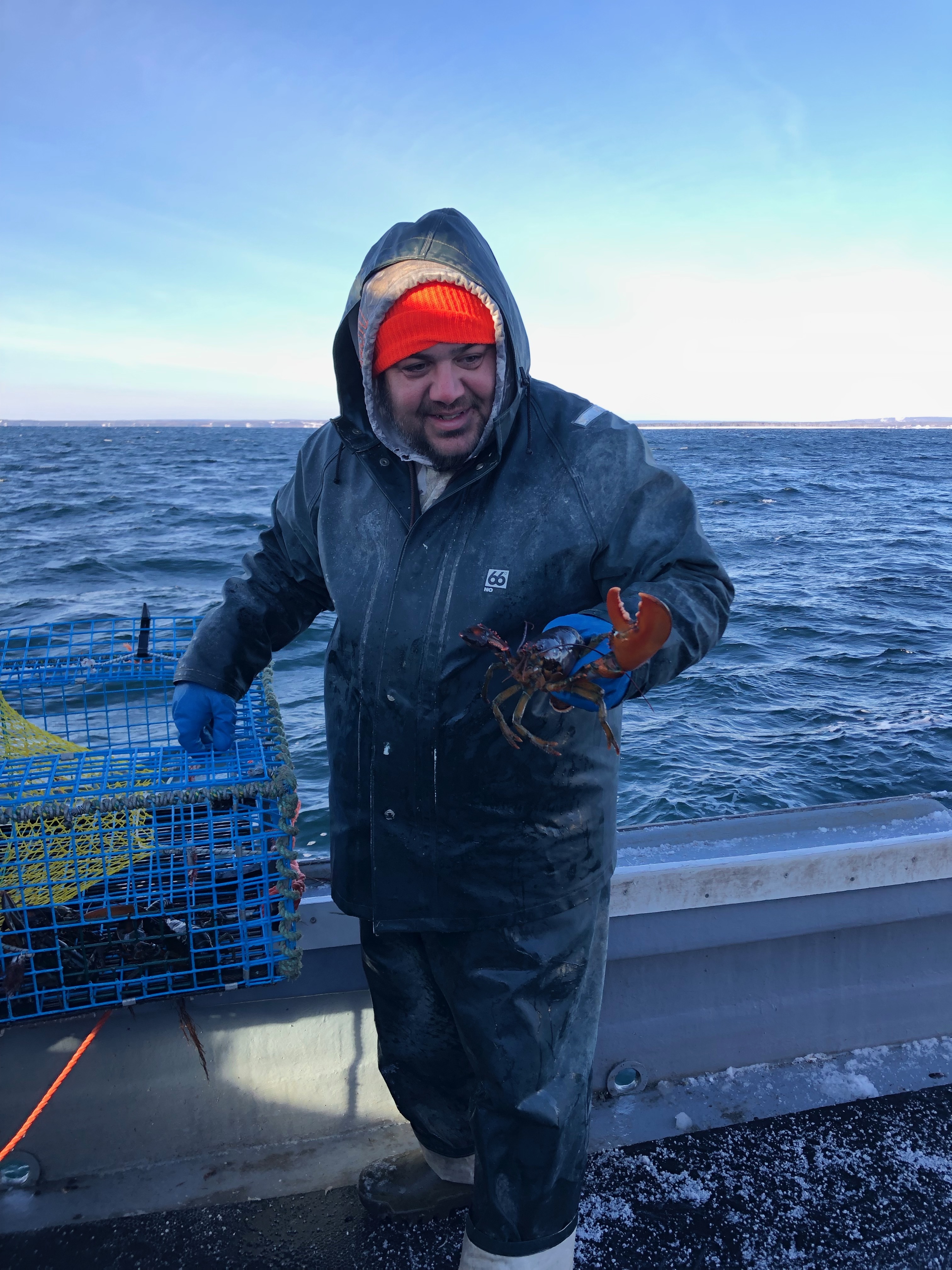 On the roster of festival activities this chilly Sunday was a Lobster 101 seminar with Atlantic Canada's tartan-clad culinary ambassador, Alain Bossé. A high-profile cookbook author, consultant, and educator known as the Kilted Chef, Alain took the small crowd through the ins and outs of lobster biology—unsettling mating habits and all—before detailing how best to store and prepare your catch for prime consumption. And then, finally, we were on to the main event: the lobster-roll contest. 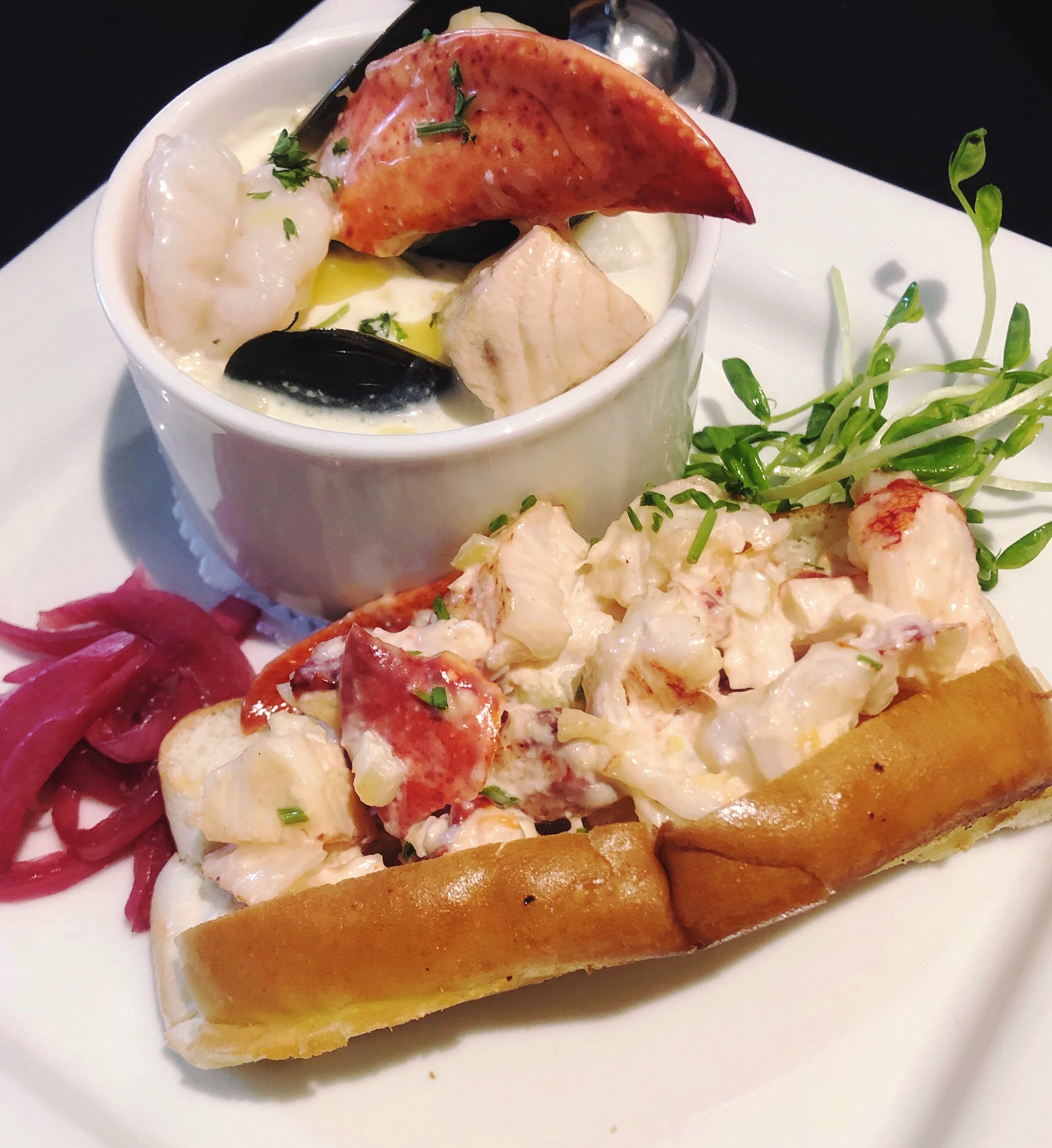 The winning lobster roll, from 27 South in Bridgewater. (Maya Stanton)

Lobster rolls are one of my favorite things to eat, so I was beyond excited to sit on the panel of judges for this year's contest. The variety on display was remarkable: There were rolls with finely chopped meat and rolls with huge chunks of tail and claw, rolls with arugula and with plain old lettuce, rolls with too much celery and with just enough chives. There was one with an Asian-inspired slaw, and one dotted with mixed herbs. Ultimately, and in a surprise upset, our favorite (above) came from 27 South (facebook.com/twentysevensouth) at the Bridgewater Best Western. The chef claimed his secret was the lobster-infused mayo, but whatever it was, I wanted seconds. 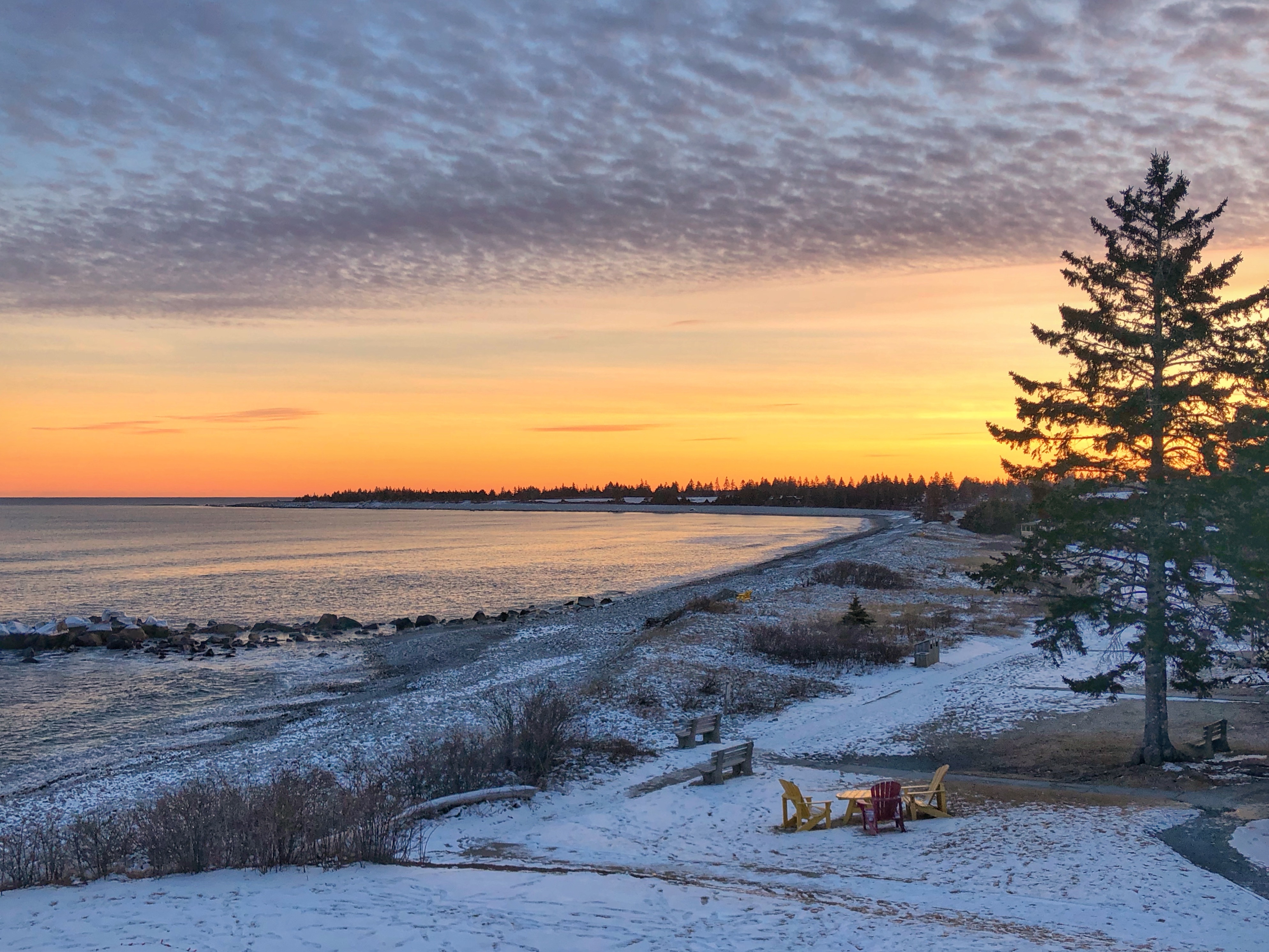 Sunset over the Atlantic. (Maya Stanton)

In a fitting bookend to the day, the winner was announced and the contest wrapped up just as the sun was setting—I’d watched it come up, after all, and it’s not often I’m awake that early. I stepped out onto the property’s elevated deck to take in the show.

On our final morning on the South Shore, we drove northeast, bound for The Port Grocer (theportgrocer.ca), a quaint, all-purpose café, market, post office, and gift shop in Port Medway. After coffee, salads, and seafood chowder, we got to the reason for our visit: a garlicky, cheesy, tender crust topped with chunks of lobster and sprinkled with finely chopped parsley. Most seafood pizzas overpromise and underdeliver, but this one holds up to the hype—and it’s developed such a loyal following that the proprietors can’t keep them in stock. 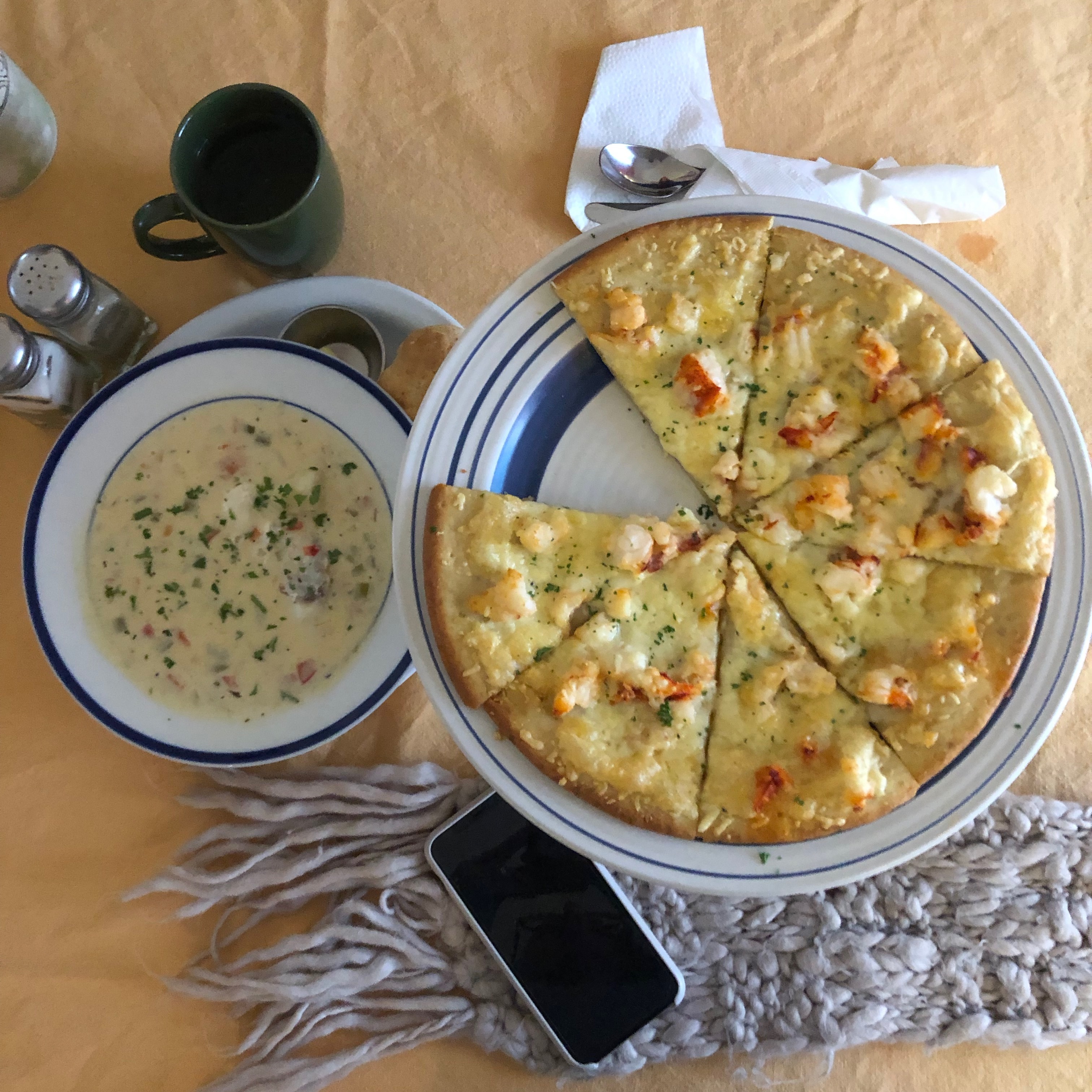 The Port Grocer's lobster pizza, worth every bite. (Maya Stanton)

We took the scenic route back to Halifax, checking out Port Medway’s circa-1899 lighthouse (a Registered Heritage Property), Mahone Bay’s colorful waterfront, known for its Three Churches, and Chester, an upscale community with breathtaking homes. It was a relaxing end to a jam-packed, lobster-filled trip, and I’m plotting a return for the seafood alone—but next time, I’ll bring the right boots.