When cruise ships change locations, like many will in the coming months, passengers going along for the ride often score remarkable deals.

Many cruise ships are like snowbirds, heading to warmer climates when the weather begins to get chilly. The annual migration is an opportunity for travelers seeking affordable cruises, often on itineraries that cross entire oceans, with plenty of relaxing days at sea en route.

Right about now, when the departure dates for these cruises are in the near future, and when many ships poised to change locations still have abundant availability, is an ideal time to search for deals. Prices may dip even further at the very last minute, but by then it's likely to be more difficult to book inexpensive airfare to and from the beginning and end ports. So in terms of getting decent deals on autumn repositioning cruises and flights alike, now's as good a time as any.

CruiseCompete makes it easy to browse all sorts of repositioning cruise specials in one spot, including 14 special one-way sailings between September and the end of the year. A 20-night cruise on the MSC Opera, for instance, sails on November 10 from Venice bound for Buenos Aires, with stops in A-list destinations Barcelona, Casablanca, and Rio along the way, and prices starting at $1,299 per person. The Carnival Magic, meanwhile, departs Barcelona on October 28 and hits Palma de Mallorca, Malaga, and Grand Turk before ending up in Galveston, Texas, 16 nights later. Rates for that itinerary start at just $861.

A helpful CruiseCritic post also gives a primer on repositioning cruises for the fall of 2011, including a list of a half-dozen sailings. While the price is often right with such cruises, the itineraries aren't for everybody, as CruiseCritic notes:

For some passengers, spending days on end in the middle of nowhere -- particularly on ocean crossings -- is more maddening than it is relaxing. Plus, repositioning voyages tend to be long (some nearly a month!), which limits them to retired seafarers and the lucky few with a decent amount of vacation time.

Confessions of a Cruise Ship Musician

The tragic sinking of a Russian riverboat on Sunday that killed at least 113 people, many of them children, brings to question the safety standards of river cruise ships, especially those operating on Russia's Volga River. But the ships that U.S. river cruise operators deploy between St. Petersburg and Moscow are much larger and safer than the ship that sank much further east on the Volga, those operators say. The twin-deck Bulgaria sank at 1:58 p.m. local time on Sunday in the Tatarstan region of Russia en route from Bolgar to the port city of Kazan, which is 450 miles east of Moscow. The 56-year old riverboat had a maximum capacity of 120 passengers, but was carrying 207 people aboard, Russian news agency Ria Novosti reported. "Ours are much larger ships" than the Bulgaria, noted Richard Marnell, SVP of marketing in North America for Viking River Cruises, which owns and operates four river cruise ships in Russia. Ria Novosti reported that the ship had passed a regular technical inspection on June 15 this year, bringing into question oversight of Russia's river cruise industry. In response, Viking's Marnell assured that Viking's ships are "operating at the highest standard." In Russia, the 210-passenger Viking Pakhomov was just relaunched this year after undergoing a bow-to-stern renovation like those of its sister ships, the Viking Surkov and Viking Kirov, which relaunched in 2008 and 2009, respectively. Next year, the Viking Peterfof will be relaunched after being renovated. "Our partner in Russia is a large, established shipping company," noted Guy Young, president of Uniworld River Cruises, which this year launched a newly renovated ship on the Volga, the 206-passenger River Victoria. "They have over 150 years of experience in navigation, employ thousands of people and have their own ship yards. The ships are extremely well maintained and they comply with all safety regulations. This is a very different company than the small operator that was sailing the Bulgaria." Ama Waterways also this year started sailing the revamped 212-passenger Amakatarina. More from Budget Travel: Just Back From... a Russian River Cruise River cruise growth outpacing ocean cruises Rivers wreaking havoc: Mississippi too high, Rhine too low

Following the news this week that Princess Cruises has canceled calls in Puerto Vallarta, the Mexican beach destination assured it remains safe for tourists. "Puerto Vallarta is a leading cruise destination in Mexico and continues to offer a wide range of shore excursions and a safe experience for all cruise passengers visiting its port from around the world," the Puerto Vallarta tourism board said in a statement this week. Princess Cruises canceled its calls in Puerto Vallarta on three Sapphire Princess sailings: Nov. 19, Dec. 10 and Dec. 31. "Our security department continues to monitor the actions taking place in specific areas of Mexico. As the safety and security of our passengers and crew is our highest priority and based on the continued violence in these areas, we've made the decision to cancel our calls to Puerto Vallarta and Mazatlan," the cruise line said in a statement. Those departures will instead include a two-day call in Cabo San Lucas and Ensenada, Mexico. In April, the U.S. State Department issued a travel warning that outlined areas throughout Mexico where there have been reports of crime and violence. For the state of Jalisco (Puerto Vallarta is located in Jalisco), the State Department said that official U.S. government employees are prohibited from traveling to the cities of Colotlan and Yahualica in Jalisco, "because of an increasingly volatile security situation." It also stated that "border areas between Jalisco state and the states of Zacatecas and Michoacan, as well as in or near the cities of Tepic and Xalisco, Nayarit have been sites of violence and crime involving TCOs. You should exercise extreme caution when traveling in these areas." (TCOs stand for transnational criminal organizations.) However, there was no mention of Puerto Vallarta in the State Department's travel warning. The Puerto Vallarta tourism board said in a statement that it was "sorry to learn of Princess Cruises' recent decision," but referred to a recent security assessment study conducted by security consulting firm Thomas Dale &amp; Associates, which found that the number of negative events involving foreigners or non-foreigners in Puerto Vallarta is fractional compared to the millions of visitors that vacation in Puerto Vallarta annually. The study also found that visitors to the destination feel safe and continue to visit Puerto Vallarta repeatedly. The Puerto Vallarta tourism board said that despite Princess' decision it "looks forward to welcoming Princess Cruises and its passengers to Puerto Vallarta again in 2012." More from Budget Travel: One incredibly delicious reason to be grateful to Mexico The ideal vacation: Indulge or detox? What's your worst "lost luggage" story?

Last Friday, Adam Goldstein, the CEO of Royal Caribbean, used his blog to respond to the following question from a customer: "Why don't you plan stops on certain ports for the whole night?" Here's what he had to say: Thank you for your feedback. You are right, a day might not be sufficient time to experience all there is to see in some of the wonderful cities that we visit around the world.... Many factors go into this including operational considerations such as how far the port is from other ports and if we stay later would we still be able to reach the next port of call. Usually if we spend more time in one port then we will spend less time in another port. Or in the case of an overnight it could mean not including another port on the itinerary. The Deployment team has to balance these considerations. Royal Caribbean is far from alone in rarely staying overnight in ports. All the major cruise lines try to visit as many ports as possible. There are exceptions of course. Goldstein points out that a few Royal Caribbean itineraries include overnight stays in a port, such as St. Petersburg, offered by Jewel of the Seas; Venice, offered by Voyager of the Seas and Splendour of the Seas; and Istanbul, offered by Vision of the Seas. Cruises visiting out-of-the-way Bermuda also tend to include overnight stays. if (WIDGETBOX) WIDGETBOX.renderWidget('11410cbd-3771-411f-8982-551b5d1a9975');Get the Poll Creator Pro widget and many other great free widgets at Widgetbox! Not seeing a widget? (More info)But, as I said, those are exceptions. Almost no Caribbean itinerary includes an overnight stopover. Not offending the locals may be one reason that ships skip port. For instance, the government of the Cayman Islands opposes gambling, and cruise lines would be quite unhappy to have to shut down their casinos while in port, losing precious hours of profit. In other Caribbean countries, there may be concerns about the nighttime noise level coming from the cruise ships. At the end of the day, the reason why cruise ships almost never stay in port overnight is because most passengers don't seem to mind spending nights at sea. What do you think? Would you like to stay overnight in one port on your next cruise? Or do you like the way cruise ships schedule their itineraries now? Please vote in our poll. And feel free to sound off in the comments. MORE FROM BUDGET TRAVEL Vote Now for the World's Best Cruiser! Mega-Cruise Smackdown Confessions of a... Cruise Ship Musician 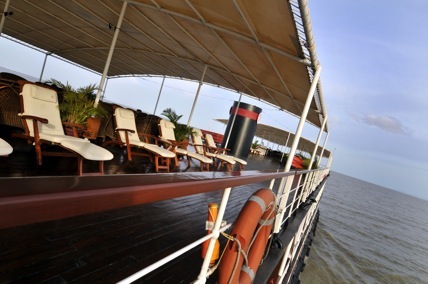 A flood of new ships to sail the Mekong

The Mekong River meanders between some of the most scenic and notable destinations of Southeast Asia, so it's no wonder that river cruise companies are increasingly realizing the opportunity to view them from one of the best vantage points &mdash; the river itself. Suddenly, a flood of new river cruise ships are being built to sail the Mekong, with itineraries that include Siem Reap in northeastern Cambodia, the site of the sprawling Angkor Wat temple complex, Phnom Penh, the bustling capital of Cambodia, and Vietnam's Ho Chi Minh City, complete with small fishing villages and floating markets along the way. Many also include or offer the option to tack on a visit to Hanoi, the capital of Vietnam, and the picturesque Ha Long Bay on the South China Sea. Avalon Waterways is the latest company to announce that it will have a new ship on the Mekong, the 32-passenger Avalon Angkor, which will launch next spring. The Avalon Angkor will sail a 14-day "Fascinating Vietnam, Cambodia &amp; The Mekong River" itinerary from Ho Chi Minh City to Bangkok, priced from $3,819 per person, not including international airfare. But until then, there are plenty of new river cruising options already sailing the Mekong this year. Ama Waterways sails the 92-passenger La Marguerite, which launched in September 2009, and has a second ship, the 124-passenger AmaLotus launching in early fall. Ama's 16-day itinerary from Hanoi to Siem Reap starts at $3,398 per person, not including airfare. Later this year, Pandaw River Cruises, a Singapore-based river cruise line with head offices in Scotland, will unveil its fourth Mekong River ship, the 60-passenger River Saigon, which is being chartered by Uniworld River Cruises. Pandaw already sails the Mekong Pandaw, Tonle Pandaw and Indochina Pandaw on the Mekong River through Vietnam and Cambodia. Starting next year, Lindblad Expeditions will also be offering Mekong River cruises on the 48-passenger Jahan, a ship owned by the Vietnamese company Heritage Line. The 14-day itinerary will include stops in Angkor Wat in Cambodia and Ho Chi Minh City, Vietnam. Rates start at $7,980 per person, based on double occupancy. More from Budget Travel: Better than Ha Long Bay, Vietnam? Cambodia's Comeback River Cruises: Into the Heart of Europe