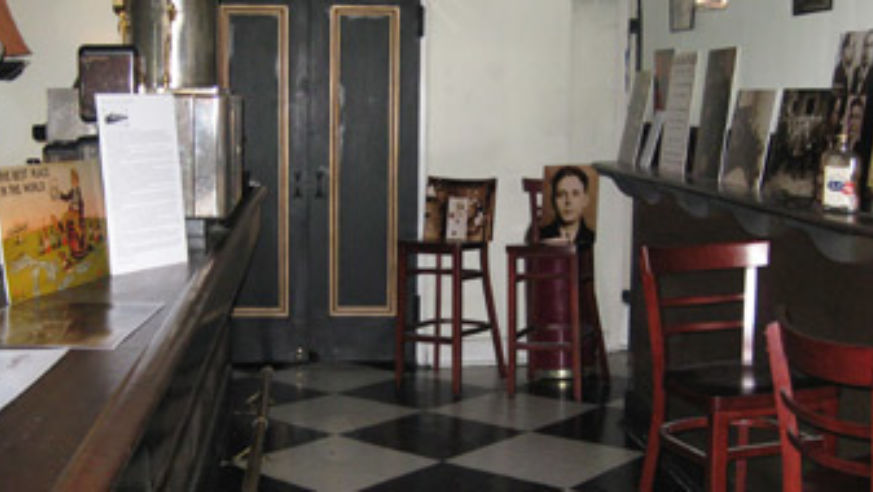 Kate Appleton
A secret door led those-in-the-know to this speakeasy, where a young Frank Sinatra worked as a waiter

Given the recent infatuation with Prohibition-style bars, the timing seems about perfect for this small new museum that shines light on the role of bootleggers and gangsters in the 1920s and throughout U.S. history. It's located in a once-notorious speakeasy at 80 St. Marks Place, which happens to be down the block from one of the city's new-wave speakeasies, PDT (enter through a phone booth in Crif's Dogs).

The museum's main gallery won't be ready until late April or early May, but co-founder and curator Lorcan Otway has started giving informal preview tours that draw on his personal connection to the building—his father bought it from gangster Walter Scheib in 1964.

When I stopped by last weekend, Otway gathered us in a group by the mahogany bar, lined with artifacts including vintage whiskey bottles, a Tommy gun, and newspaper clippings and photos. He told us that shortly after the purchase his father came upon two locked safes in the basement. "He called Walter Scheib, and said he was too curious to own a building with locked safes and too cautious to open them without him," said Otway. Together they uncovered $2 million in gold currency meticulously wrapped in newspaper.

Armed with hard hats, we went down to check out the basement's series of rooms, including a beer locker and the office of Scheib's partner, Frank Hoffman, who rigged it with a near-impenetrable door, radiator bars with copper wiring, and a phone system so that bartenders could alert him in the event of an FBI raid. We learned Hoffman also paid off business owners along First Avenue in order to dig a series of tunnels out through their basements onto the avenue.

Otway and the museum's co-founder, historian Eric Ferrara, are still uncovering new stories about what went on in the speakeasy. They've got ambitious plans for neighborhood walking tours (launching tomorrow, April 1) and eventual workshops, lectures, and historic reenactments.

Even the bar will be back in business soon—they've applied for a liquor license—which will also be dandy for patrons of Theatre 80, with which the museum shares the building.