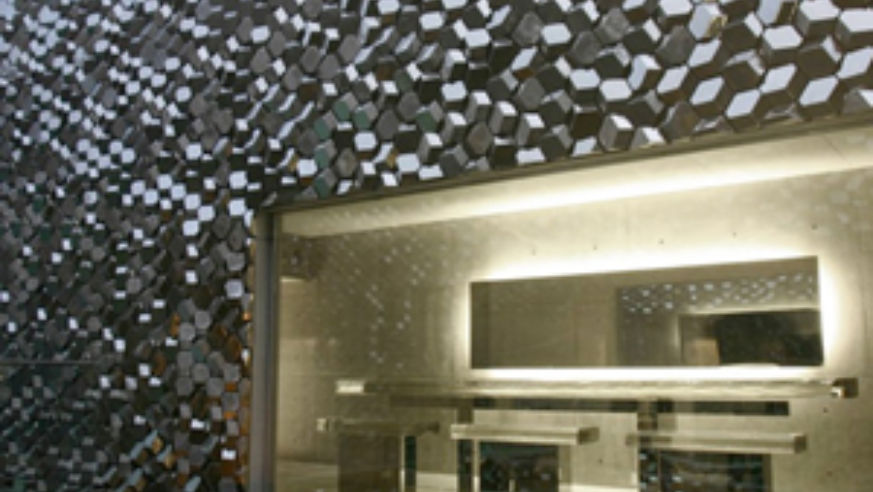 ›Boston: Why is the Charlie Card awful? If you've ever visited Boston and rode the "T" (subway system), you may have wondered why the electronic card swiping system is so difficult to use. Well, local "user experience expert" Josh Ledwell has the explanation.

Above, you're looking at the Optical Glass Bar in Japan. Its metallic, fractal wall surfaces were created by the award-winning designer Olafur Elisasson and the crystalline seats shaped like frozen waterfalls were created by award-wining designer Tokujin Yoshioka. If you can't visit Japan to see it, you can go to San Francisco's MOMA to see an exhibit of similar work by Elisasson. Or you can view a Flash video of the bar at Yoshioka's website. (via +KN)

›Costa Rica says it has the world's first carbon-neutral airline. But a British blogger who has flown the airline is skeptical. He says: The airline's claim is decidedly dubious, lacks independent verification, and can't prove that the tree-planting and other eco-friendly actions it supports wouldn't have been undertaken anyway even if the airline didn't exist. Details at the Guardian Unlimited Travelog.

›Photos of Africa taken from helicopter-height. Michael and his friend Stefan Breuer fulfilled their long-held dream of flying from Hamburg to Cape Town and photographing the scenery at low levels. Their images are amazing. Check out the slide show.

›Surprising destinations for foodies: Ireland, Peru, Jordan, and other countries that you may not associate with culinary excellence have developed "gastrotours" of restaurants and markets, as well as high-end cooking schools. The ubiquitous Peter Greenberg has the details.

›Everything you know about absinthe is wrong.

Perhaps you already have your own absinthe story. You drank it in New Orleans one foggy night, too full of fumes to remember much aside from the cloudy green swirl of the drink as water drip-dropped into the glass. You smuggled a cheap bottle back from Spain and brought it out at cocktail parties like a magic trick....You sipped it in a gloomy underground Czech bar, where everyone looked like spies, and the bartender lit the sugar cube aflame.... Full story at Salon.com.

›Shanghai is becoming a major cruise destination. In 2007, the number of passengers soared 63 percent. And this year, more than 100 foreign cruise ships will visit, especially after a major new port opens in April.