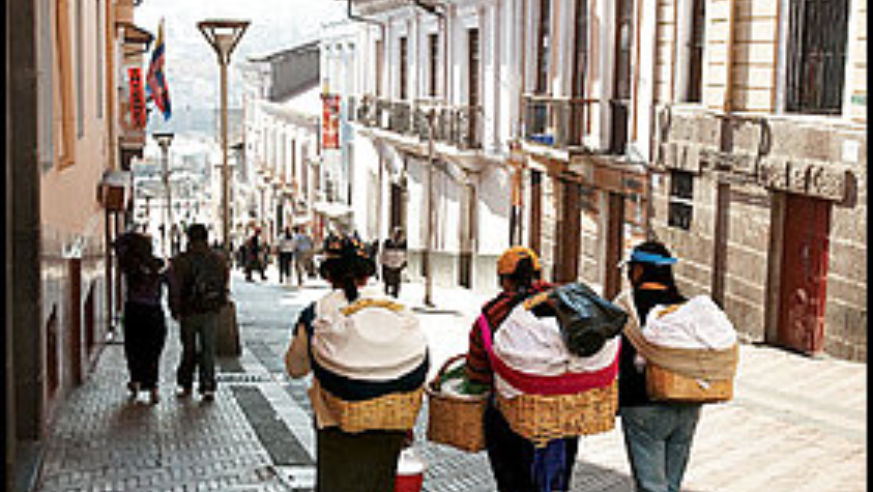 Thanks to jet-lag-free time zones and direct flights from half a dozen U.S. cities, getting right to the heart of one of these emerging destinations is easier than ever. In Quito, explore a centuries-old district that's brimming with new life.

All too often, historic capitals feel like musty museums: The spirit that once energized them is nowhere to be found. But thanks to a collective effort by entrepreneurial locals and ambitious government-sponsored initiatives, Quito's nearly 500-year-old center—100 square blocks of whitewashed buildings and wrought-iron balconies—is getting its second wind. In fact, the UNESCO World Heritage Site hasn't been this vital since its 1950s heyday, when La Ronda, a 17th-century pedestrian way (officially called Calle Morales), served as home base for the city's vibrant community of artists and intellectuals.

When 24-year-old Pablo Arregui was searching for a place to relocate his high-end ceramics, sculpture, and jewelry shop, Mucahua, from the city's suburbs last year, La Ronda perfectly fit the bill (Calle Morales 692). "We chose this location because we wanted to have a real relationship with the street," Arregui explains. Along with several other neighboring boutiques, Mucahua stays open until midnight on weekend evenings to welcome gallerygoers strolling through the area and sipping canelazos (a hot drink made with aguardiente, cinnamon, sugar, and lemon juice). "La Ronda is back on the cultural map," he says.

That was hardly the case a few years ago. Increasingly seedy elements had taken over, and in 2006 and 2007, the government funded a complete restoration of La Ronda's cobblestoned roadbed and installed dozens of new streetlights. The sweeping changes to Old Town paved the way for hotel development and small-business owners. One of the many new properties that have reclaimed grand, centuries-old buildings, the 25-room Hotel Plaza Sucre opened last May in a 19th-century structure two blocks from Plaza Grande, the district's main square (hotelplazasucre.com, from $133). Its original colonnaded atrium has been restored, and paired with a punchy mix of contemporary Ecuadoran paintings and pre-Columbian carvings. Visitors find a similar juxtaposition of old and new in the 2-year-old Centre for Contemporary Art, which showcases hypermodern graphic murals alongside the 100-year-old curves and pristine wood floors of what was once the city's military hospital (corner of Luis Dávila and Venezuela, revolucionquito.com).

A few blocks uphill from the museum is the 2-year-old Ecuadoran-fusion restaurant El Ventanal, whose name translates to "picture window" (elventanal.ec, entrées from $5). The glass walls of the dining room look out on sweeping views of the city, from the iconic Virgin statue on Panecillo hill to Old Town itself.

Like fellow shop owner Arregui, third-generation hatmaker Luis López takes an active role in the neighborhood. López has a workshop in the back of his store, Loba Humacatama, where he can be spotted most days constructing his signature pieces—dramatic women's hats with brims as broad as five feet—on antique hat forms inherited from his milliner grandfather (Calle Morales Oe1-130, hats from $20). As with much of what's happening in Old Town these days, the hats are a fitting blend of time-tested craftsmanship and bold, modern flourishes.

KEYS TO THE CITY

Transportation News
Coming soon: A new international airport with four times the capacity of Mariscal Sucre is set to open in mid-2011.

Next! Nightlife in Buenos Aires >>