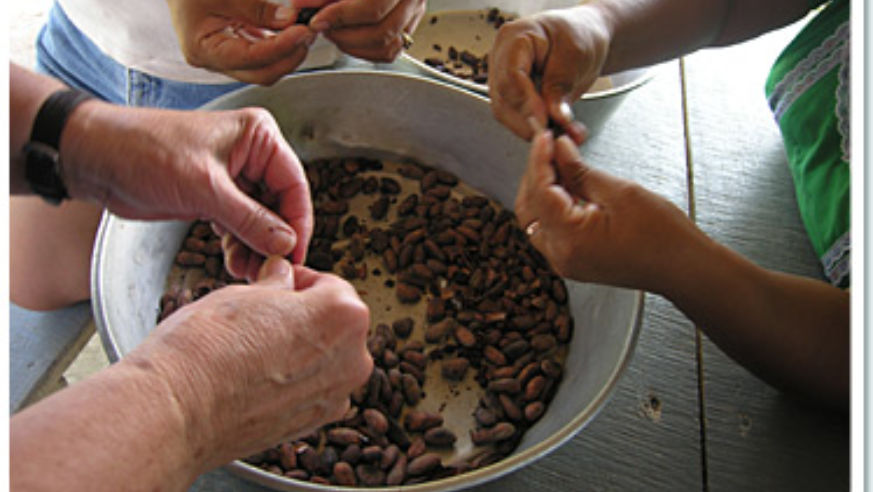 Mayan kings once traded cacao seeds as currency and drank them in a spicy, sacred beverage. Now, Mayan farmers are cashing in, thanks to the world's growing appetite for specialty chocolate.

Belize's remote southern Toledo region doesn't make it onto many tourist itineraries, but it was at the top of mine this summer. The guidebook I write was due for an update, and I was eager to check out reports of chocolate tours and hands-on lessons offered at farms spread across Toledo's lush hills and valleys. My wife and mother-in-law didn't take much persuading.

In San Felipe, a village of about 65 homes, we meet up with Cyrila Cho, whose family has been farming chocolate for generations. She quickly disappears among the cacao trees and emerges with an oblong yellow pod from a trunk. She splits it open with the whack of a club and presents me with the goo-covered seeds. I imitate her by removing one, placing it in my mouth, sucking off the sweet-tart pulp, then spitting the seed to the ground. The pulp doesn't taste at all like chocolate, which is made from the seed.

Cyrila leads us into her cramped concrete kitchen, where a pile of dried, roasted, and peeled cacao beans lies on an old grinding stone. "With this matate I raised six children," she says, as she leans into the stone with all her weight. The beans shatter and mix with the wild vanilla, allspice, and sugar she has added. A savory odor lingers in the air.

The Chos have found a way to connect ancient cacao farming with the modern craze for quality, fair-trade products. Their five-hour chocolate tour begins with a visit to son Juan's organic cacao farm. He sells to the Toledo Cacao Growers Association, a nonprofit coalition of about a thousand small farms that sells to acclaimed chocolatier Green & Black's. The tour then moves to Cyrila's home, where she and her daughter lead a Mayan chocolate-making session.

Just down the road, on the banks of the Moho River, the Cotton Tree Lodge produces its own brand of chocolate. The one-room, 100-bar-a-day operation has refrigerators and special chocolate-blending ("conching") machines powered in part by solar panels. Cotton Tree runs weeklong chocolate packages and day trips that give guests a chance to tour a nearby cacao farm before heading to Cyrila's to peel toasted cacao beans while sipping on pinnul, a traditional cacao-and-corn drink.

The work is slow going. My wife, my mother-in-law, and I need more than 30 minutes to peel enough beans to be ground into a single bar of chocolate. Afterwards, we take turns on Cyrila's matate until the oil of the seeds adds a shiny luster to the brown paste. When it's sufficiently creamy, she will pour the thick substance into molds and set the bars out to harden. But we've got to press on. We buy some previously made chocolate and cocoa powder, say goodbye to Cyrila and her family, and continue down the trail.

Chocoholics, Take Note
Toledo is about a 50-minute plane ride from Belize City. The alternative, a roughly five-hour drive, isn't bad now that the Southern Highway has been improved. The final nine-mile stretch of dirt is being paved, and daily express bus service is offered on school buses painted with Rasta colors based in Punta Gorda.

The Third Annual Cacao Fest, May 22-24, 2009, will celebrate all things chocolate by offering a host of local products—from cupcakes and kisses to cacao wine and chocolate cocktails—as well as numerous cultural events.

Nature's Way Guest House offers eclectic wooden rooms with a fan and shared bath (one room has a private bath). This is Punta Gorda's best backpacker option, with its own links to cacao farmers and Mayan villages (011-501/702-2119, natureswayguesthouse@hotmail.com, double from $17).

Hickatee Cottages is an award-winning, green bed-and-breakfast almost two miles outside Punta Gorda, right up against the jungle (hickatee.com, cottage from $75).

Coral House Inn, on the highest point of Punta Gorda's shoreline, has four rooms overlooking the Caribbean, a small pool, and a bar area (coralhouseinn.net, double from $83).

Joshua Berman is the author of Moon Handbooks Belize.