Our readers tell off the airlines 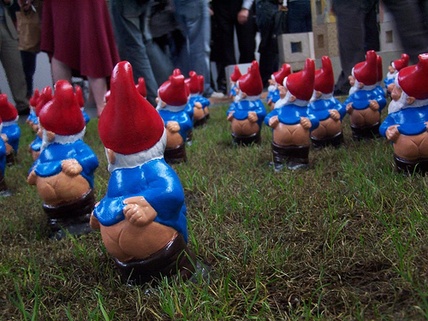 We recently asked readers of this blog: "Which airline do you refuse to fly, and why?" We received about 40 responses. Nearly every airline got zinged. (Click here to join the fracas.)

Roughly half of the 40 readers cited rudeness by flight attendants and gate agents as something that would cause them never to fly an airline again.

In other words, these travelers would rather pay more to fly another airline than give business to an airline that has treated them rudely. Yes, they may be willing to skimp on other services in exchange for a cheaper fare, but rudeness is intolerable.

This is not a breakthrough revelation, of course. Other more comprehensive and scientific surveys of customer satisfaction have no doubt found the same result. You might think that the airlines would respond to such complaints by setting up systems for 1) collecting data from passengers about any incidents in which they felt they were rudely treated; 2) if there are a lot of complaints about a particular flight, identifying which flight crew or gate agents were serving that flight; 3) rewarding employees who receive favorable comments and insisting on re-training for employees who are criticized by passengers. After all, the airlines track data on everything else. Why not track data on this major customer concern?

A second major issue among our readers is a repeated failure by airline staff to communicate accurate information to passengers when a problem (such as a flight delay) happens.

Misinformation compounded with more misinformation will sometimes make passengers mad enough that they're ready to break some furniture. Consider the following story from a reader:

I refuse to fly Alitalia - It's too bad the national airline of Italy is such a disgrace. My parents were stuck in Milan for 3 days because the flight crew just didn't show up for the Pisa - Milan flight. There was a near-riot in the Milan airport as security was called in to control the crowds. The most angry travelers? The Italians! We saw a man reach across the desk of an Alitalia employee and throw a monitor across the floor.--Laura Beckett

Perhaps the most poignant story from our readers was this one:

I refuse to ever fly Northwest again. I got news that my grandmother was dying in Athens,Greece and I rushed to find ANY ticket I could in order to see her in her last moments. My flight was supposed to leave Newark at 6:00pm on Wednesday. Once at the gate, we were told there was a slight delay until finally at 10pm we were told that the plane "broke" and a crew was being flown in from Detroit to "fix" the plane. Supposedly we would be leaving at 6am the next morning. We finally left at noon the next day and flew into Amsterdam, which was part of my original itinerary in order to change planes and fly onto Athens. We landed in Amsterdam at 11:00pm Thursday night and it was too late for a flight onto Athens so we were put up in a hotel until the next morning. I made it to the airport by shuttle the next morning, where I was told that all flights to Athens on the plane I was supposed to take, were booked. I ended up in Paris. I finally ended up in Athens on Friday evening which by then it was too late to see my Grandmother. I will never ever fly Northwest again.--Posted by: Marina 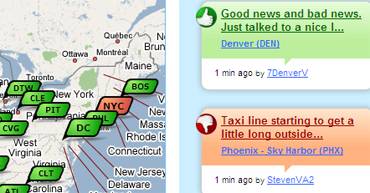 Stuck in an airport line? Spread the word!

Hundreds of Orbitz.com customers pass through national airports on an hourly basis and, as of today, the online travel agency is putting them to work. The cool new application OrbitzTLC Traveler Update allows travelers to access and share real-time information from a laptop or from a mobile device at mobile.orbitz.com. (Note that you don't have to be a customer to view the information or even to submit an update.) Posts, tagged with a thumbs-up or thumbs-down icon, can alert travelers to which security lines to avoid, which local highways are clogged, which taxi station is speediest, which flights are delayed and which are calling for bumped passengers&hellip;what isn't there to sound off about lately? There are dedicated pages for more than 40 major U.S. airports, each with the just-launched traveler updates as well as traffic information from Yahoo, Google maps, security wait times as averaged monthly by the TSA, delays reported by the FAA, and tips on weather, parking, and where to find WiFi access. Travelers' comments are fed through a spam filter to weed out the vulgar or irrelevant, but Orbitz has no way of verifying that a user is, in fact, at the airport that they are posting about. Like many other sites relying on user-generated content, Orbitz counts on users to rate tips for their quality and plans to offer discounts on future bookings to the most frequent and highest-ranked Traveler Update contributors. One more perk: if you've signed up for Orbitz's travel alerts, you'll now automatically be receiving these traveler updates, too. Related: Sign Up For Those Flight Alerts 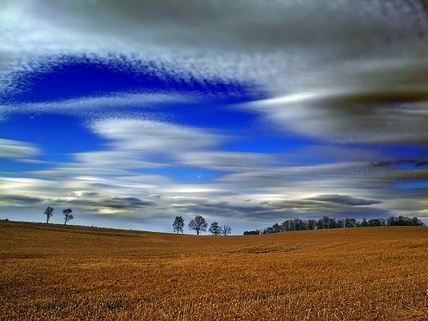 How accurate is the weather forecast?

Take The Weather Channel, for instance. How reliable is it? Well, it correctly predicts rainfall and temperatures about three out of four times.** All the other major weather companies and the National Weather Service are about as accurate for forecasts predicting rainfall and temperatures roughly 24 to 48 hours in advance. The statistic comes from Eric Floehr. He should know, because his company, ForecastWatch, calculates how accurate forecasts are and sells the data to meteorologists and other companies. In your hometown, meteorologists may be more or less accurate than the national average, given the stability of your local conditions. You can use ForecastAdvisor.com, a website for consumers instead of companies, to plug in your Zip Code and see how accurate the top weather companies and the National Weather Service are at predicting your local weather. **According to an e-mail exchange with Eric Floehr, "Obviously there are a lot of caveats to that statement. For example, what exactly does "correctly" mean? But I think that's more detail than your readers really care about." Photo by Nicholas T. See more of his photos on his Flickr profile page.

Yesterday, the Venetian became the latest transplant to open in Macau, which has rapidly morphed into a glitzy, much-hyped gambling haven. Casinos in this former Portuguese colony--a tiny peninsula connected to mainland China and about 40 miles from Hong Kong--already rake in more money than their Vegas counterparts. American billionaire Sheldon Adelson was on hand for the obligatory smashing of a champagne bottle, in this case, against the side of a gondola, one of many floating down the gaudy casino's canals. Touted as the world's largest gambling space, the Venetian Macao-Resort-Hotel has 400 slot machines, 800 gambling tables, 3,000 rooms, and 1.2 million square feet of convention space, according to the AP. The Venetian joins a market recently crowded by casinos like the Sands, also developed by Adelson, and the Wynn Macau, yet the demand seems almost insatiable. (I happened to be in Macau in July 2005, about a year after the Sands opened, and had to wait in line just to enter the jam-packed casino on a weekday afternoon!) Gamblers have long flocked to Macau, but until 2001 they were at the mercy of Stanley Ho and his 40-year monopoly on the local casino industry. For a taste of the old-school gambling scene, make a beeline for Ho's Casino Lisboa--you can't miss it, the roof is shaped like a giant roulette wheel. Photo: Venetian Macao Related: Trip Coach: Hong Kong and Macau. 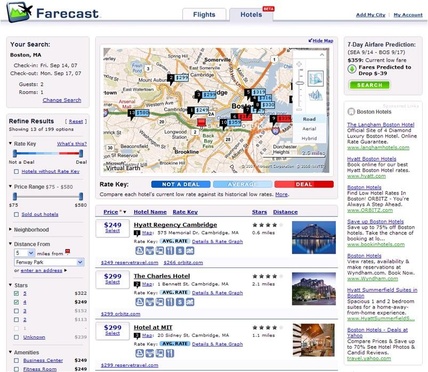 The airfare prediction website Farecast is taking on hotels, offering rate advice for major properties in 30 U.S. cities. Rather than predict rates, the site tells you if the rate at any given hotel is a good value when compared with the hotel's rate history and other factors. You plug in your dates and preferred neighborhoods to stay at your destination, and then you add your wish list of preferred amenities. The site maps hotels that meet your criteria, along with the lowest rates available and advice on whether to book one or keep looking. As explained to us by Farecast CEO Hugh Crean: If a hotel rate is highlighted in red, it means that the rate is a relatively good deal when compared with the hotel's past history, local demand, and other factors. The buying tip, called a Rate Key, tells you if a hotel's rate is unusually low given its past pricing history and other factors, such as the demand for rooms in the city on particular dates. Farecast crunches the numbers on hotel rate data that it receives from Orbitz and other sources. The site doesn't sell hotel rooms but sends you to these sources for booking. Currently, the buying tips for hotel rates are only available for 5,000 hotels in 30 U.S. cities. Also, Farecast does not collect rates directly from major hotel chains, which often guarantee the lowest rates by booking on their websites. Farecast has made its name as a website that predicts whether fares on a route will rise or fall within the next week. In July, Farecast had more than 500,000 users, according to the Boston Globe. It's the first company to bring data-mining techniques to hotel rates, giving it a head start on its competition. Earlier: A new website lets you tour European hotels from home.