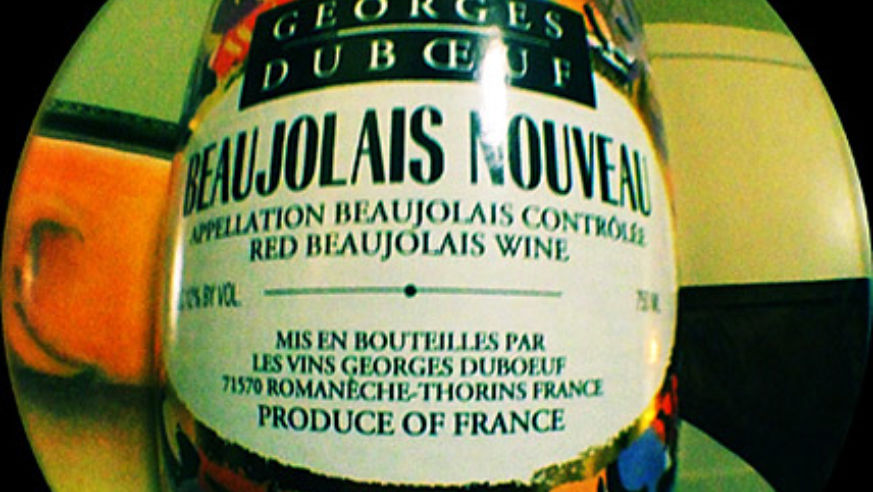 My introduction to Beaujolais wine came, oddly enough, from an Urge Overkill song. The Chicago band sings, in "Ticket to LA," about sucking on a bottle of "boojalaaaay" while riding a westbound Greyhound bus. That certainly sounded exotic to a 16-year-old in Kansas. Having no other frame of reference, I imagined this Beaujolais tasting something like the wine coolers we drank in the Taco Bell parking lot.

I wasn't wrong. Years of Paris-based wine "study" have led me to conclude that Beaujolais—at least the Nouveau variety—does indeed taste like Bartles & Jaymes. The wine is light, sweet, purple, and meant to be served cold. Thanks to the process of carbonic maceration (to accelerate the wine's aging process), it also produces famously punishing hangovers. If that stimulates your adolescent cravings, you'll be happy to know that a rosé variety (strawberry cooler, anyone?) has been recently introduced in France and Japan. I'm crossing my fingers for "orchard peach" by 2010.

Nearly 50 million bottles of this sweet stuff are now sold every year. The season begins with an official kickoff on the third Thursday of November (that's tomorrow). In the Beaujolais region of France (which also produces many fine cru like Morgon and Brouilly), there are more than 120 celebrations to mark the occasion. Global marketing maneuvers aside, this is a local harvest tradition that stems from vin de l'année—a wine created to drink almost immediately in celebration of the crop. In Lyon and smaller towns of the region, the release date will be marked by fireworks, feasts, and, of course, lots of tastings.

Bars and bistrots across Paris will also be celebrating on November 20. Walk down any street and you're likely to spot a sign proclaiming that "le Beaujolais Nouveau est arrivé!" Resistance is futile, so you may as well join in the youthful spirit and have some fun. Here are a few addresses to guide your regression:

There's a similar happening on the Péniche la Baleine Blanche—a white whale of a boat floating in the Seine. A buffet campagnard (country cookin') will be served from 8 to 10:30 p.m., and Beaujolais and beer will flow freely from an open bar all night. DJ Robi will spin with dancing until the wee hours. Entry is €20 after 10:30pm, and €30 ($38) if you arrive early for dinner. Docked at Port de la Gare, near the Simone de Beauvoir footbridge, 13th arrondissement, 011-33/1-42-52-64-31.