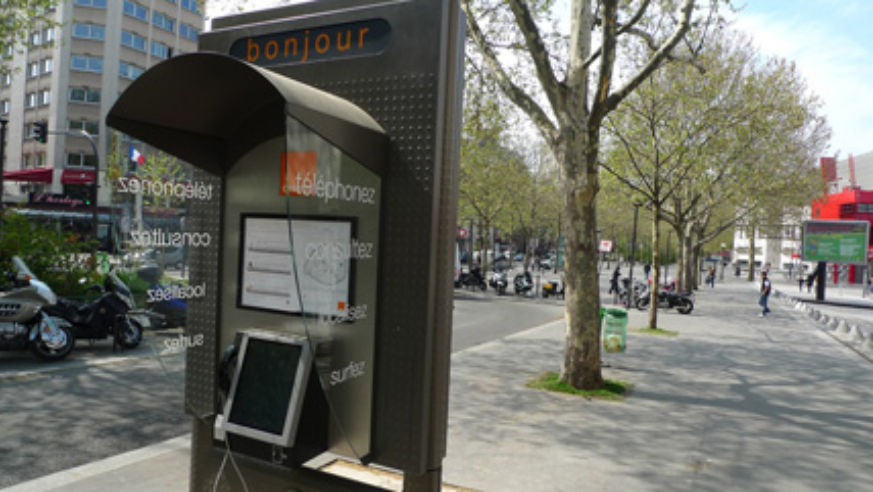 On April 9, the city of Paris and Orange telecom unveiled a dozen "experimental" phone booths that offer free Internet and multimedia services. These booths are scattered throughout the city (handy map, here), with four located in areas that have a high number of visitors — the Eiffel Tower, Montmartre, ChampsÉlysées, and the Marais.

In addition to traditional phone calls, these booths promise to let users browse the Internet and view and send emails. These two services are currently free, with log-on time limited to 10 minutes. Users can also search for local services near the booth, including restaurants, pharmacies, banks, hotels, train stations, etc. This mapping service will always be free, but there will eventually be a charge for using the Internet.

In theory, these booths could be a godsend for travelers who need to look up information, quickly check for an email, or locate a service. But how well do they really work? To find out, I took one of the new booths for a test drive yesterday afternoon and found the following:

The Surf's Not Up. For the moment, it's not possible to visit the website of your choice. Orange promises that this will change if the booths make it past the experimental phase, but for the moment your choices are limited to a handful of pre-selected sites.

The Touch Screen is Tricky. I found my email provider among the small number of available sites (Gmail, Yahoo, AOL, Hotmail) and was able, after 3 or 4 tries, to successfully enter my password using the booth's touch screen keypad. Scrolling down the page, however, was almost impossible, and composing a reply using the touch screen might take far longer than the 10-minute allotted time.

The Search Didn't Find. One of the prime services that these booths are advertising — the ability to locate nearby businesses — wasn't working when I tried to use it. I pressed the buttons to find "pharmacies" and "restaurants" and stood waiting without results until my session time expired.

It's all in French. We are in France, so I suppose this makes sense. But offering navigation in multiple languages, as is done with ATMs, subway ticket booths, and Velib' stations, would add significant value to this service for visitors.

These dozen new booths are being tested for a period of six months before evaluation by the Mayor of Paris. If the booths work well, JCDecaux (the advertising company that finances Velib') may implement them on a national level in 2012.

Where can you find these new booths in Paris?