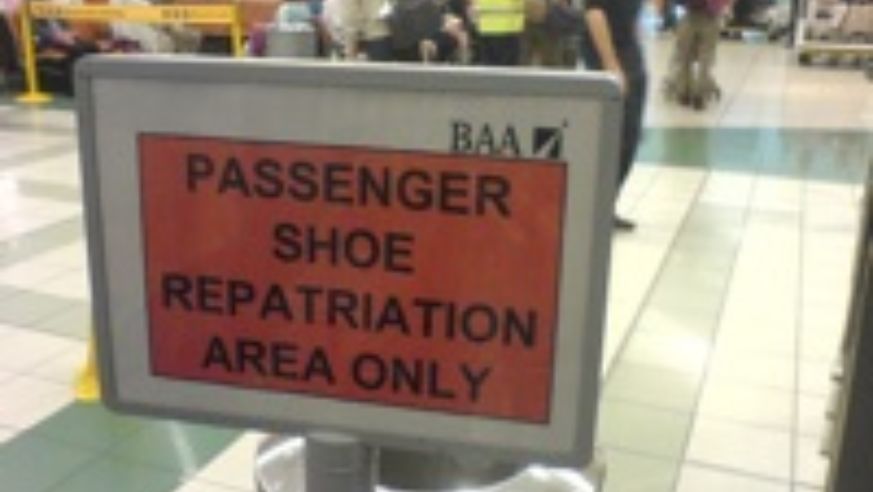 Imagine a world in which you could go through airport security without the delays of waiting for passengers to untie and retie their laces, unstrap and restrap their sandals. A world in which we could just walk straight through the body scanners with (deep breath) shoes on.

Well, that world is definitely not here yet, but it might not necessarily be too far off either, according to a recent interview with Homeland Security Secretary Janet Napolitano.

"We are moving towards an intelligence and risk-based approach to how we screen," Napolitano said during a Politico Playbook breakfast earlier this week. "I think one of the first things you will see over time is the ability to keep your shoes on. One of the last things you will [see] is the reduction or limitation on liquids."

Okay, so we shouldn't stop stockpiling travel sized toiletries and containers just yet.

Napolitano explained that "the solution to many if not all of these inconveniences is better and better technology," adding that progress is being made on the shoe front that would ultimately make it so that passengers could keep their footwear on while passing through airport security scanners and checkpoints.

If you recall, the shoe rule was created after a man tried to detonate a bomb in his shoe aboard a flight in December 2001. And since then, having to take off our shoes and put them through the x-ray machines has become yet another layer of the time-consuming process passing through airport security has become.

Can anyone even remember what it was like when we didn't have to think about lace-up sneakers versus slip-ons? Or about having to walk (gasp!) barefoot through the body scanners because we decided to travel in sandals. I’ve seen people pack socks in their handbags specifically to avoid this horror. Not to mention, a time when there wasn’t a backlog of travelers first removing and then having to sit down to replace their footwear.

What about you? How inconvenient or not do you feel that having to take your shoes off is? What have you done to adjust or make the experience easier? Let us know by commenting below.

Maybe if we could get through security faster, we'd travel more