Plan a 'Night at the Museum' 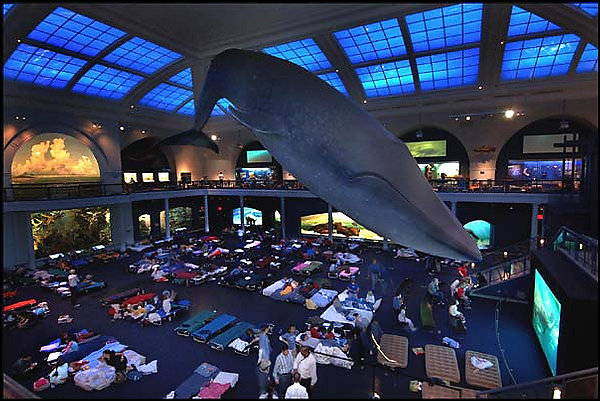 In the box-office smash, a late-night security guard (Ben Stiller) finds himself with some unexpected company when roaring lions, a T. rex, and other creatures from the American Museum of Natural History spring to life. Now you can get your own after-hours glimpse. The New York City museum, which has been flooded with requests, relaunched its sleepover program over the weekend.

Hundreds camped out under the iconic 94-foot-long blue whale, roamed the marble halls on flashlight tours, and caught screenings of the adventure film Dolphins and the space show Cosmic Collisions. Future hopefuls will have to be patient--the sleepovers are so popular that they're already sold out through June (amnh.org, 212/769-5100; ages 8-12, $79).

The movie has created a surge of interest at museums nationwide. In Chicago lately, the Field Museum has been taking more than 50 calls per day for its Dozin' With Dinos overnight program, complete with storytellers and hands-on workshops (fieldmuseum.org, 312/665-7400; ages 6-12, $47).

Kids can make plaster casts of dinosaur fossils and meet their modern-day relatives--reptiles such as snakes and tortoises--while spending the night at Camp Dino at the Natural History Museum of Los Angeles County. Butterfly Dreams and Insect Quest are among other camp offerings (nhm.org, 213/763-3535; ages 5 and up, $43).

To sleep under the stars, head to the St. Louis Science Center, where camp-ins take place under the planetarium's starry dome. In between the Omnimax movie screening and science demos, there's free time for roaming the DNA Zone or visiting dinosaurs in the ecology and environmental gallery (slsc.org, 800/456-7572, $43 for the planetarium; $38 for the main building; all ages).

Tampa's Museum of Science and Industry is hosting a special slumber party on February 16, during which the IMAX version of Night at the Museum will debut (mosi.org, 813/987-6000; $34, all ages).

Wherever you stay, be sure to BYOSB--bring your own sleeping bag!