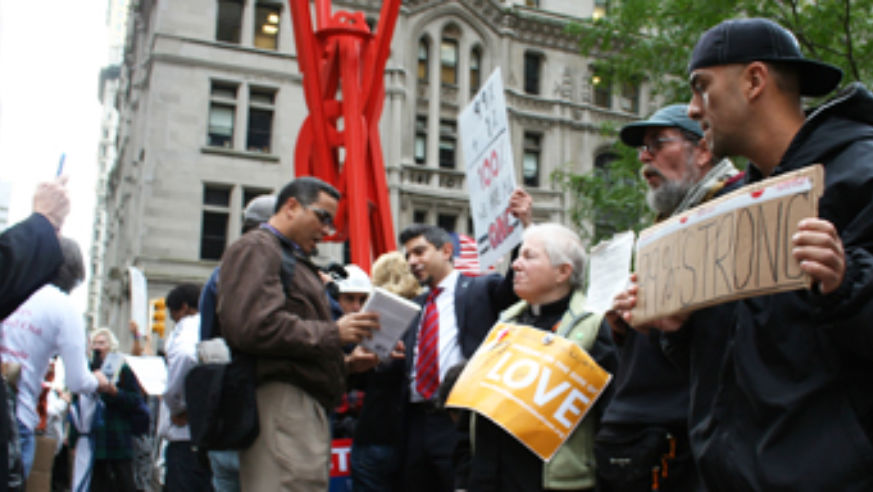 This weekend, Zuccotti Park had every hallmark of a tourist-friendly fairground— hula hooping dancers, face painters, an ensemble of drummers, T-shirt artists and a roped off area for kids' activities during Friday's "Parents for Occupy Wall Street" event. The park itself has become a make-shift village with impromptu tarp tents, snack tables and flier distributors. A group called ThePeopleStaged hosted an "open-mic without the mic" area where performers could air their grievances in 5-minute sets. Tourists and protesters alike gathered at Zuccotti Park’s iconic sculpture, ironically named Joie de Vivre, to snap photographs in front of signs reading: "Give Us Back Our Jobs Today" and "We Are The 99%."

Although many tourists at Zuccotti Park discover the Occupy hub by chance, some visitors in the park have come to New York specifically to get involved in the cause. One such protester, Ms. Hotge from Delaware, said "I saw it on the news, and I knew this is where I needed to be." Her entire trip was dedicated to wielding signs and speaking to passersby about unemployment in America. Another visitor from Philadelphia said that he'd come to Occupy Wall Street in hopes of raising money for the hungry by passing out "Mean People Suck" stickers for donations."We need to get more happiness in our lives," he said, "Don't wait on the government. They're not going to give it to you."

Now we want to hear from you. Would you travel over state lines to join a cause? Organize a sit-in? Sleep in a park? Vote in our poll or tell us your thoughts in the comments below.