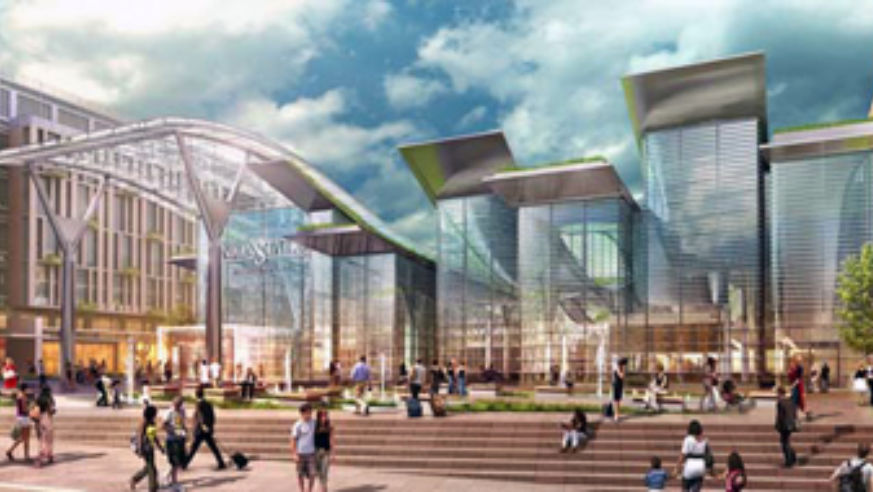 Courtesy Amtrak
The proposed redevelopment of the back of Union Station in Washington, D.C.

One of most iconic sights in Washington, D.C., is Union Station. Rebuilt in 1988, the Beaux Arts-building has become a favorite rest stop because of the prettily decorated vaulting roof of its main hall and the spacious food court on the basement level.

But Union Station has also become the second-busiest Amtrak station in the country, after New York City's Penn Station. Growth has been rapid, with more people taking the train between DC and New York than taking the plane -- the statistical reverse of a dozen years ago.

Amtrak believes the station needs to expand to cope with demand.

Surprisingly, Amtrak has put forward a plan for renovating the building that will cost $7 billion. Behind the historic hall, which would stay as it is as a "front door" to the station, Amtrak would build a glass-enclosed structure, replace the current parking garage, and double the number of trains the station can handle over the next 20 years.

Slate magazine has pointed out that the project is "insanely" expensive. The $7 billion pricetag is a lot more than similar projects elsewhere have cost, such as the roughly $1.2 billion the U.K. spent to renovate its St. Pancras rail station to handle Eurostar trains to Paris.

That said, images of the planned makeover are pretty.

One of the biggest changes would be to copy Europe's style of having passengers board trains from underneath a glass roof instead of in a dark tunnel.

What do you think of the proposed renovation? SHARE YOUR OPINION IN THE COMMENTS.

Is High-Speed Train Travel the Way of the Future? The Guys of Mad Men Think So! (19 comments)