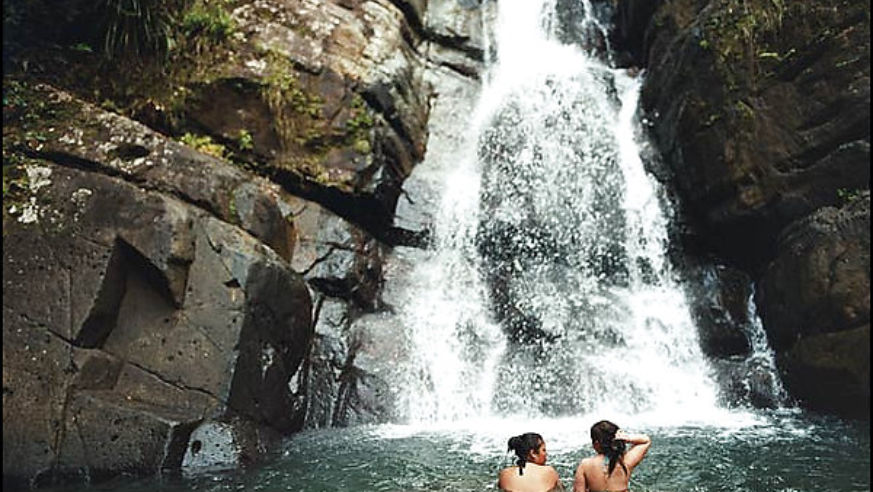 There's a lot more to Puerto Rico than San Juan—including a spectacular rain forest, scruffy beach towns, and locals who really know how to roast a pig.

DAY 1
From the San Juan airport, my friend Josh and I hit the ground running. We'd normally rent a convertible no matter what the weather was like, but with blue skies and an 80-degree day there's no question--the ragtop PT Cruiser is ideal.

Puerto Rico has been a U.S. territory since 1917, but the 51st state it is not: The culture is Latin and the language is Spanish. Even the automated tollbooth on Highway 3 blurts out "Gracias!" after we toss in a few coins.

We're headed to El Yunque National Forest, a 28,000-acre tropical rain forest that's home to more than 200 species of trees. About four miles after the town of Río Grande, we turn south on tiny Route 191, and our view morphs from large roadside restaurants to corner stores, then to fields fringed by palms and bamboo. El Yunque is in the Luquillo Mountains, and as we drive up the two-lane road, the air grows cool and damp. At El Portal Rain Forest Center, we pick up trail maps and then continue our drive to the Mount Britton Lookout Tower trailhead--the start of an easy half-mile hike, most of which is paved.

At the top, Josh and I climb the steps of the lookout tower, a 30-foot-tall stone structure that resembles a chess rook. We meet a pair of honeymooners from Kansas City and enjoy sweeping views of the cloud forest canopy. It's peaceful, but we're anxious to reach the peak of El Yunque, so we start up the trail that leads to the summit.

Josh, a photographer, is dying to get shots of the scenery, which looks as if it belongs inKing Kong: Giant tree ferns line the path, and in the distance jagged green peaks sit engulfed by a thick, swirling fog. There's another hour before the park closes, so after completing our first trek of the day, we drive to the Palo Colorado Visitor Center parking lot. We hike hurriedly to the main attraction, La Mina Falls--a 35-foot-tall waterfall. Swimming in the natural pool is against the rules, but many people are doing it anyway.

Josh and I hotfoot it back to the car. We have a 45-mile drive to Yabucoa, and we're starving from our long day of hiking. But at the family-runParador Palmas de Lucía, we hear some bad news. "Can you recommend any restaurants in town?" I ask Anna, the receptionist. "At this time of night?" she says. It's 7:15 p.m., and apparently most of the restaurants in Yabucoa close by 6 p.m. Fortunately, Parador Palmas de Lucía has a restaurant, so Josh and I toast our day with Medalla Light beer, dine on skirt steaks and stuffed plantain fritters, and retire to our room with a view of the sea.

DAY 2
There's not much to do in Yabucoa, so we get directions from the receptionist and drive off. It'll be the first of many times we're told to make a left when we really should be going right, but the detour takes us past a roadside fruit stand where we buy bananas, baby pineapple, and juicy yellow mangoes for breakfast. Realizing our miscue, we turn and make a beeline for La Ruta Panoáámica, a scenic stretch of winding one-lane roads that cut through the center of the island.

Soon we reach theSantuario Diocesano Virgen del Carmen, a Catholic church and holy site (a woman who is locally revered once lived and worshipped there). There's a grotto, too, and we're told by the bookstore's cashier that the spring water cures cancer and other illnesses. Curious, we walk down a series of steps to find an elderly woman whose adult son is splashing water on her eyes. With our rudimentary Spanish, we learn that she has cataracts. We're all for divine intervention, but our focus soon turns to lunch.

As we roll into Guavate, it's easy to see why the small mountain town is known for its roast pig. The main drag is lined with restaurants proudly displaying pigs roasting on spits. We chooseEl Rancho Original, an open-air, cafeteria-style restaurant that roasts at least two pigs a day. We order plates of the house specialty, rice and beans, and fried plantains, then grab a seat at a shady picnic table on the porch.

It's 50 miles to Ponce, so after lunch we get on fast-moving Highway 52. Our first stop in Ponce, a bustling city, is thePonce Museum of Art. With more than 3,000 pieces, including an important collection of Pre-Raphaelite works, the museum is a refreshing surprise, literally: The air-conditioning is as enjoyable as what's hanging on the walls.

Later that day we check into theHotel Meliá, a 73-room inn in the heart of the city's historic zone; our room has a balcony overlooking the main plaza. For dinner, the receptionist recommendsPito's Seafood, about four miles southwest. It's a romantic spot right on the water, and as we dine on fresh cobia, we can't help but lament the absence of our significant others.

Josh and I skip a sit-down dessert in favor ofKing's Cream, a popular ice-cream shop located on the ground floor of our hotel. At 9:30 p.m., the line is out the door. We eventually order cones ofguanábana (soursop) and stroll around Las Delicias Plaza.

DAY 3
Josh has a real sweet tooth, so when I tell him that we're going to Ricomini Bakery for breakfast, he's delighted. We've been tipped off about the brazo gitano--sponge cake rolled with fruit and cheese and then dusted with powdered sugar. It's traditionally a special-occasion dessert, but it sure goes well with morning coffee.

The bakery is in Mayagüez, an industrial city on the west coast, and when we finally get a taste of the guava-filled cake, we agree that all the wrong turns were worth it. We're tempted to see what else is nearby, but the laid-back surf town of Rincón is just 15 miles northwest.

Lined with towering palms, the winding Route 413--known locally as the Road to Happiness--allows us our first glimpse of the Atlantic. We stop right away atRincón Surf & Board, a surf school and hotel that also rents surfboards. Cobby, who moved from San Diego to Rinóón to become a surf instructor, helps us rent nine-foot longboards and offers to escort us to Maria's Beach, one of nearly a dozen local breaks, which he swears is "going off."

Josh and I stick our boards nose down in the backseat and follow Cobby. The waves are chest high, perfect for us East Coasters. By the time we dry off, it's happy hour at theCalypso Cafe, an outdoor bar steps from the beach. We grab a cool rum punch each and watch the sun dip into the ocean.

AtThe Tapas Bar at Casa Isleña, we eat the best food of the trip so far: small plates, starting at $3, of dishes such as seared yellowfin tuna, empanadas stuffed with beef and olives, and skirt steak marinated in ginger, garlic, and soy.

We have a reservation for tonight atBeside the Pointe, a guesthouse where the beachfront location makes up for the below-average rooms. It has one of the liveliest bars in Rincón, where we drink one too many Heinekens on the deck.

DAY 4
Nearly everyone we met the night before raved about breakfast at La Rosa Inglesa. Opened in 2006, the hilltop B&B is run by Ruth and Jethro Wickenden Rivera, a cheery couple who met in Britain and moved to Rincón. They constructed the building from the ground up, and, says our waitress, "have been serving the best breakfast in town ever since." After trying the huevos rancheros and limeade, we couldn't agree more.

We're used to getting lost by now, and we take some time to findRío Camuy Cave Park, home to one of the world's largest cave systems. The guide's humor feels canned, but once inside the main cave, we pay little attention. The place ishuge. My childhood trip to Virginia's Luray Caverns was nothing like this. The dome is 170 feet high, and there's a giant stalagmite directly below that's 30 feet in diameter. Each step is more eye-popping than the last.

We drive north to the coastal city of Arecibo. Ice-cream trucks and food vans line the road nearArecibo Lighthouse & Historical Park, and dozens of cars are parked at all angles. But where is everybody? After climbing the steps of Los Morrillos Lighthouse, we're still baffled--until we spot La Posa, a packed, crescent-shaped beach. When we go down for a closer look, we see a massive tidal pool. It's jammed with kids and other shallow-water swimmers; Josh and I are convinced that we're the only tourists.

It's our last chance for a swim before our drive to San Juan, so we dash for the water. A little while later we visit a food truck formofongo al ajillo--made with mashed plantains and garlicky shrimp--then drive east on scenic Route 681. The ocean-hugging road doesn't last as long as we'd like it to, but neither did our time in Puerto Rico.

Finding Your Way
To get a copy of Puerto Rico's tourist mag, Qué Pasa!, in advance, contact Puerto Rico Tourism Co. (800/866-7827, gotopuertorico.com). Also, a GPS navigation system like the Garmin StreetPilot will come in handy. As for your rental car, stick with an economy or compact, especially if you're driving along La Ruta Panorámica. The one-lane roads can be fairly difficult for larger vehicles.