Q&A: An around-the-world trip, minus the plane

Writer Seth Stevenson's new book Grounded recounts a journey around the world with just one catch—no plane travel. Stevenson and his girlfriend hopped aboard cargo freighters, ferries, rickshaws, and double-decker buses to get around, starting in D.C. and finally ending up in L.A. after crossing two oceans. We picked his brain for some of his best travel tips.

Q: What made you come up with this idea, to travel around the world without getting on a plane?

A: I was getting a little restless in my day-to-day life and was craving an adventure and a challenge. I also despise flying—the security lines, the cramped seats, the dry, recycled air. Making it all the way around the globe without the help of airplanes felt like a finite challenge that might be difficult but doable. And now I feel a sense of accomplishment.

Q: Of all the transportation modes you used (boat, car, train), did you have a favorite?

A: There is nothing like being on a ship in open ocean. There's something incredibly calming in the act of looking at a starry sky or an empty horizon as you hear only waves slapping against the ship's hull. Cargo freighters, in particular, are an amazing experience. You can eat your meals with the crew and hang out with the officers on the navigation bridge.

Q: What surprised you most about the trip?

A: Once you become accustomed to living out of a backpack, it's amazing how little you miss the possessions you left back home. We'd put some things in storage, and at one point I realized I wouldn't care one bit if all those objects burnt to ash and blew away.

Also, before you go: You might want to have a game plan—or at least be emotionally prepared—for dealing with Asian squat toilets.

Q: You traveled with your girlfriend. What's some advice for couples who travel together?

A: When traveling with someone you love, be positive it's someone you want to spend a lot of time with—like, 54 straight hours in the cabin of a Russian train. Difficult situations will always arise as plans fall apart, or ships are delayed, or visas don't come through. You need to support each other, lift each other's spirits in glum moments, and be willing to compromise.

Q: What's a story from this trip that you'll be telling for ages to come?

A: Our entire quest to make it around the globe without using airplanes was put in jeopardy in Singapore, when a cargo freighter refused to take us aboard at the last minute. We frantically searched around the Singapore docks—even sneaking into private yacht clubs—desperate to find another ship headed toward Australia. I'd just about given up hope when we spotted a cruise ship in the harbor. I ended up sprinting down its gangplank with no luggage and only the clothes I was wearing, and jumping aboard just seconds before the ship pulled away from the pier. My girlfriend didn't make it aboard the ship in time.

Q: What did traveling the "old-fashioned" way teach you about the places you visited?

A: Staying on the ground gives you a much better sense of the earth's size. It turns out we live much closer together than we sometimes imagine. For instance, the modern traveler can get overland from London to Beijing in a little more than a week. In the past, Londoners might have thought that China was a different planet. But sitting in a train car and watching Europe melt into Asia, you realize the earth is actually rather small...and thus fragile. And precious.

World-famous icons like the Eiffel Tower and Rio's Christ the Redeemer statue pose a true challenge for travelers, who often come home with the same images taken countless times over. But that wasn't the case for myBT member awc007, who shot this spectacular photo of Easter Island from a different perspective&mdash;the moai's-eye view. Kudos to all the readers whose fresh takes made it into our slide show; their 19 images will inspire you to rethink classic landmarks and try out new photo techniques. See our slide show. MORE READER SLIDE SHOWS Doorways | Mexico | Reflections NOW IN SEARCH OF... We're now collecting your photos of Spain and your compelling portraits of people around the globe. Upload them through myBudgetTravel, tag them, and check back in the coming weeks for a slide show of the best submissions. PHOTOGRAPHY TIPS How to Take Picture-perfect Photos

Italy and France are Europe's darlings, so Spain doesn't always get the coverage it deserves. We've picked 18 fantastic reader photos that do justice to the country's cities and varied landscapes, from rolling olive groves to palm-fringed beaches. See the slide show! MORE READER SLIDE SHOWS France | Italy | Ireland STILL IN SEARCH OF... We're now collecting your compelling portraits of locals around the globe. Upload the photos through myBudgetTravel, tag them, and check back in the coming weeks for a slide show of the best submissions.

We dug through our files to find photos&mdash;from readers and pros&mdash;that are so spectacular they're bound to get you dreaming and planning a new adventure. See the slide show. 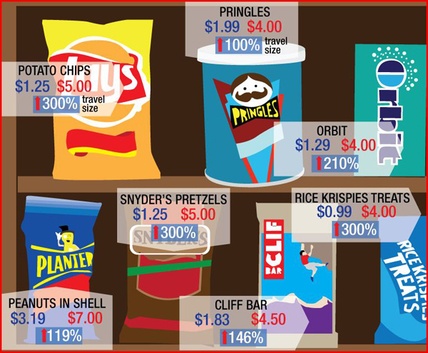 Minibar madness: A snack would be nice, but a 300 percent markup?

Just how much extra do you pay for the convenience of drinks and snacks in a hotel minibar? A neat new infographic from Mint.com shows you how much, using the minibar prices in rooms at The Standard NYC compared to what someone would pay for the same items in a grocery store near the hotel. In many cases, hotel guests pay three times more for the minibar goods. See the screen grab (shown in this post). The supermarket prices are in white and the hotel minibar prices are in red. Goes without saying: You'll save quite a bit by keeping your hands off the minibar and taking a stroll to the grocery store. It's a good idea to get out of the hotel from time to time too.