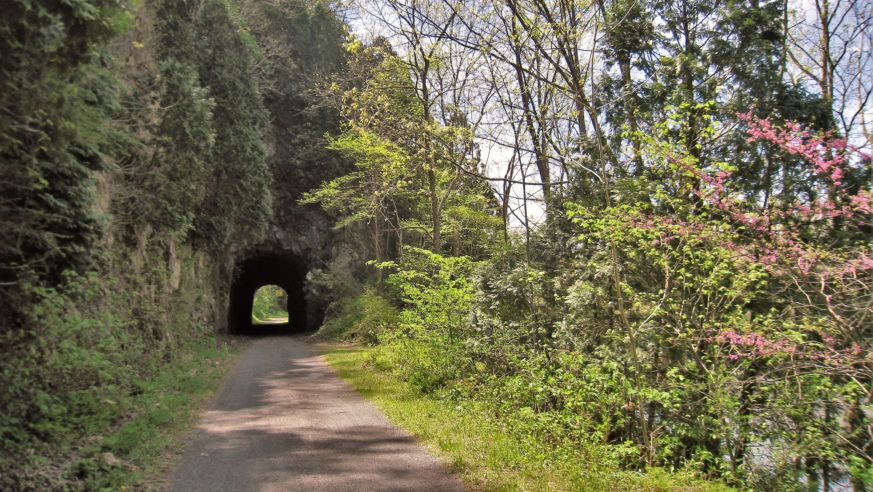 The New River Trail, in the Blue Ridge Mountains, in Virginia.

Get fit, learn some history, birdwatch, or simply commute along these peaceful, traffic-free former rail corridors.

Gone are the days when the U.S. was latticed with an extensive railroad network that connected communities big and small, and spurred their vitality. As air and car travel largely replaced the train, thousands of miles of tracks laid derelict and weed-choked. Yet, the demise of train travel brought an opportunity to convert some of these disused railroad corridors to scenic, multi-use paths (rails-trails) for human-powered activities, especially cycling. These paths not only reinvigorate communities and local businesses, but they also protect wetlands, forests, and other natural resources; and provide a safe path for commuting, fitness, communing with nature, and learning about the region’s culture and history. These six rails-trails are among the best in the U.S., each with a different personality, providing you with anything from a short jaunt to a long-distance adventure.

Just an hour or so from either Tampa or Orlando, the midpoint of this 46-mile paved trail, historic Floral City, is where the Seminole Tribe established a village in the early 1800s. This path, part of Florida's extensive state park system, feels worlds apart from the state’s theme and water parks. The more serene southern section wends to the wee community of Trilby, winding through Withlacoochee State Forest with its grand cypress trees dripping with epiphytes. Wildlife sightings, from gopher tortoises to opossums, are abundant along the entire route, and the foliage is diverse, including magnolia and sweet gum. Pack your rod and try angling for largemouth bass or bluegill in either the Withlacoochee River or Lake Townsen. (floridastateparks.org)

Wandering through the Black Hills from Deadwood to Edgemont, this 109-mile trail is named for the South Dakota governor who supported the conversion of the scenic railroad corridor to a rail-trail. Along the dirt and crushed stone path, cyclists find abandoned gold mines and other reminders of the area’s boom-and-bust period. With woodlands of spruce and ponderosa pines blanketing the slopes, and mountain meadows sprinkled with lavender, black-eyed Susans and other blooms, the 32-mile portion from Hill City to Dumont is especially picturesque. Stop in Rochford, a once-thriving mining town, where the Moonshine Gulch Saloon is a popular stop for beer and burgers. (gfpo.sd.gov/parks)

As you pedal past almost two dozen lakes on the 123-mile Paul Bunyan State Trail, Minnesota’s moniker, “Land of 10,000 Lakes,” seems apt. Running from Lake Bemidji State Park in Bemidji to Crow Wing State Park in Brainerd, a former railroad town, this paved rail-trail is named for the mythical lumberjack whose giant footprints and those of Babe, his blue ox, created Minnesota’s lakes. (Their statues are on display in Bemidji.) With various towns popping up every five to nine miles or so, you can ride almost anywhere and find a quirky vibe. The town of Nisswa holds turtle races each summer. (paulbunyantrail.com)

Huddled in southwest Virginia in the Blue Ridge Mountains, this almost 58-mile crushed stone rail-trail mostly follows the New River through a bucolic landscape of woodland, farm fields, narrow valleys, and rounded peaks. Many cyclists start mid-trail at the park’s headquarters in Foster Falls, a town that grew during the iron industry. (A 19th century iron furnace bears testament to that era.). Music buffs may, instead, want to start in Galax that’s nicknamed the “World Capital of Old Time Mountain Music.” Birdwatchers should keep their binoculars at the ready. Dozens of species, such as red-bellied woodpeckers and eastern kingbirds, have been spotted along the route. (dcr.virginia.gov/state-parks)

Paralleling the Roaring Fork River, Colorado’s longest rail-trail meanders from Aspen through Carbondale to Glenwood Springs, famed for its geothermal waters. The 42-mile-long, mostly paved stretch features the best of the state’s scenery: soaring peaks, stands of aspen, ranch lands, dry sagebrush, and conifer forests. You’ll have opportunities to spot deer, elk, and even black bear. Great blue herons, belted kingfishers and other birds are attracted to this corridor for its proximity to the river. Popular stops include the Woody Creek Tavern, the former hangout of journalist Hunter S. Thompson; Basalt that’s noted for its trout fishing; and the serene Rock Bottom Ranch, an ideal spot for picnicking and bird watching. (rfta.com/trail-information)

Taking its name from former Congressman Harold T. “Bizz” Johnson, who was instrumental in this rail-trail conversion, the 25-mile route from Mason Station near Westwood to Susanville is mostly dominated by the dramatic landscape of the Susan River Canyon. Cycling on packed gravel, you’ll crisscross the river numerous times on trestles and bridges, veering into evergreen-dense Lassen National Forest. In Susanville, stop at the circa 1927 railroad depot that serves as a visitor’s center with historical information on the railroad and the area’s logging industry. This is also the site of the annual Rails to Trails Festival where -- on October 12, 2019 -- you can enjoy the salsa competition and chili cook-off. (blm.gov/visit/bizz-johnson)