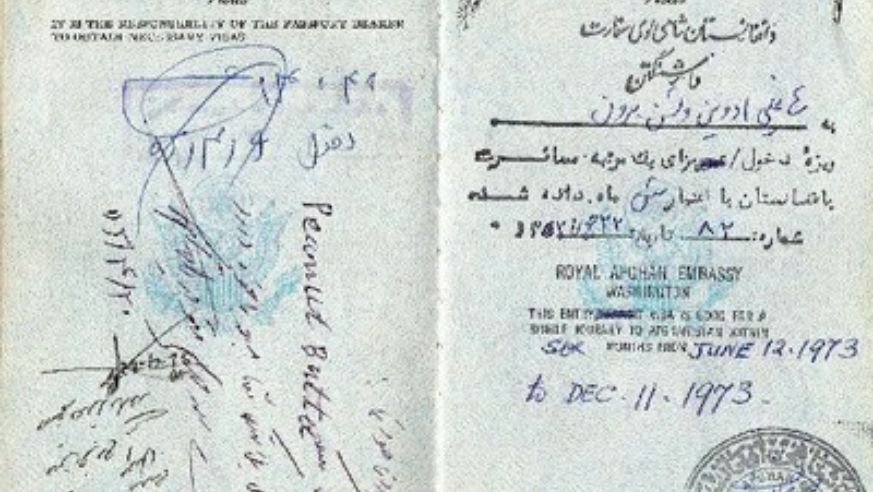 We loved the exotic passport stamps that readers of BudgetTravel.com recently shared.

Here's a slide show of the most fascinating ones, from Laos, Turkey, Libya, Sri Lanka, Burma, Nepal, Brazil, Suriname, Mozambique, and Bangladesh.

Since publishing the slide show, we've received a couple more rare ones:

Back in the 1970s, I made many trips to Afghanistan, where I was involved in helping the Afghan government start a new medical school in the city of Jalalabad. On one of these trips, I was traveling from Karachi, Pakistan, where I had picked up a case of Skippy peanut butter at the American Embassy commissary to take to my son who was working in a youth camp in France, where I was headed the next day. When the Afghan customs officer at Kabul Airport asked what was in the box, I told him it was food and took the cap off one of the jars so he could see and smell it. He was totally bewildered, and filled up this entire page in my passport giving me permission to import the stuff, so that when I departed the next day I would be permitted to take it out through Customs.—Edwin W. Brown, M.D., Indianapolis

When my husband and I traveled to Zimbabwe in 2005, we got this cool stamp. We were there on a hunting safari and I got to go to Victoria Falls too. The falls were so powerful and beautiful! At the time the country had it's share of troubles, and it's saddening to know that it has continued it's spiral downward. With the fastest growing inflation in the world and severe shortages of everything, the country is in great turmoil.—Wende Warren, Milwaukee [who has a blog].

Shown at left is a honorary stamp from Port Lockroy, British Antarctic Territory.You'll find the stories behind all of the stamps featured in the slide show here.

Update 11/28: It’s not too late, you can still send us your coolest passport stamps