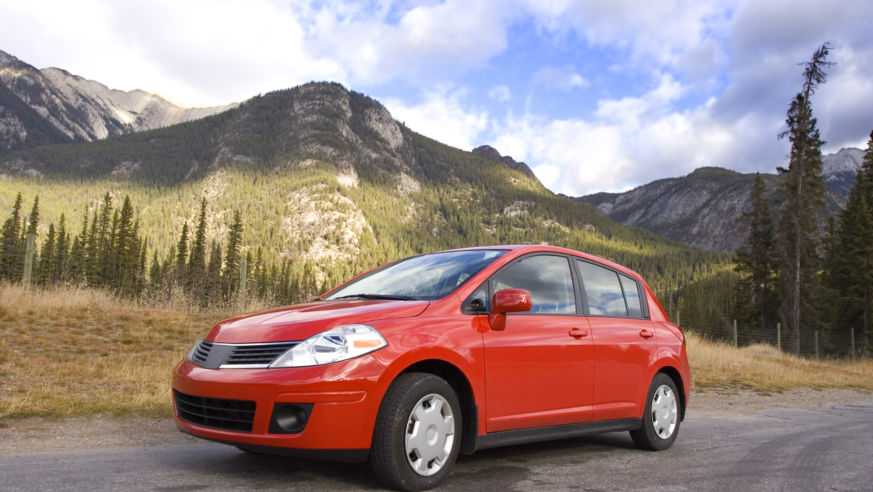 Confused by the car rental process? Worried you're going to spend too much on features you don't need, gas, and insurance? So were we! We turned to our finance whiz for the latest intel on nabbing a great rental car and still having money left to enjoy your vacation.

Despite rising gas prices, 80 percent of U.S. families are planning a road trip this summer, up 10 percent from last year, a recent AAA survey found. But for many people, taking that dream road trip requires renting a car, which can be a stressful, confusing, and expensive process.

The rental car industry is notorious for its array of sometimes confusing options for customers. Last year one in five car renters reported problems with their service, according to J.D. Power’s annual North America Rental Car Satisfaction Study.

For consumers, the rental car counter can be treacherous. “Rental car agents are paid on commission, so they’re incentivized to try to upsell you for everything,” says Jonathan Weinberg, creator of AutoSlash.com, a service that tracks rental price changes to help get consumers the best deals. “If you ask whether you need something, they’re going to say yes.”

Also, since many rental car companies are good at burying fees and surcharges in long rental agreements—you know, the paperwork you barely glance at before signing—the onus is on you to thoroughly research your options. Indeed, “when renting a car, it’s a ‘buyer beware’ transaction,” says Neil Abrams, president of the Abrams Consulting Group, which tracks the rental car industry.

Follow these steps to drive down the costs on your next rental car and enjoy a cheaper, happier road trip.

Bring your own transponder

Going through a toll can bring unexpected fees when you use the rental car company’s transponder (e.g., E-ZPass, SunPass). “It varies by company, but usually you’re going to get charged a convenience fee of $5 a day starting on the first day that you use it,” says Weinberg. In other words, if you’re traveling for a week and go through a toll on the first day, you’ll get charged a $35 fee for the whole week regardless of whether you go through more tolls.

Thus, you’ll want to use your own transponder on the trip. If you need to buy one, you can do so online or at some convenience stores like Publix, CVS or Walgreens.

Don’t prepay for the car

Many rental car companies give you the option to prepay for the rental in exchange for a reduced price, but there are some major caveats. For starters, you’re locking yourself into that price point, but rates often drop as the pickup date approaches—potentially below the prepay rate that you accepted earlier. If that happens and you try to re-book for the lower rate, you’ll get slapped with a cancellation fee of about $50, which could effectively negate the amount of money you’d save by rebooking.

The good news is you can still reserve a vehicle without paying for it upfront; then, if the rate drops, you simply cancel and rebook. “Renting a car is not like booking a seat on a flight, where you’re stuck with the reservation,” says Mark Mannell, chief executive of CarRentalSavers.com. “There’s no penalty for cancelling and rebooking.”

When you pick up the car, you’re given the option to pay ahead of time for the car company to refill the gas tank when you return the vehicle. However, you’ll save money by refilling the tank yourself for a couple reasons. First, “anything that’s left in the fuel tank that you bought is non-refundable if you opted to prepay for gas,” says Abrams. Also, when you prepay for gas, the rental company charges you the “local market rate” for the fuel but it’s often more expensive than gas stations that are just a few miles away. “Rental car companies aren’t gas stations,” says Abrams. “They provide fuel as an accommodation, and they charge a premium for it.”

READ: "25 Most Beautiful Cities in America"

To maximize your savings, use the free GasBuddy app (available on iPhone and Android) to find the cheapest station near the airport. When you return the car, take a photo of the fuel gauge in case the rental car company tries to charge you refueling fee later, advises Abrams.

Many companies will provide an inspection report when you pick up the car, but you should still take photos of any pre-existing damage. (Many camera phones also let you time stamp pictures.) If there is pre-existing damage, make sure the rental agent records it in the agreement. Also, don’t forget to take photos when you return the car, says Mannell.

Insurance through the rental car company can cost up to $50 a day, depending on the plan you select, but you may already be covered through your existing car insurance, homeowner’s insurance, or credit card. Weinberg says most auto insurance policies include coverage for rental cars. Still, it’s good to check with your insurance company or credit card issuer ahead of time to make sure you’re covered. (NerdWallet.com, a credit card comparison website, has compiled a list of which cards include rental car insurance.)

Look into renting from an off-airport location

Airports often charge rental car companies airport concession fees, which the rental companies then pass on to customers. As a result, daily rates at off-airport stations can be up to $20 or $30 cheaper per day, so it’s wise to survey your options. Just make sure you factor in the cost of a taxi or Uber ride to the off-site location when comparing prices. After all, “if you’ll wind up paying $50 for a taxi, it may not be worth it,” says Abrams.

Avis, Hertz, and Enterprise are the three largest rental car companies, but there are a number of smaller agencies that offer competitive rates, such as Fox Rent a Car and Advantage. But you may have to make some concessions if you rent from one of these companies. “You’re not usually going to get newer car models at discount agencies,” says Weinberg. Also, a lot of independent agencies don’t have airport locations.

One car rental agency you may want to research carefully is Payless. The Better Business Bureau recently issued a nationwide warning to consumers after having received more than 800 complaints about Payless in the past three years. (The BBB has given the company an F rating.)

READ: Read This Before You Book a Vacation Rental

Rental car companies offer discounts to members of frequent flier programs and credit card holders; AAA, Costco, and BJ’s also offer members deals on rental cars. These discounts can often be combined with discount codes from the rental car company. For example, a full-size car rental from Hertz at Ronald Reagan National Airport was $281.85 in a recent search, but plugging in a AAA member discount code and a Hertz discount code dropped the rate to $201.90.