Our (endless!) sunset series has been eliciting tons of photos through myBudgetTravel, our social media site. So we put together the best of the best. Among the 17 photos we selected, check out Balinese lovers, a tall-masted sailing ship off of Key West, and a fiery French Polynesian seascape in Bora-Bora. Keep the photos coming, and tag them sunsets. See our slide show!

• Recent submissions suggest we should start a rainbow series. Upload any images you have through myBudgetTravel, tag them rainbows, and we'll start featuring the series in coming weeks.

We've been asking top guidebook writers to recommend alternatives to well known tourist attractions. Today, we talk with Stephen Keeling, author of the first-edition of The Rough Guide to Puerto Rico. We asked him: If you had to recommend an alternative destination to San Juan, Puerto Rico, where would you recommend? The island of Culebra, off the coast of Puerto Rico, is a stunningly gorgeous alternative to well-trafficked San Juan, where most tourists go. The island is a short plane or ferry ride from the main island of Puerto Rico. Unlike much of the Caribbean, Culebra remains low-key and unspoiled by resorts. Culebra's Playa Flamenco is one of the world's best beaches, but there are others, like Playa Soni, that are almost always deserted and just as beautiful. The bioluminescent bay in Vieques also off the coast of Puerto Rico is another reason to move past the main island. This mind-blowing phenomenon is best experienced during a nocturnal swim, with water glowing in the dark and dripping from your fingers like sparkling gems&mdash;quite amazing and totally underrated outside Puerto Rico. Think we've slighted San Juan? Please don't! San Juan is a terrific destination, both Budget Travel and The Rough Guides agree. We're just pointing out alternatives for some travelers. If you think San Juan deserves more credit, let us know! Each month, we pick one of our favorite cities and ask locals to show us around their all-time favorite spots. So, residents of Puerto Rico's coastal capital, we need your help! Fill out this online form and then watch for your town in an upcoming issue of Budget Travel. MORE TRAVEL ALTERNATIVES Better than Ha Long Bay, Vietnam? Better than the Inca Trail? Better than the Eiffel Tower? Better than Stonehenge? Better than Buckingham Palace? 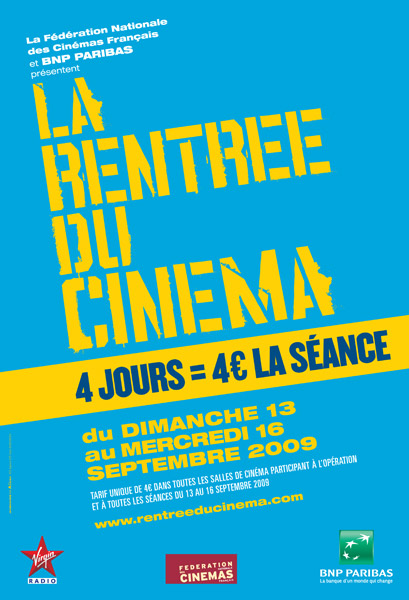 In Paris: A four-day festival of affordable film

Film lovers in Paris will be happy to know that the city is putting its seats on sale for four days in mid-September. The Rentr&eacute;e du Cin&eacute;ma festival runs in theaters across town from September 13&ndash;16 and features tickets for only &euro;4 ($5.75). That's more than half the price of a regular movie ticket. So take this as your opportunity to see Julie &amp; Julia in Child's original Paris setting, or to challenge your French comprehension with one of the local favorites, like the dark and heavy prison drama Un Proph&egrave;te (the prophet). Bon film!

They say an apple a day keeps the doctor away. You could probably get your apple fix for the entire year at the North Carolina Apple Festival, held in Hendersonville, N.C., this weekend. The 63rd annual festival begins on Friday and lasts through Labor Day, when there's a huge King Apple Parade. The backbone of the festival is the free Street Fair, which takes over eight blocks of Main Street, with 250 vendors selling arts and crafts wares. There's also live entertainment, like bluegrass music. Henderson County, N.C. is the seventh-largest apple-producing county in the U.S., with about $22 million in income a year. The state's apples are mostly red and golden delicious, Rome beauty, and gala. At the festival, there will be 14 local apple growers present, selling goodies like apple ice cream, apple freezes, and fried apple pie (yum). Hendersonville is about two hours west of Charlotte, N.C. Festival organizers expect more than 225,000 people to attend. How do you like them apples? Go to ncapplefestival.org for a full schedule and parking information.

Ever wondered what it would be like to live in Paris? Immersing yourself in an expat blog is one of the best ways to find out. It seems that every year a fresh crop of bloggers has arrived on the electronic scene to share the ecstasies and agonies of life abroad. Because their lives often include a lot of food and fun, expat blogs are also a great way to learn about the local happenings. I've selected my current favorites (not including my own), and invite you to add your personal picks in the comments. Petite Anglaise The mother of all expat blogs—this is the one that got Catherine Sanderson fired when her employer discovered it online. Sanderson sued for wrongful termination, won her case and a year's salary, and snagged a two book deal from Penguin in the process. The second of these, French Kissing, was just published last week and is a saucy fictional account (or so she claims) about online dating in Paris. SELECTED POSTS: Suspendered and Uptown Girl. Kung Fu Dana From pig slaughter to hip hop opera—musician Dana Boulé has recorded some of the most absurd and hilarious expat moments that I've ever had the pleasure of reading. Follow along as she discovers the city, masters the language and takes the French music scene by storm. And be sure to check out her hilarious video French Boy. SELECTED POSTS: So Mad I Could Spit (Shirley and Nancy Part 1) and Ce Que Tu Dis: Baudelaire. La Coquette Elisabeth Fourmont has been writing this fashionable Paris blog for more than five years. "Don't hate me because I live in Paris," she pleads, while pointing out some of the city's most stylish addresses. Great writing and sharp humor give La Coquette an edge over her fashion blog rivals. SELECTED POSTS: I'm okay, Eurotrash and (not) Watching Sunsets. Maîtresse Bring your high brow over to this literary blog, which promises that "reading is sexier in Paris." Lauren Elkin keeps her fellow bookworms abreast of the literary happenings in Paris, while still finding time for the occasional rant. SELECTED POSTS: This Star Called Paris and Aux Armes, Citoyens! Just Another American in Paris Churning out a new post nearly every day, Anne is clearly not just another American in Paris. Her blog captures snippets of daily life and offers wry advice to visitors (no white athletic shoes!). SELECTED POSTS: La Rentrée and 25 Things I Love About Paris. Foreign Parts J.A. Getzlaff is an American journalist who shares the loves (à aimer) and hates (à détester) of her adopted city. Count on her for more analysis and less sugar coating than you'll find in other corners of the blogosphere. SELECTED POSTS: Getting Sick, Part One and Menswear. God, I Love Paris A relative newcomer to the Paris blogosphere, this young Francophile is nothing if not prolific. She's already written 318 posts this year, and it's only August. Oldskool Paris bloggers should really be watching their backs… SELECTED POSTS: The Little Things I Love and Past Present. Paris Parfait Another prolific blogger (1,823 posts since January 2006!), Tara Bradford's posts are always illustrated with gorgeous photos. Her subject matter is varied—it's the Obama health care debate on one day and a new Paris shop opening on the next! SELECTED POSTS: La Vie Parisienne and In Search of the Unusual. Polly-Vous Français? Talk about obsessed, the author of this blog no longer lives in France and she's still posting (knowledgably) about Paris almost every day. Her archives remain a great source of insight and inspiration. SELECTED POSTS: French Flirting and Madame Tabac. Paris Wise Finally, something written by a man! A man who loves decorative arts, sure, but a man nonetheless. Drawing on his training in architecture, art history and gourmet cooking, newcomer Christopher promises to bring a sophisticated touch to the Paris blogosphere. SELECTED POSTS: Chicken or beef? and How to Find a Good Boulangerie in Paris. BONUS BLOG! Ask A Frenchman! As the name implies, this blogger is a native and not an expat, but his "Dear Abby" style blog appeals to the same audience. His responses to reader inquiries never fail to crack me up. SELECTED POSTS: Are French men totally obsessed with sex? and Are French women really that insecure? PREVIOUSLY 10 Top Paris Food Blogs