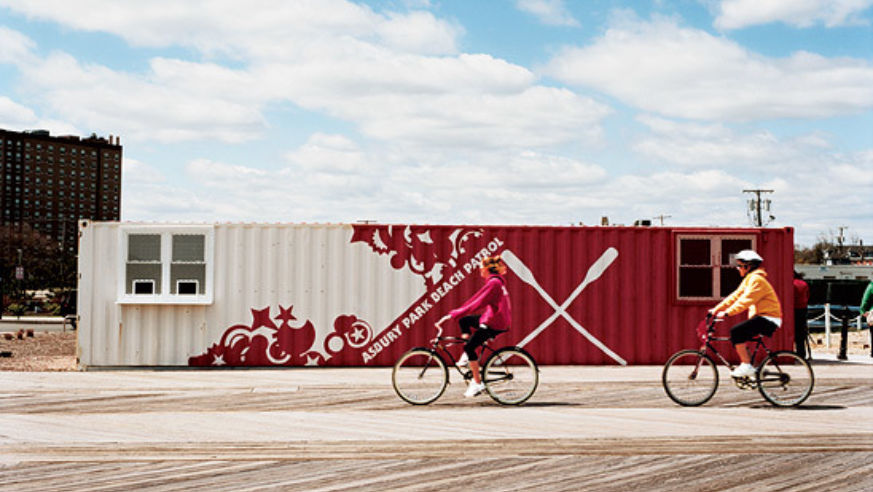 Everyone loves to poke fun at the Jersey coast, but the fact is, the joke's on them. Brian Hiatt explores three legendary&mdash;and recently spruced-up&mdash;shore towns that still promise the classic American summer.

Until late last year, it was hard to imagine how New Jersey's image could get much worse. Bon Jovi, 148 miles of turnpike, The Sopranos, Real Housewives—it all added up to a big-haired, acid-washed caricature of the state. Those of us from Jersey could do little more than shrug and laugh. I mean, Whaddayagonnado? But then, in December, MTV unleashed Jersey Shore.

The wildly popular reality show, whose second season debuts this month, follows the summer-rental adventures of eight overtanned, overmuscled, undereducated young people in the shore town of Seaside Heights. No matter that "Snooki," "The Situation," and the rest of the cast mostly hail from places like Staten Island and The Bronx: It seemed that the trashiest place on earth had found the mascots it deserved.

For someone who actually grew up on the shore, MTV's live-action cartoon was one insult too many. My fondest memories are dusted with sand and clotted with saltwater taffy. And while Bruce Springsteen's "carnival life on the water" might have been an overly romantic depiction even in the best of times, it was still my romance. I'll admit that the Jersey burbs can verge on the generic, but the 130 miles of beaches and towns along the coast are all color, from the wilderness of Sandy Hook to bed-and-breakfast-studded Cape May. And as I've been hearing, two of the shore's best-known towns—the once-glittering resorts of Asbury Park and Long Branch, both in my native Monmouth County—are in the midst of unexpected revivals. So as any spurned local might, I grabbed my fiancée, Jen, hopped a ferry from Manhattan to Atlantic Highlands, near Sandy Hook, and set out on a journey to redeem my home state's battered reputation.

Of all the towns on the Jersey shore, Asbury Park is the most famous—and not necessarily for good reasons. Over the span of a few decades, the city transformed from flashy resort to gritty rock-music mecca to poster child for urban decay. Yet when Jen and I pull into town, it's as if history has somehow reversed itself.

Our first stop is Convention Hall, just off the boardwalk. The hulking beaux arts structure was built with Jazz Age exuberance in 1929 to house acts like Benny Goodman and the Marx Brothers. Terra-cotta sea horses and serpents swim over its brick-and-limestone façade, and a copper model boat sits at its peak, a memorial to a cruise ship that ran aground here in 1934. Just three years ago, the venue, which once hosted the Doors, Janis Joplin, and the Who, was visibly falling apart, rotting in the salt air after years of neglect. But today, thanks to extensive restoration, it gleams like new and draws a fresh crop of big names—from Jeff Beck to Tony Bennett—to its adjacent Paramount Theatre.

Over on the boardwalk, things are spiffed up and the same all at once. In a storefront, I spot the visage of Tillie, a leering, Alfred E. Neuman–like clown who is the closest thing Asbury has to a mascot; the character even inspired protests when a building with his image on it was torn down a few years ago. At the site of a once tragicomically decrepit Howard Johnson (TV host and chef Anthony Bourdain visited in 2005 and was afraid to order anything more elaborate than a grilled cheese), we duck into the bustling McLoone's Asbury Grille for a Bloody Mary before heading down the boardwalk to the Silver Ball Museum—home to 100 or so vintage pinball machines. Inside, it's a riot of bells and clanking metal, and we hand over $7.50 apiece for 30 minutes of unlimited play.

In some senses, the story of Asbury Park's revival can be told through the Hotel Tides, where we're staying the night. Tucked away on a residential street, the hotel is an unlikely labor of love, as I learn when I meet co-owner Martin Santomenno. A real estate investor who was once maître d' at the World Trade Center's Windows on the World, Santomenno, along with a few partners, converted a dowdy guesthouse into a modern 20-room boutique hotel. "It started as a minor renovation, then it turned into a minor rehab, and then a major rehab," he recalls with a laugh. An airy lobby now doubles as a gallery that showcases work by Asbury-based artists. The rooms are smartly designed, with iPod docks, ultra-high-thread-count Anichini sheets, and rain-forest showers with river-rock floors.

Santomenno began weekending in Asbury in 2001, a couple of years after a residential resurgence led largely by the gay and lesbian community. Attracted to Asbury by its cheap real estate, broad beach, and the 90-minute drive to New York City, these new residents bought big, run-down houses and restored them piece by piece. As the community grew, home owners lobbied for civic improvements and eventually opened businesses. Their vision of Asbury isn't just about tradition: Santomenno is far more excited about the time composer Philip Glass stopped by the hotel than when Springsteen's people scouted his house for a music video. "We consider ourselves a cultural center," he says. "People come to Asbury for the music, the art, and the food, not just for the beach. Right before last summer, 21 new businesses opened—we're keeping mom-and-pop stores alive."

If Hotel Tides is a look at Asbury's future, then Vini "Maddog" Lopez is a part of its past. The original drummer in Springsteen's E Street Band (E Street is an actual road in Belmar, just to the south), Lopez joins us for breakfast the next morning at Frank's, a 50-year-old diner on Asbury's Main Street that, in his words, "has good mud." Lopez, grizzled and friendly, holds tight to his history: He currently plays in Steel Mill Retro, a band that re-creates the long-lost songs of the late '60s, pre–E Street days. He happily shares stories of nights at long-vanished clubs like the Student Prince and the Upstage, but he's quick to dismiss Springsteen's more fanciful visions of the city, heard in songs about wooing girls under the boardwalk. "There were rats underneath there," Lopez says.

After saying our good-byes, Jen and I swing past Cookman Avenue, an up-and-coming stretch with an indie theater (think obscure and Swedish films) and some posh boutiques like Shelter Home, a home furnishings store co-owned by a textile designer who works on Broadway productions. From there, we turn our sights south. For 20 miles we bump through coastal towns like Belmar, Manasquan, and Point Pleasant, and then cut onto the Barnegat Peninsula, a spit of sand separating the Atlantic from Barnegat Bay, as we approach Seaside Heights, the now infamous home of Jersey Shore.

For months, I've been hearing people talk about Seaside Heights as if it's some anthropology experiment, a case study in bumping clubs and boardwalk fights. But when we pull into town, it's clear that stereotypes don't hold. Instead of alcohol-fueled chaos, we find an unpretentious, kid-friendly resort town full of little cottages crowded up to the coast.

It's not yet prime season, so things are pretty quiet. We pass the police station, where at least one Jersey Shore cast member was locked up, and cruise by Club Karma, now famous for cheap shots and dance music. Yet by the beach, it's as if the show never existed. A mini amusement park sits at either end of the mile-long boardwalk, and a Ferris wheel stands on a pier. Inside the 57-year-old Lucky Leo's Amusements, everything's familiar: the wooden skee ball lanes, the barker at the wheel of fortune, the paper tickets waiting to be traded for an endless selection of trinkets. The scene is timeless—a snapshot from the classic American summer—and it stands in contrast to our final destination, Long Branch.

In many ways, Long Branch is the original shore town. The city began as a fashionable destination in the 1860s—well before Asbury or Seaside—starting with a visit from Mary Todd Lincoln, wife of Honest Abe. Then, like many other towns, it settled into prolonged decay. The final blow came in 1987, when the amusement complex on its pier (including a haunted mansion I never mustered the courage to enter) burned to the ground. All that remained were a few sad little arcades, seedy strip clubs, and the occasional music venue.

That could've been it for Long Branch, but five years ago a local developer rebuilt the boardwalk and pier. Unlike the grassroots refurbishment of Asbury, the result here is a slick retail and residential complex called Pier Village, complete with upscale restaurants and bars, a bookstore, and a Gold's Gym (where we work out the next morning on treadmills facing the ocean). The Bungalow Hotel is one of the latest additions to Pier Village. The white-on-white rooms are hardly a bargain at $199, but given the fact that they could pass for ones at a $500-a-night Miami resort, they seem a worthy splurge, with South Beach–inspired faux fireplaces, faux-cowhide chairs, and Apple TV.

With all the driving that afternoon, Jen and I had skipped lunch, so we immediately walk to Avenue, a glass-and-steel oceanfront restaurant that attracts young, hip-for-Jersey patrons—and at the moment, too many of them. The place is packed for happy hour. Instead of waiting, we decide to retreat inland. A few blocks from the beach, the flash of Pier Village mellows, and old-school Italian restaurants and simple hot dog stands remain as bulwarks against the city's new image.

We opt for Tuzzio's, a squat brick-and-stucco establishment across from a dry cleaner. The crowd here (families of six and elderly couples) is anything but hip, and the same goes for the decor, highlighted by a stained-glass version of the restaurant's logo and gold-mirrored beer-company signs. But the leather booths are inviting, the vibe couldn't be warmer, and the food is a throwback: rich sausage and peppers in marinara sauce, and salad with special house dressing, a distinctly tangy blue-cheese vinaigrette. "If you don't like it," the grandmotherly waitress says with a smile, "I'll bring you something else."

Back at the boardwalk, we eventually return to Avenue, which has quieted down. We sit at the polished-steel bar, where I get a dirty martini and a few oversize shrimp from the raw bar—we did skip lunch, after all. Jazz remixes play from overhead speakers. I bite into a shrimp, sip my martini, and feel a pleasant sense of disorientation. This is definitely not Snooki's Jersey Shore. It's not Bruce's, or at least not the one he sings about. It's not really mine, either. But for the moment, I'll take it.