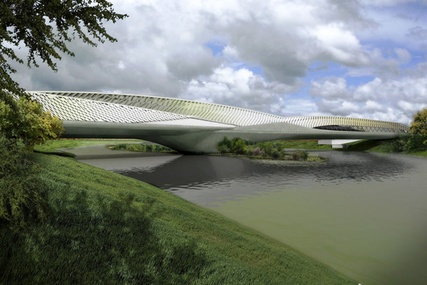 A few months ago we blogged about World Expo 2008, a three-month exhibition in Zaragoza, Spain, focused on the theme of "water and sustainable development." The Expo, billed as "The Greatest Water Festival on Earth," starts this Saturday and ends on September 14. I visited Zaragoza a few years back as I was passing by on the E-90/A-2 highway, and found the city utterly charming.

Britain’s newspaper The Independent recently produced a 15-minute video called 48 Hours in Zaragoza, which gives you a good sense of the city’s beauty, and its personality. Be forewarned, though, that the script has a few wince-able moments. At the Tryp Hotel near the Expo site, the host enthuses, “The beds have pillows big enough to eat you!” I thought the pillows looked pretty docile—but it's possible they were just biding their time. To skip ahead to a few of the highlights, drag the progress bar to the 2:30 mark and watch until about 7:00.

The World Expo’s official website says that the event will take place on a thousand square meters of exhibition space and christen three notable new buildings: the largest freshwater aquarium in Europe (5,000 specimens from major world river systems, including giant Nile crocodiles), the Water Tower, which takes its shape from that of a water droplet, and the Bridge Pavilion (above), a stunning, two-story span that drops pedestrians onto the main Expo site.

For more on the impressive buildings and exhibits, I found this video to be the most useful.

Zaragoza is about 250 kilometers (about 150 miles) from both Madrid and Barcelona, making it a relatively easy trip from Spain’s two largest cities. A new high-speed AVE train-link from Madrid reduces travel time between the cities to less than 1.5 hours. Train travel from Barcelona takes less than two hours. Eurail card holders with service in Spain earn 12 percent off of Expo entrance fees.

And Finally, a Few Odd Twists…

Expo Zaragoza has recently had its moments of sublime P.R. weirdness. If you have a few minutes to burn, check out Bob Dylan’s new recording of A Hard Rain’s Gonna Fall, which he’s donated to the Expo for promotional use. This noticeably more upbeat version of the original, dystopic recording ends with Dylan hoarsely (froggily?) endorsing clean water for the planet. Odd, and fun too.

More fun, still, is the Spanish-language, animated series starring Fluvi, the Expo’s super-earnest, water-droplet mascot. I don’t speak Spanish, but to me it looks like this sequence captures the heroic cartoon droplet as he squares off in an American-Idol-style rap contest with an insidious enemy of clean H20. Engrossing, funny—and a little strange. I couldn’t stop watching.

Madrid: Goya and Renaissance portraiture in the spotlight