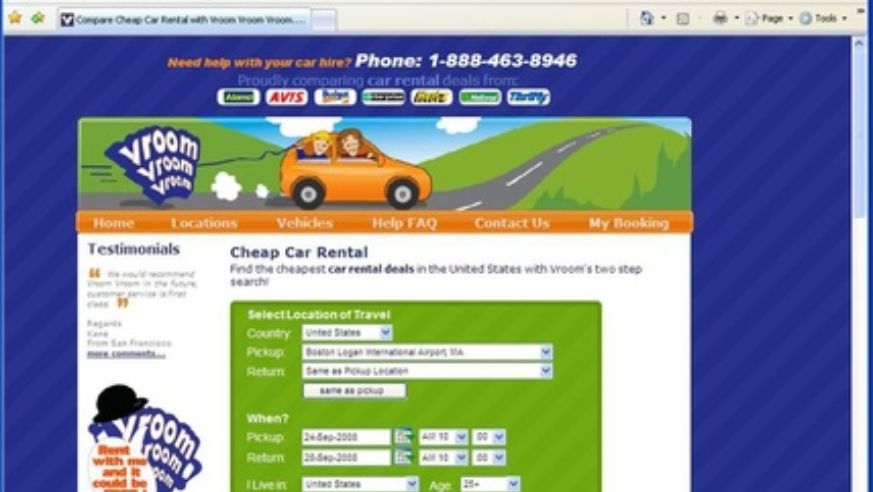 When it comes to booking a rental car without feeling guilty that you're hurting the environment, the Internet can be a source of frustration. The only major search engine to catalog every individual hybrid rental in the U.S., for example, is Kayak. Trouble is, there are only about 3,000 hybrid cars nationwide for Kayak to list, and most are in New York and California. What if you want to rent an ordinary car (instead of a hybrid) and still feel good about your environmental impact?

Enter Vroom Vroom Vroom, an oddly named car-rental and car-information website that officially debuted this morning. The site is similar to CheapTickets, Priceline, Expedia & Co., in that it makes it easy to book reservations from all the major rental car brands (Alamo, Budget, etc.) at about 2,000 locations in the U.S, with additional locations in Australia (where the site was founded), New Zealand, the U.K., and Canada.

What makes it special:Book any car rental—not just a hybrid—and Vroom Vroom Vroom will provide you with carbon offset credits for free.

Other perks: There are no cancellation fees, and the prices listed in the search results are total prices, including taxes and fees (including those pesky Airport Recovery Fees at airport rental car company locations).

Are the free carbon credits worthwhile?

We've expressed skepticism about some of these credits in the past. Yet this program seems promising. Vroom Vroom Vroom is partnering with CarbonNeutral, one of the top carbon offset and climate consulting businesses, because of its reputation for legitimacy, according to spokespeople. "CarbonNeutral has worked with over 200 carbon projects around the world and has played a role in establishing industry policies and protocols," says spokesperson Pamela Johnston. "All of its programs are reviewed by an Independent Advisory Group of climate change experts, a respected third party conducts an annual audit of carbon stocks and contracts and a full register of carbon transactions and contracts are published for review. CarbonNeutral projects include renewable energy, such as solar and hydro power, resource conservation, waste reduction, and forestry."

What else does the site offer?

On the more amusing side, Vroom Vroom Vroom has “Geek Travel Tips," which a press release accurately describes as "a list of 25 Web apps for road-trip planning including maps, travel search engines, resources for business travel, and tools for finding parking lots, radio stations, and the best gas prices." Here are some examples:

SpotScout—parking lot finder for NY, Boston, San Francisco (and expanding to other cities)

eRideShare—contains more than 20,000 total ride share listings throughout the United States and Canada; includes trips as short as running a single errand, to people looking for daily commuter car-poolers, as well as those looking for a cross-country companion. In addition, eRideShare maintains an extensive list of tips and tools for picking the right passenger to help minimize the chances of getting stuck with an undesirable companion.

GasBuddy—the famous website that compiles gas prices reported by email and text from drivers nationwide, making it possible for you to find the best deal.