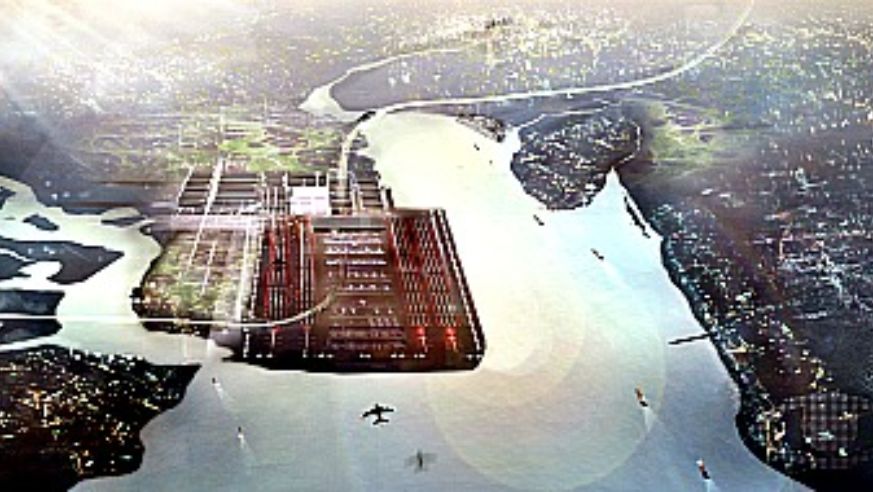 London's Heathrow Airport is the world's busiest international airport, but it's too full and it can't grow any further. Protests by local residents have prevented an additional runway and terminal from being built. Rival airport Gatwick faces a similar problem. So, government officials have turned their eye south to the idea of building a brand new airport where no local residents can possibly protest it—in the middle of the Thames Estuary.

Earlier this month, the plan for a new airport was unveiled to the public by famous British architect Norman Foster. The Thames Hub would be set on an island near the mouth of the Thames River. It would be connected to the city by a $10 billion "orbital shuttle train," says the Times of London. The airport could be partly financed by private investment or international sovereign wealth funds, claim officials.

This weekend, the Financial Times reported that the idea of building an alternative hub airport south of London has won support from key players: Chancellor George Osbourne (who oversees the British Treasury), the new Transport Secretary Justine Greening, and the prime minister's main policy advisor Steve Hilton. The mayor of London Boris Johnson has been advocating for a new airport since he released a report in January saying the city's economic future depends on such expansion.

Air passenger numbers are expected to double in the next 20 years, and British officials worry that airlines may re-route their flights to rival, larger airports, such as Schiphol in Amsterdam, Charles de Gaulle in Paris, Frankfurt am Main, and Dubai International. Unlike these airports, Heathrow has not been expanded since it was first built in 1946. Its two runways already operate at 98 percent of capacity on the typical day.

Britain isn't the first to consider moving its main transit hub to a larger airport. Moving a hub airport is something other cities, such as Milan, Hong Kong, Paris, and Tokyo, have done successfully.

Governments have talked of expanding London's airport capacity since the 1960s, though. The debate is likely to continue for another couple of years before a final decision. So travelers shouldn't expect relief any year soon.

What do you think about Heathrow? Does it deserve replacing?