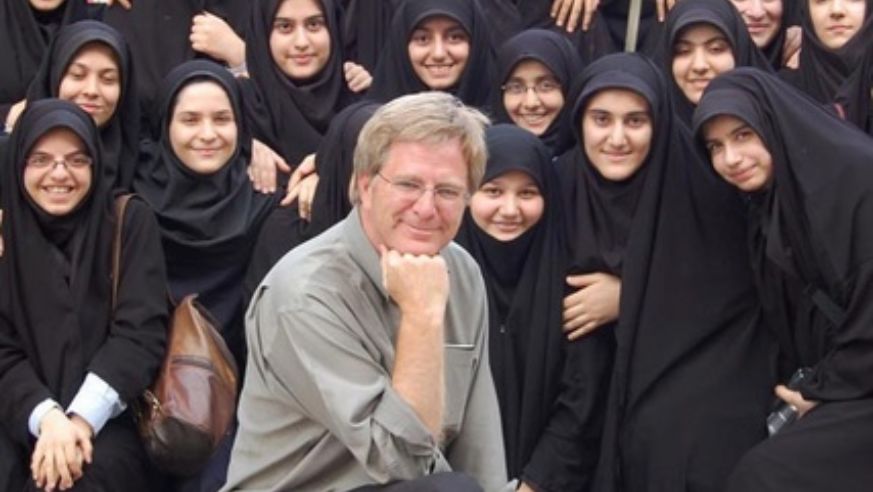 Courtesy Rick Steves
Appropriately modest and with their teachers' blessing, the schoolgirls pose with Rick Steves

After lengthy negotiations and paperwork, travel guru Rick Steves received the go-ahead to take a film crew to Iran for a 10-day shoot in May. They passed through Tehran, Esfahan, Shiraz, and Persepolis. Steves considers the forthcoming show to be a valuable window into Iranian culture—especially given the increasingly tense political relations.

The show won't air on public television until January 2009, but you can get a preview at Steves's blog, which he updated from the road with fascinating anecdotes and photos. I recently chatted with Steves about the trip and how daily life has changed since his prior visit in 1978, when Iran was on the eve of transforming from a monarchy to an Islamic republic.

On his recent return, Steves found the "decadent" society he remembers ("miniskirts were shorter in Tehran than Paris") replaced with a top-down theocracy. But he tried to observe the country without cultural judgment. "I didn't want to go to a mosque and think of it as menacing, but rather as a beautiful community activity," he said.

Steves made a point of attending a Friday prayer service while in Esfahan, where he joined 5,000 worshippers and armed guards in a mosque with a bright mural reading "Death to Israel."

Ruminations he later posted to his blog include initial feelings of apprehension, familiarities he noticed in the service, and unexpected moments like when he made eye contact with a worshiper who winked back or when he caught another man checking a cell phone. Steves was generally struck by a lack of spirituality. "I learned that if you really want your populace to be spiritual, the worst thing you can do is require it of them," Steves said. "I found Turkey to be much more spiritually alive than Iran."

As he met individual Iranians in different places, Steves tried to understand what was important to them. "I've never had so much fun talking with people," he told me. No one could guess where he was from, and when Steves revealed he was American, he says they were most concerned about how he viewed their president, Mahmoud Ahmadinejad, and President Bush—and how he was going to edit the footage of Iran. "They just assumed that I was going to spin it to sound pretty scary," said Steves.

The crew filmed at the University of Tehran, and Steves was disheartened by the lack of student expression: "a strictly enforced dress code, no non-conformist posters, top-down direction for ways to play, segregated classrooms and cantinas, and students toeing the line." But he did point out that there are more women than men in higher education.

While riding the subway, Steves noticed women-only cars, and brought them up in conversations with Iranian women. "They think of it as respect for women to provide a women-only car; they're not required to go in there, but they have the option."

The Iranian government requires women to wear headscarves. Steves discussed the ways that many locals expertly, even stylishly, wore their scarves and how "a wisp of hair could be ravishing." The restrictive dress code also puts an emphasis on facial features that has created an obsession with perfecting noses. Steves's slide show includes a photo of a woman—one of many he encountered—noticeably recovering from a nose job.

Even female tourists must cover their heads, and anyone traveling independently needs to hire a local guide (unless visiting relatives). However, Steves said the policy didn't seem to be strictly enforced. "I met a lot of Europeans using a Lonely Planet guidebook, and they technically had a guide, but he was off somewhere having tea." Iran wants to boost its number of Western visitors, according to Steves, who believes the country will challenge but also charm Americans.

As for the footage of his trip? "I hope people will get the same value out of the show that they get when they travel to a place—that they will better understand it," said Steves. He added that many Americans don't even realize Iranians are Persian, not Arab. "We can all learn more about Iranians, regardless of politics or agenda; I'm bold enough to say it's practical to know somebody before you bomb."

What are your reactions to his trip? Would you consider visiting Iran?