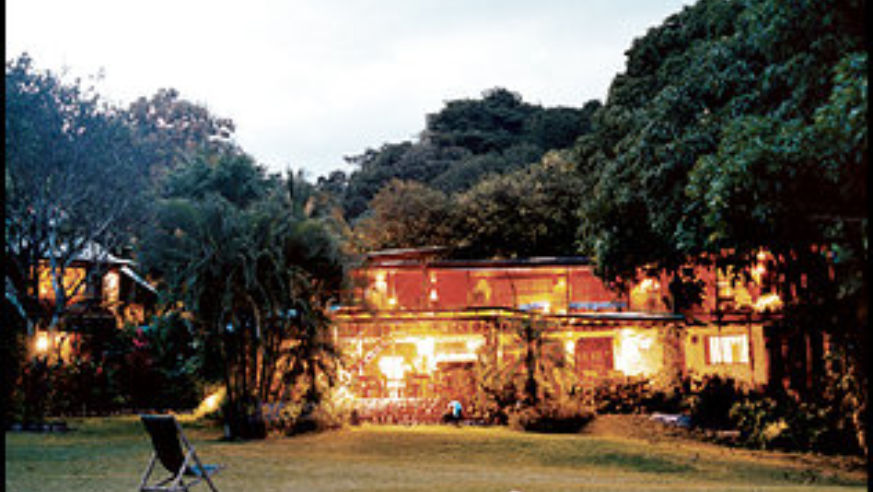 Thayer Allyson Gowdy
The back lawn at Amor de Mar

In a corner of the southern Nicoya Peninsula--a laid-back slice of paradise on the Pacific that surfers would just as soon keep to themselves--we've uncovered nine charming hideaways. Even in high season, none costs more than $145 a night; one has rooms for $22. Don't tell the surfers that you heard about it from us

It takes a certain confidence to put up a hotel in a spot that requires a 15-minute hike on the beach to find, but Ylang-Ylang pulls it off. (You can arrange a lift for you or your bags from sister property El Sano Banano, located in town.) Shielded from the ocean by palm trees, the resort is set in a jungle clearing, and borders a wildlife reserve on one side. Ylang-Ylang's main, two-story building has six rooms, each with pale yellow walls and brightly striped blankets. The eight bungalows are more private; all but one have ocean views from their patios. Stone walkways connect the buildings and are lined with flowering plants and trees, including the fragrant ylang-ylang (naturally). The restaurant's menu was created by a French chef--he trained the kitchen staff and returns periodically to add new dishes such as grilled sea bass in a sauce of tomatoes, mushrooms, and white wine. Montezuma is the most compact and walkable of the southern Nicoya towns. During the day, street vendors sell jewelry and beaded caps from folding tables; at night, surfers and tourists barhop along the main drag. 011-506/642-0636, elbanano.com, doubles from $85, includes breakfast.

An Adirondack-style lodge houses Amor de Mar's 11 rooms, paneled in dark wood and decorated sparely, so as not to distract from the views (best from the second-floor porch). Two rooms share a bath, but the others are private. A patio restaurant serves breakfast and lunch, emphasizing simple fare like tropical smoothies and homemade breads. The wide front lawn gently slopes toward a rocky point, where there's a tide pool big enough to swim in. It's a five-minute walk to the nearest sandy beach, and thrill seekers will be happy to know that Amor de Mar is close to the famed Montezuma Canopy Tour, a zip line that whizzes through treetops and down over waterfalls ($30 for two hours). 011-506/642-0262, amordemar.com, doubles from $55.

The Swiss owners of The Place have combined the famed tidiness of their home country--a custom-built rack neatly stores guests' surfboards--with design-conscious decor. Of the eight rooms, five are bungalows. Each is themed--Ocean Breeze, Out of Africa, Spicy Colors of Mexico, and so on. Some have mosquito netting hanging from a square frame on the ceiling, which lends a bit of drama, and the en suite bathrooms are separated by saloon-style doors. The Place bills itself as a surfer hangout, but the crowd is generally more novice than veteran, and many guests sign up for lessons--$45 for two hours, including board rental. (The hotel is on the nonbeach side of the street, however, and a 10-minute walk from a good surf break.) A large pool is the focal point of an outdoor living room with lounge chairs and daybeds. On Tuesdays, a screen is hung over the pool for movie night. There's no restaurant, but Frank's Place--with tasty ham-and-cheese omelets and shrimp with rice--is two minutes down the road on foot. 011-506/640-0001, theplacemalpais.com, doubles from $80.

A massive three-headed tribal sculpture--you kind of have to see it to understand--marks the entrance to Moana, and it's only the first taste of the hotel's African theme. Wa-Kabwe Kabue-Tshibanda, a Belgian with Congolese roots, has collected angular wooden masks and shields in the Congo and Ivory Coast. They're now scattered around his property--mounted next to the reception desk, near the pool, and on the walls of the seven rooms. Five of the rooms are air-conditioned and some have leopard-print pillows on the single beds. Moana is set on a hillside and has ocean views in the distance; the beach is on the other side of the road. There isn't a restaurant, but rather a well-appointed communal kitchen and a self-serve bar. Located at the southern end of Malpais, Moana is blessedly quiet--the kind of hotel that would be fun to take over with friends. 011-506/640-0230, moanalodge.com, doubles from $60.

It's easy to see why Leonardo DiCaprio stayed here with his girlfriend--the hotel has only four rooms, which guarantees privacy. Caroline Marot and her business partner (and now ex-husband) Philippe Verquin filled each bungalow with Balinese teak furniture, such as intricately carved armoires and antique four-poster beds. At night, guests are encouraged to open all the windows--and one wall of doors that lead to a private veranda--to let in the warm breezes. In the morning, noise from howler monkeys in the trees may provide a comic wake-up call. The bathrooms are private and semi-alfresco: The toilet and sink are under the roof's eaves, but the shower is open to the sky. A seven-table restaurant looks out over the pool, past a well-trimmed lawn, and down to the beach where there's a bamboo massage hut ($55 for an hour). The American chef, James Kelly, draws from Asian influences and makes great use of local seafood. He also plays another role: Marot's fiance. 011-506/640-0023, milarepahotel.com, doubles from $145.

Opened in 2003 by a group of seven Israeli friends who wanted to escape city life, Luz de Vida has built up a loyal clientele of surfers, families, and surfing families. Footpaths lined with palm, guava, and coconut trees lead to 13 cabins, eight with air-conditioning and five without. They're decorated with chunky wood furniture; three have sleeping lofts. Each has a private patio with two rocking chairs and a hammock. The view from the pool--past the restaurant, right down to the ocean--is spectacular. In addition to massages, the on-site spa offers treatments like manicures, pedicures, and peels. Yoga classes are held in an outdoor studio. 011-506/640-0320, luzdevida-resort.com, doubles from $80, includes breakfast; children under 10 stay free.

Experienced surfers, backpacking young couples, and hip parents unafraid to travel with their babies--these are the kinds of free spirits that tend to find common ground at Casa Zen. Kelly Lange, a transplant from Kansas City, Missouri, opened the hotel in December 2004. She rents nine rooms with one or two beds, and three dorm rooms. Even the six shared bathrooms could be considered part of Casa Zen's communal ethos. All rooms are spare but inviting, with batik-print bedspreads and tangerine, ochre, and yellow color schemes. But guests usually hang out either in the hotel's Thai restaurant or in the "rancho," a circular outdoor pavilion decked out with primary-color pillows and comfortable banquettes. It has games, toys, and books for guests, and hosts movie nights on Thursdays and Sundays. 011-506/640-0523, zencostarica.com, doubles from $22, cash only.

This hotel is just off one of the best breaks on the Nicoya Peninsula. Experienced surfers will want to know that despite the property's name, it's actually a beach break, not a point break--but nonsurfers probably won't care. There are six small cabins; the roofs are topped with dried palm fronds and the "walls" are largely screens (the overall effect is like sleeping out on a porch). White cotton curtains add a degree of privacy. The floors are concrete, inlaid with log cross-sections. Each cabin is fronted by a sandy area with deck chairs for lounging. One slightly more expansive cabin has its own bathroom and a fridge. The rest share a large bathroom, whose multiple sinks are out in the open. For groups of four, there are two rooms in a wooden building that's lifted high on stilts, each with a bathroom and a kitchen. It looks like a big, fun tree house. 011-506/640-0190, surfing-malpais.com, doubles from $40, cash and traveler's checks only.

Atop a high bluff, Casa Caletas overlooks the bay where the Coyote River meets the Pacific. The sunsets can be magical. There's no tourist-friendly town nearby, so guests (many of them honeymooners) tend to stay put. The hotel restaurant has a terrific spa-like menu which features fresh fruits, seafood carpaccios, and green salads. It's read out loud tableside, sometimes by chef Cynthia Baltadano herself. Everything has been art-directed at Casa Caletas--even the coconuts lining the walkways have been painted the resort's signature light green--but the place doesn't come off as fussy. An infinity pool takes advantage of the incredible view. The main house is grand, with high beamed ceilings, lots of picture windows, and dark, rattan furniture. The nine rooms have private patios and striking abstract art made from reeds. A junior suite, though no bigger than the other rooms, boasts a private hot tub on its porch. Optional activities are numerous--kayaking ($10), horseback riding ($25), and waterskiing ($50)--but the nearest swimming beach is a mile away. To reach it, you can rent a golf cart for $25 a day. 011-506/289-6060, casacaletas.com, doubles from $130.

When to go, how to get there, what to pack

The best weather is in the dry season, between November and April. It's also high season, and we've listed those prices in this story. May through September is "green season," when it rains often, but in short, torrential bursts; hotel prices tend to be slightly lower. Avoid October; it's usually a washout. No matter when you go, bring an extra pair of flip-flops just for walking through town, as streets can get muddy. And in the dry season, a bandanna or other dust protection, even goggles, is advised for those who drive an ATV or ride a bike--the best ways to explore these small towns.