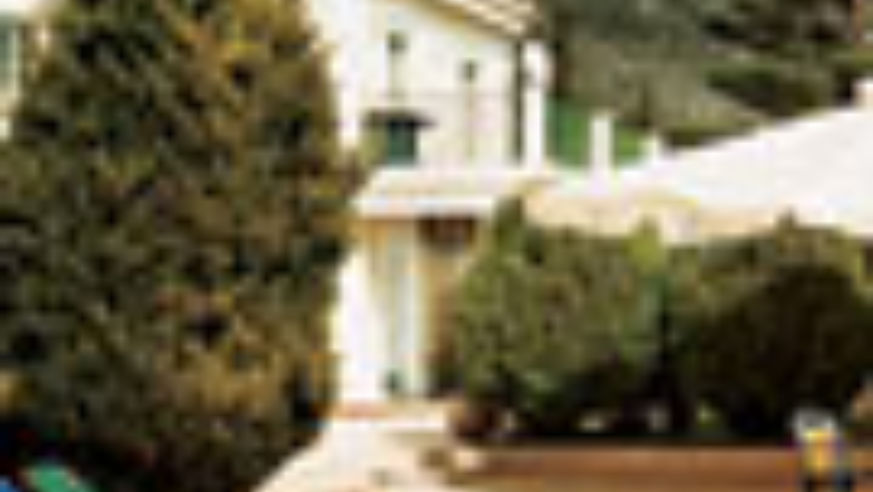 A welcome contrast to the glitzy, white-walled resorts of the Aegean, the intimate, family-run hotels of Greece's western islands offer something significantly more appealing: authentic Mediterranean heritage in homespun settings.

With five brightly painted cottages and two studios clustered around a paisley-shaped swimming pool, Casa Lucia forms a self-contained community in the hills seven and a half miles northwest of Corfu Town, the largest city in the Ionian Islands. English expat Val Androutsopoulos and her now-deceased husband opened the complex 30 years ago; these days she—along with her daughter Zoe, son-in-law Marcello, and their two children—focuses on providing all the homey touches. Each cottage has its own private balcony, patio, or garden, and English-language paperbacks in the rooms offer a compelling reason to call off the day's excursion in favor of a quiet afternoon at the compound. There isn't much that area experts can't deliver right to your doorstep, anyway. Holistic healers and aromatherapists commonly cater to guests' needs on-site, and weekly tai chi, qigong, yoga, and Pilates classes are offered for about $7 per session. (Zoe leads the tai chi classes.) There's no restaurant or breakfast buffet, but the kitchen of each cottage is stocked with yogurt, bread, and homemade orange preserves, and there's a sign-up sheet near the front desk for organic vegetable delivery. Those who opt not to cook can enlist Jo's Catering to supply Mediterranean dinners for $38 per person, including everything from olives to almond cake. Val dispenses advice for outings both nearby (the rustic islet of Vidos just off Corfu Town) and farther afield (the impressive ruins of Butrint in neighboring Albania). There's one caveat Val might issue before directing you to the narrow, picturesque lanes of Corfu Town, however: "It's a 15-minute drive, but allow yourself half an hour to find parking," she says. Sgombou, Corfu, casa-lucia-corfu.com, from $84.

If there's any doubt whether Spyros Spathas values his heritage, just look at the reception area of his Fundana Villas, where a 200-plus-year-old stone olive press serves as a reminder of the Spathas family's six generations of local history. It's been 29 years since Spathas converted his farm's stables and outbuildings into 12 guest bungalows, but the accommodations have been updated with flat-screen TVs and modern kitchenettes. And the views from the rooms are as glorious as ever: Number 10 has two wrought-iron balconies that look out on the Ropa Valley, and Number 12 takes in the green slopes of Mount Pantokrator to the northeast. A guide for the Greek National Tourism Organization for more than 35 years, Spathas maintains a half-mile hiking path to the 18th-century Monastery of St. Onoufrios, open every other Sunday, and leads weekly botanical walks through the area. His 26-year-old son, Foivos, just opened a traditional Corfiote restaurant on the grounds, serving dishes such as veal with garlic sauce and pan-fried artichokes from Fundana's gardens. If you feel inspired to venture off-property for dinner, stop in at Elisavet's taverna in the nearby village of Doukades. There, the grandmotherly proprietress sits in front of her establishment encouraging visitors to try the kokoros pastitsada—rooster over macaroni—a local specialty she's been making for 20 years. Km 15 on the road to Paleokastritsa, fundanavillas.com, doubles from $63, breakfast $8.

The Doukakis family can't take credit for discovering the stellar vantage point at the top of the 935-foot-high Pelekas hill where, in 1990, they built the 25-room Levant Hotel. Kaiser Wilhelm, who summered in this part of Corfu 110 years ago, used to picnic on the rocky observatory (now known as the Kaiser's Throne) just in front of the building site. What the Doukakis clan can claim: the good sense to put down roots in a spot that has ocean views in every direction. Still, the family didn't neglect their hotel's interiors. Its sitting areas are filled with heirlooms—wooden chaise longues, antique china, and portraits of the Kaiser—and stately, wrought-iron bed frames anchor the guest rooms. (To get a sea view, ask for an odd-numbered room on the first floor, or an even-numbered room on the second.) Most days, Mr. Doukakis sits at the bar, teaching guests Greek phrases. As for Mrs. Doukakis, she's everywhere at once: sweeping leaves from the geraniums, shooing away cats that wander up from the village, and managing the kitchen of their restaurant, Sunset. "I have two cooks, but I oversee them all the time," she says, adding, "I'm old-fashioned." With that kind of dedication, it's no wonder the dining room draws such a regular crowd. The wide terrace invites guests to linger over dishes like pastitsada (spicy pasta) and bourdeto (fish stew) until the sky turns from blue to gold over the ocean each evening. Any of the family members can give you directions to three spectacular beaches, all within a 10-minute drive: Kontogialos and Glyfada have deck chairs for rent and tavernas right on the sand; and for those looking to leave without tan lines, Myrtiotissa is frequented by nudists who camp out scandalously close to the whitewashed chapel next to the shore. Pelekas, Corfu, levanthotel.com, from $105 including breakfast.

Bella Venezia's prime location one block from the grassy waterfront Spianada, or esplanade, places it right at the center of Corfiote life. Before the Ziniatis family bought this neoclassical mansion and converted it into a hotel in 1988, the 19th-century landmark was a girls' school. To this day, the owners still follow a popular Corfiote tradition and hang a floral wreath over the door every year on May 1; the following month, neighborhood children come by to collect the wreath for a midsummer-night bonfire. Although the inn's 31 rooms (all with pale-rose-colored walls and voluminous window dressings) were renovated in 2006, the common areas retain many of their original architectural elements, including pink-and-white-checked Ionian-marble floors and 13-foot-high carved-wood ceilings. It's worth spending about $20 more for one of the two honeymoon rooms, an upgrade that buys private balconies and floor-to-ceiling windowed doors. (Avoid rooms 106, 206, and 306, which face a narrow alley.) A simple meal of pastries and yogurt with honey and nuts is laid out each morning in the breakfast pavilion behind the hotel, but for dinner, guests are left to explore on their own in town. The most romantic option is the Corfu Sailing Club, at the foot of the 11th-century Old Fortress; wooden tables in the open-air dining room are just feet away from sailboats knocking against each other in the bay. 4 N. Zambeli St., Corfu Town, bellaveneziahotel.com, from $149 including breakfast.

Cephalonia is the largest of the Ionian Islands, with an area of 288 square miles and about 45 miles of beaches and coastline, making it a prime destination for package tours. Many of the island's hotels dedicate their rooms to big groups, but the Garbis Villas are the exception. George and Irene Garbis built these four seaside maisonettes—one for each of their children—in 1998, and a sense of family permeates the entire complex, down to the photos of the late George Garbis in the small shrine out front. Inside each room is a detailed booklet written by two Garbis brothers. It gives the history of the island and insider takes on key sites, including the underground lake of Melissani, once home to a cult of the god Pan, and the Drogarati Cave, a limestone chamber so large it hosted a Maria Callas concert. They even offer tips for negotiating vegetarian meals in the traditional restaurants ("explain that eating meat is like going against your religion"). The apartments straddle the line between cozy and utilitarian, with kitchenettes, tiled floors, soft couches, and decor that mixes generic accents (framed pictures of sunsets) with the family's treasures (an antique icon of the Virgin Mary). Best of all, on any given morning, you can find Irene greeting guests until 11 a.m., tossing the lucky ones fresh apricots from the garden. Lourdas, Cephalonia, garbisvillas.com, from $70, breakfast not included.

Talk about underselling your appeal; paliokaliva means "old hut" in Greek. But that's far from what you'll find at Paliokaliva Village, a collection of 18 stone cottages that Anastasia Tembonera built in the center of her family's olive grove on the island of Zákinthos, just south of Cephalonia. "I wanted something more traditional and closer to nature," Tembonera says of her decision to leave her job at a pharmacy in 2002 to open the resort, where bougainvillea climbs the stone walls of the cottages and jasmine twines through trees hung with lanterns. By all accounts, the hotel is sleepy: It's located about half a mile up a winding road from the somewhat tacky tourist town of Tsilivi, and the only sounds heard on the grounds are the laughter of kids splashing in the swimming pool and the calls of the occasional vegetable peddler driving through town in his open-bed truck, touting his wares on a loudspeaker. Excitement comes in the form of day trips—to Gerakas, on the island's southeastern tip, where loggerhead sea turtles nest, or to Cape Skinari, to the northwest, to see Shipwreck Beach and swim in the Blue Caves. Each of the cottages has different details, but most have gently distressed furniture (think wooden chairs with artfully peeling paint), lace-curtained dine-in kitchenettes, and desks stocked with handmade pencils designed to look like twigs. Small weather vanes with painted-metal motifs are posted near the doors, so guests can remember they belong in the building with the smiling duck or the little church, rather than something so prosaic as a room number. Still, it's worth noting cottage numbers when making a reservation, and ask for the highest one. Tembonera explains, "As we built each one, we improved on the one we'd done before." Tragaki, Zákinthos, paliokaliva.gr, from $126, breakfast not included.