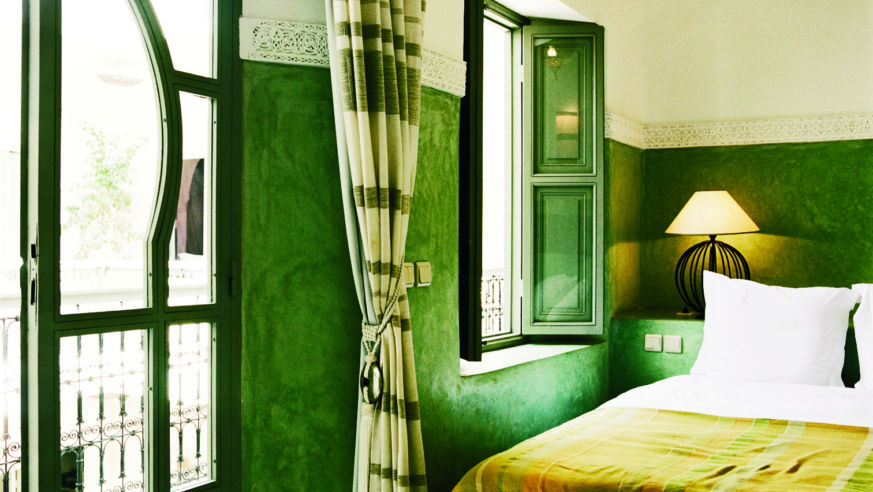 One of six standard doubles at Riad Olema & Spa, the Origan room looks out over the courtyard fountain.

With their quiet courtyards and cozy, traditional rooms, the secret hotels of Marrakech offer an Eden-like respite from the vibrant labyrinth of the medina.

Marrakech is the kind of place where even taxi drivers get lost. At least they do inside the walls of the old city, or medina, a roughly two-square-mile district that dates back more than 800 years. With its tangles of handicrafts stalls and circuitous alleyways (which, as often as not, culminate in dead ends), the medina feels somehow suspended in time. Donkey carts crowd its narrow, dusty streets, and rugs hang like laundry set out to dry. Yet at the same moment, life in the medina can seem as if it's in fast-forward: Snake charmers and storytellers mill about the square; salesmen and hustlers call out "My friend!" and beckon passersby into their shops; commerce and community blur together. Such a frenzy of activity can overwhelm—and in those moments, Marrakech's old city offers the ultimate antidote to the chaos. Behind its windowless, terra-cotta-colored walls lies a wealth of boutique hotels built inside converted Moroccan homes, known as riads. These centuries-old former residences, with their tranquil central courtyards, serve as private sanctuaries, open to the sky but protected from the bustle outside. After a day wandering among the stalls of metalworkers, leather makers, carpet hawkers, cloth dyers, and herb purveyors, a riad is a quiet kaleidoscope of sun, shade, tile work, tapestries, and tinkling fountains. Most of them are run by Europeans, who tend to tell a familiar tale: came for the sun, the food, the culture-and decided to stay. Don't say we didn't warn you.

Many riads sit within the knotted heart of the medina, inaccessible to even the most intrepid taxi driver, but Riad Tizwa, just off the main road to Dar El Bacha palace, is a relative cinch to access—a car deposits you steps from its front door. Such convenience is as important for London-based owners Daniel Bee, a celebrity publicist, and his brother Richard Bee, a BBC documentarian, as it is for their mostly British clientele of fashion models and journalists.

The Bees never intended to become hoteliers. In fact, they bought their three-story riad in 2005 as a family retreat, leaving many of the structure's original features intact, such as traditional tadelakt (polished-plaster) walls and cement floor tiles with geometric patterns. Their only major upgrade was to renovate the house's wood-fired hammam—a traditional Moroccan bathing area equipped with warm, hot, and cold stations. Then a friend borrowed the house for her honeymoon, and she convinced them to open it to the public. The Bees set to serious work. They outfitted the six rooms with romantic touches like canopied beds and colored-glass lanterns, and spruced up the bathrooms with modern European fixtures and handmade rose soap from the Ourika Valley, 45 minutes to the southeast. The brothers also took certain intangibles into account: "Dan and I made a list of all the things we hated about staying in a hotel," says Richard. Right at the top? "When you have to get up in the morning so you don't miss breakfast." So, he says, "we invented the 'Anytime, Anywhere' breakfast. Our record is now 4 p.m." Whatever the hour, Tizwa's breakfasts are memorable, with chocolate croissants, homemade yogurt, fresh bread, muesli, locally made jams, coffee, and mint tea. Take yours on the rooftop terrace, which overlooks a vast mosaic of pink and brown rooftops, interspersed with minarets. 26 Derb Gueraba, Dar El Bacha, holidaymarrakech.com, from $90, breakfast included

A five-minute walk from the main square of Djemaa El Fna and surrounded by souks, the intimate, four-room Dar Attajmil is pretty much an immersion course in Moroccan life. Energetic Italian expat Lucrezia Mutti runs her riad like a cross between a travel agency and a community center: She directs guests to her organic farm in Essaouira, two hours away on the coast; sets them up with guided cultural tours of the Ourika Valley; and arranges bird watching and beach outings upon request. Meanwhile, the riad's long-standing on-site cooking class (from $65 per person), which includes a guided tour of the outdoor market at Bab Doukkala, about 15 minutes away, sheds light on the action within the medina's walls. The half-day course begins with a shopping trip to buy all the supplies needed for the day's meal—often a traditional lamb tagine and the four typical side dishes (eggplant, zucchini, lentils, and peppers), although guests can weigh in on the menu options the evening before. Back at Attajmil's kitchen, Loubna Serhani, a university literature student, translates the cook's instructions as participants peel, core, dice, julienne, pare, and cook the ingredients. This kind of personal engagement is a key principle for Mutti. "I wanted to make a place where people can rest and recenter from a busy Western life," she says. "Entering a different, rich culture helps us look at our own—and at our own problems—from a little distance." There's no shortage of choice places on-site to unwind and reflect, like the shaded courtyard, where a tiled fountain mutes the periodic buzz of mopeds outside. Or one of the four guest rooms, all painted in warm hues, layered with textiles and tapestries, and decorated with hammered-copper sinks and old-fashioned mosaics called zellij. Their ceramic tiles, hand-chiseled and painted with enamel, were assembled with as much painstaking care as everything else in Dar Attajmil.23 Rue Laksour, Quartie Laksour, darattajmil.com, from $120, breakfast included

It would be difficult to find a riad with a better pedigree than this: Delphine Mottet and Jean-François Claeys's Tchaikana was renovated with the help of fellow Belgian Quentin Wilbaux, an architect and the author of Marrakech: The Secret of Courtyard Houses. The 1999 book helped fuel the trend of Europeans refurbishing old Moroccan homes, and Tchaikana's 2002 conversion—a three-room, two-suite place in the heart of the medina—was one of the earliest to hit the scene. Wilbaux worked with the couple to create a truly convivial atmosphere accented by hints of home. "We wanted it to feel like a guesthouse, not a hotel," Mottet explains, "So for starters, we chose not to have a lobby." Mottet, a graphic designer, also favored an eclectic and casual approach to decoration, combining totem-pole bedposts with tapestries from Burkina Faso and rough-hewn iron sideboards made by French-trained Moroccan Daniel Oiknine. In one particularly poetic nod to the owners' previous life, the shutters, doors, and arched gallery on the second level are all painted a calming, dusty teal called Belgian Blue. Down in the courtyard, an arched nook is the designated spot for a regular cocktail hour. Each night, as the proprietors pour drinks and dole out recommendations for local restaurants and shops, guests snack on honey-sesame peanuts and swap stories. And if you should get lost en route to the exceptionally hard-to-find riad (it's tucked into a dead-end alley east of the medina's center), the couple will happily send a porter to fetch you right to the door. 25 Derb El Ferrane, Azbest, tchaikana.com, from $118, breakfast included

"I've always been amused by the mythology of 1960s Marrakech—Burroughs, Hendrix, the fashion set mixed with rock and roll," says Norwegian architect Knut Hovland, who opened his four-room P'tit Habibi (the name means "little darling") in 2005. It shows. The whole place resembles a movie set from a bygone era, from the mirrored table in the salon to the cascading, Verner Panton–inspired brass-ring chandelier in the library. Even the dining chairs are upholstered in a mod, orange-and-yellow floral print. The four individually designed guest rooms are similarly varied: A bed with a zellij headboard might be framed by an arched niche or presided over by the mounted antlers of a Swedish moose; a Space Invaders–themed bathroom mirror is as proudly displayed as an elaborately hand-painted dresser. Yet as far out as P'tit Habibi gets, it manages to stay true to its roots; imagine an entire wall of plaster bas-relief and a traditional oval pattern on the floor that echoes throughout the riad's wooden railings and fireplace tiles. Hovland's renovation also expanded upon the courtyard-centered architecture: The floor-to-ceiling sliding-glass doors that he installed create one fluid space between the ground-level common areas and the travertine-paved patio, which doubles as an alfresco movie theater. Guests can choose a DVD from the riad's collection, pull up a beanbag, and watch the film projected on one of the building's solid-white walls. Up on the breezy roof, there's a tiered terrace with a pool, a canopied daybed, and a handful of tables for taking in one of Marrakech's other cinematic moments: the vivid sunset over the northernmost section of the old city. 59 bis Sidi Ghanem, Zaouia Bab Lakhmis, ptithabibi.com, from $118, breakfast included

When Philip Brebner was renovating Riad Porte Royale five years ago, many new riad owners were fixated on what he calls "their oriental dream"—all sumptuous furnishings, patterned rugs, and a solicitous staff tending to guests' every whim. To Brebner, who studied Islamic architecture in Algeria and then taught the subject at Portugal's University of Porto, that over-the-top aesthetic sounded more like a nightmare. "I wanted to take everything right back to basics, the way riads used to be, completely white, very simple, with just a few exquisite artifacts," says Brebner, who comes to Marrakech nearly once a month and brings his family here twice a year. It's fitting, then, that he chose the porte royale, an architectural element that symbolizes the angels' gateway to heaven in Islam, to serve as both his riad's namesake and the centerpiece of its otherwise sparsely decorated courtyard. He spent weeks rooting around the medina to find the 12-foot cedar piece, a museum-quality specimen carved and painted with the eightfold division of a circle, a common motif in Islamic design. Having located his conceptual cornerstone, Brebner  turned his attention to the rest of the renovation: He installed a colonnade along the door, connecting the roof terrace on all four sides, and added a zellij-tiled plunge pool. And while the five guest rooms kept their original narrow dimensions, which were dictated by the size of the palm trunks used for the ceiling beams, Brebner upgraded the spaces with en-suite baths and dark-wood West African and Berber furnishings. 84 Derb El Maada, Diour Jdad, Zaouia, riadporteroyale.com, from $98, breakfast included

Although its very location in Marrakech can lend a riad an undercurrent of exotic luxury, few are actually branded as resorts. But then, few riad owners are as ambitious as Philippe Schwarz, a former banker from France who gutted two neighboring residences and combined them to build his eight-room, 3,200-square-foot Riad Olema & Spa in 2008. "It's a fusion, a mix of contemporary style and Moroccan touches," Schwarz says, a statement that applies to both the riad's look and its approach. The rooms skew modern, with Western amenities and services—there are flat-screen TVs, DVD players, fluffy robes, and a nightly turndown service. Still, for all the cosmopolitan trappings, the resort is built around a centuries-old ritual that couldn't be more Moroccan: steaming in a hammam, washing with savon noir (olive-grist soap), exfoliating the skin with a special glove, and applying a body mask made of ghassoul (ra-su-ul), a 1,400-year-old treatment that uses clay found only in the Atlas mountains. Olema's hammam is on the second floor, but other treatments (marjoram-oil massages, ylang-ylang-and-honey facials, and manicures, starting at $12) are offered in two on-site spa rooms or within the privacy of a guest's own suite. 32 Derb Sidi Ahmed ou Moussa, Bab Doukkala, riadolemaspa.com, from $130, breakfast included

11 Places You Want to Be Right Now