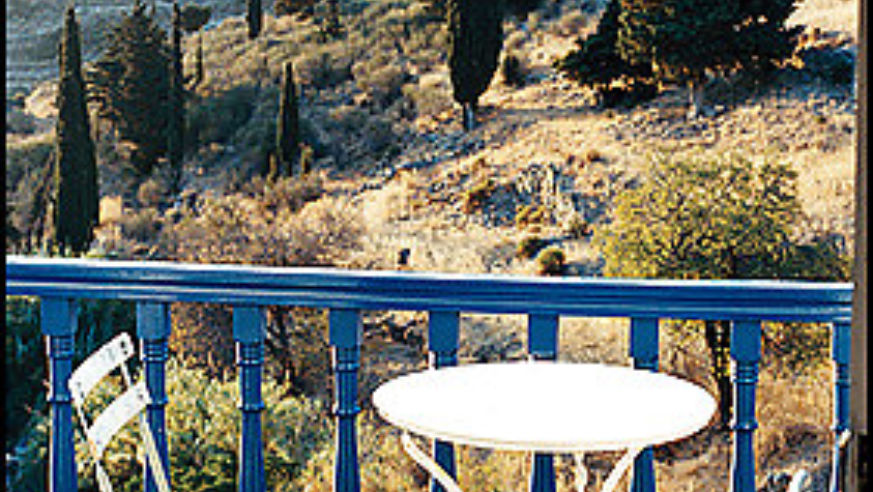 If you're seeking peace, quiet, and a killer tan, look no further than the islands of P&aacute;ros and Antiparos.

PÁROS
Hotel Petres
Cléa Chatzinikolakis knows the island's secrets--and she can share them in five languages: Greek, English, French, Italian, and Arabic. Over a welcome drink, Cléa pulls out a map and tells guests where to swim if they want a little privacy ("Park here and follow the rope through the trees") and which taverna serves the best grilled fish (Mitsis, in Little Venice, one of three bays in the town of Naoussa). The only problem with following her advice is that it means leaving the haven she and her husband, Sotiris, have created--a place where it's very tempting to spend the day just lounging around the pool or playing tennis on the artificial-grass court. A former ad executive (Cléa) and production manager (Sotiris) at McCann Erickson in Athens, the Chatzinikolakises bought the property about a mile and a half outside Naoussa with the intention of building a summer home. But they decided they wanted to spend more time on Páros, so they opened Petres in 1994. All 16 rooms and the one suite have views of the sea. The couple's flair and attention to detail are visible everywhere, from the threshing boards they've turned into coffee tables; to the shells, icons, and evil-eye talismans in unexpected corners; to the fact that the Jacuzzi in the fitness center has a view of the sea and the steam room looks out to the mountains. Each morning, a buffet breakfast with homemade savory pies and strong coffee is served poolside. 011-30/22840-52467, petres.gr, from $98, includes breakfast, open mid-April to mid-October.

Maryo Village
A half-mile outside Naoussa, the 12-room Maryo Village is named for the owner's grandmother--but that's the only grandmotherly thing about it. First opened in 1986, the hotel was renovated in 2002 and is decorated in a Poseidon-meets-Philippe Starck vibe. The combination of Greek and chic is evident on the large terrace, where an infinity pool overlooks the countryside and sea. Next to the pool is an outdoor bar area with rattan sofas and white canvas cushions, colorful glass lanterns, and chess and backgammon boards. The hotel feels like a private club, not least because its entrance is at the end of a winding road, unmarked, and hard to find. "We had a sign, but it blew away so many times that after the last big winds, we felt bad for it," says manager Mania Simitzi, explaining why the sign was never put back up again. "Besides, most of our guests are repeat visitors, so they know where to go." Rooms at Maryo Village have televisions, mosquito-net canopies over the built-in beds, a wash of bright blue or red on the walls, and balconies. Katerina, a double, and Maryo, a minisuite (the chaise makes it suitable for three) have the best views of both the sea and the courtyard. 011-30/22840-51972, maryovillage.gr, from $104, includes breakfast, open April to mid-October.

Heaven Naoussa
Lennart Pihl, a hotelier and antiques collector, opened Heaven Naoussa five years ago near the heart of Naoussa. "It's more of a bed-and-breakfast, really," says Pihl, explaining that guests tend not to stay put during the day. Instead, they hop on one of the small fishing boats that make frequent runs from the harbor to nearby swimming spots, including Kolymbithres, a series of shallow bays created by volcanic-rock deposits, and Monastiri, a popular beach at the foot of a cliff that's topped with a monastery. Heaven's four rooms, five suites, and two maisonettes (two-bedroom apartments with kitchenettes and a shared plunge pool) have private balconies and are filled with antiques. Martina Blair, the manager, offers advice on where to eat and what to see and do. She also makes arrangements for the daily in-room breakfast (usually set up on the balcony) of yogurt, fruit, honey, muesli, coffee, and juice. 011-30/22840-51549, heaven-naoussa.com, from $98, includes breakfast, open June to October.

Lefkes Village
Lefkes was the original capital of Páros, chosen because its inland, hilltop location stymied pirates. It's one of the most beautiful towns in Greece, with views of the sea, the church of Agia Triada at the very peak, and windmills that dot the countryside. Lefkes Village resort, within walking distance of town, was built in 1995. The reception area and restaurant were modeled on Lefkes's neoclassical kafenia (coffee shops); instead of old men sipping ouzo, its pergola shelters guests as they lounge around the pool. In the evening, the restaurant serves local specialties (such as paximadokoulouro, cheese-and-tomato salad on rusk, a kind of biscuit), while George Pittas, who co-owns the hotel with a cousin, plays DJ. Lefkes Village also features a dovecote where grapes are stomped during the late-summer wine-making season and a folk museum with a collection of old photos, urns, and tools. All of the 20 rooms (14 doubles and triples, and six duplex family rooms) have either a balcony or terrace. 011-30/22840-41827, lefkesvillage.gr, from $117, includes breakfast, open April to early October.

Albatross Bungalows
"We want everyone to leave with the best impressions, not just of the hotel, but of Páros," says Stella Logaridou, owner of Albatross Bungalows, which her family opened in 1992 on the east side of the island, in the town of Logaras. To that end, she'll arrange sailing, fishing, sea kayaking, and more. Logaridou cheerfully oversees all the minutiae involved in running the property: making sure the TV room is stocked with children's DVDs, sourcing the yogurt served at breakfast from a small farm in northern Greece, and making note of guest preferences. "For the past six years, the Dimitriades family has wanted Room 317," she says, showing off the view from the balcony to the mountaintop monastery of Agios Antonios. All but 10 of the 36 rooms have sea views, but Logaridou notes, pointing at the village of Marpissa seen from Room 205, "The sea views aren't necessarily the best." Each room has a terrace and deftly combines old-world charm--evident in details such as the curtains embroidered by Logaridou's godmother--with modern conveniences like A/C and a television. 011-30/22840-41157, albatross.gr, from $75, open May to October.

ANTIPAROS
Kastro Apartments
If Páros is the perfect honeymoon destination, Antiparos (with only a thousand full-time residents) is the ideal spot to bring the kids years later. "It's a family island," says Magda Maounis, who runs Kastro Apartments with her husband, Markos. To say the Maounises are accommodating would be an understatement. They'll take the ferry across to Páros to pick up guests who are in danger of missing the last boat (they can cajole the captains into waiting). They insist on meeting visitors at the harbor, so they won't get lost on the two-minute drive to the hotel. They'll organize cooking classes and sunset cruises and even plan weddings. The eight studios and six larger apartments are sparely furnished, but all have sea views. The hotel is steps from two sandy beaches, and it's a short walk down a cobblestoned street from charming Antiparos town. 011-30/22840-61011, antiparosgreece.com, from $52, open April to mid-October.

Oliaros Studios
Oliaros is the ancient Greek name for Antiparos, so it's appropriate that the eight rooms at Oliaros Studios are very traditional, with terraces, whitewashed walls, embroidered curtains, blue doors and shutters, and folk art on the walls, as well as kitchenettes, satellite TV, and air-conditioning. There are three doubles and five duplexes with two beds downstairs and a master bedroom on a mezzanine (or vice versa). The owner, Vassilis Germanopoulos, runs the family hotel on property his grandfather bought right above Agios Giorgos beach at the southern tip of the island. Germanopoulos's youthful energy is evident in the popular sea-kayaking excursions he organizes from Oliaros out to the sea caves of Antiparos and the uninhabited satellite island of Despotiko, with its many archaeological excavations. 011-30/22840-25305, oliaros.gr, from $75, open May to October.

Lilly's Island
"Here, people really to come to relax," says Lilly Arber, describing both the Jimmy Buffett--esque vibe of Antiparos and the feel of her hotel. A Swiss interior designer who met her Greek husband, Derek, on her first night of a vacation in Greece, Lilly believes she was fated to build a home on Antiparos. "It was kismet," she says. "Even coming over on the ferry, I loved the feeling of escaping to this small island." The hotel's four doubles, five studios (one room with three beds), and three 2-bedroom apartments have verandas; several have two, "to catch both the morning and evening sun," explains Lilly. Views vary: Room 15 has a marvelous sea view, while Room 8 lacks one. There are also two freestanding houses within the complex: Romantic House, a snug double; and Sweet House, which sleeps as many as four in its bedroom and sitting room. In the morning, guests gather around the pool for a breakfast of homemade marmalades and cakes. Afterward, they walk five minutes to the beach or hitch a ride with Lilly and Derek to swimming spots farther away. At 9:30 p.m., after the pool bar closes, guests wander down the path leading to town, in search of the restaurants Lilly has recommended: Sifneiko for sunset drinks and "the best pizza anywhere," and Tsipouradiko for Greek mezes (small plates) enjoyed while looking over the harbor. 011-30/22840-61411, lillysisland.com, from $65, open May to October.

Páros and Antiparos: Getting There and Around
Olympic Airlines flies several times a day from Athens to Páros (olympicairlines.com, from $75 each way, 45 minutes). Lots of ferry companies make the run between the Athenian port of Piraeus and Páros harbor at least twice a day. Hellenic Seaways' three-hour superfast ferry is the quickest (hellenicseaways.gr, $57; book online, then pick tickets up in person at Piraeus).

A seven-minute ferry ride brings passengers from the town of Pounta on the southern coast of Páros to Antiparos harbor, with departures roughly every half hour (no reservations are necessary, passengers 75¢, cars $8). The main drag in Antiparos town is home to several places where you can rent cars, mopeds, and bikes.