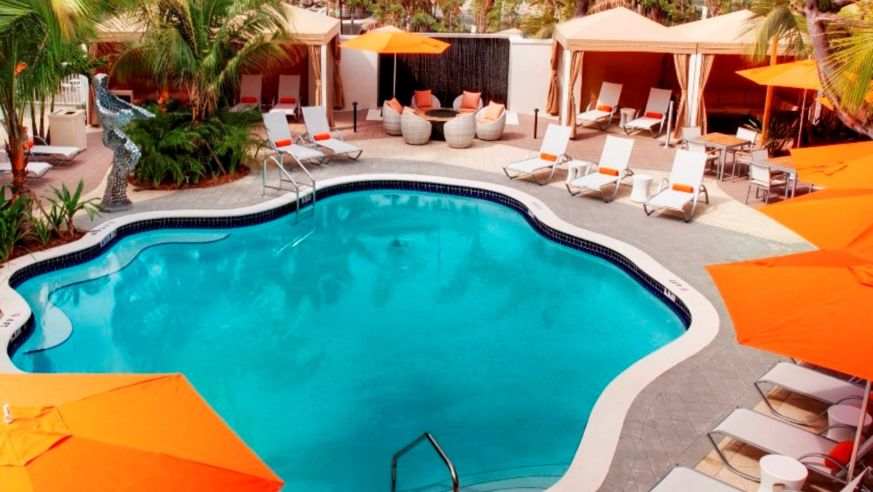 Welcome to Miami! A traveler used Priceline to score a deal at Hotel Urbano (above) for $81 per night, according to the BiddingforTravel.com message boards.

Shhh... Here's what no one tells you about finding travel deals on Priceline. Use these tips to search wisely, bid smart, and save big.

We all want to be that person who swoops in at the last minute, bids low, and scores a ridiculously good deal on Priceline—then brags about it for years. Flying blind can be scary, though: You don't know for sure which hotel you'll be staying in, what car rental company you'll be dealing with, or what your flight times will be—and they're often non-refundable. (Type-A planners, we can practically hear you hyperventilating right now.)

It's normal to feel uneasy about pulling the trigger immediately—if at all—but the risk could be worth it. "I think everyone knows Priceline is pretty much almost always 5 to 10 to 15 percent cheaper than Hotwire," says travel expert John DiScala, better known as Johnny Jet. If that's the case, think of the potential for savings on widely published rates.

So take a deep breath. We've got a strategy. These little-known features and expert tips will help you nudge the odds in your favor when you're bidding on Priceline.

Are they comprehensive and foolproof? No. Are they helpful as a general guide? Yes. Message boards like BiddingforTravel.com and BetterBidding.com, and sites with simpler interfaces such as BiddingTraveler.com, report recently accepted and rejected bids, along with hotel lists with their best guesses at which properties you could end up with based on star rating and geographic area.

DiScala says he always visits BiddingforTravel.com before he bids. Not long ago, he scored a major deal on a rental car in Seattle after finding $80-per-day rates with Hertz on conventional booking sites—higher than he wanted to pay. "I went to Bidding for Travel, and I saw someone was getting a $20 deal around the same dates," he says. "So I went in, and I put a $20 bid in, and sure enough it was accepted, and it was by Hertz." DiScala notes that the site warned him that his bid was too cheap, but it went through in the end.

When using these outside sites, bear in mind that the Priceline's offerings, star ratings, and geographic regions can shift without warning, and some info could be outdated. And the boards can be a pain to sift through if patience is not one of your virtues.

2. Beat the system and bid again immediately by making one small tweak.

Priceline prevents you from bidding again for 24 hours on the exact geographic preference and rating when you use the Name Your Own Price feature, but you can get around that if you're flexible. "If you change the star category or add a neighborhood, you can bid again right away," says Tim Leffel, author of The World's Cheapest Destinations. Same goes for switching up other itinerary items, like travel dates, car types, and airports. You can get something that Priceline users call a "free rebid" on hotels by adding a geographic area that only offers properties with fewer stars than the rating you selected, making your rebid essentially identical, as Priceline won't "demote" you to a lower-rated hotel. Proceed with caution on this one, especially if the added geographic area is one you emphatically do not want to be in.

3. Pit the Express Deals feature against the Name Your Own Price feature.

Priceline offers different types of deals. Let's use hotel rooms as an example: Priceline's "Retail" deals reveal both the hotel name and the price, so you know exactly what you're getting. "Express Deals" shows you the exact price of a hotel in the geographic area and with the star rating that you want, but you won't see the hotel's name—that's called a "semi-opaque" deal. The "Name Your Own Price" feature lets you bid on a hotel price, but you won't see the hotel's name either—that's called an "opaque" deal.

Search Express Deals first, then try this strategy that we heard directly from Priceline: "For hotels, travelers should find the lowest Express Deals hotel bid being offered, then take an additional 5 percent off and use that as their Name Your Own Price bid. Chances are you'll get a room," says Brian Ek, Priceline's travel expert. "If not, no harm done, and you can always go back and make a reservation using Express Deals as well. With airline tickets, try going 20 percent below the typical published fares. And with rental cars, go 20 percent below the published rates."

For (very) last-minute getaways, install Priceline's free app and scroll through the hotel listings for Tonight Only Mobile Deals—they're highlighted in orange. (Think of it as Priceline's version of Hotel Tonight.) Here's the cool part: There you'll find special deals that aren't listed on the desktop site. "We upload new inventory daily and travelers can save up to 50 percent at more than 800 hotels for day-of reservations," Ek says.

5. Once you arrive at the hotel, never underestimate the power of a friendly attitude and a greased palm.

As we've mentioned in past stories, the hotel's front desk clerk wields immense power. Get in good with her, and your discounted stay could take a luxe turn. "A few times in the past I would get a cheap room via Priceline and then would slip a nice tip to the front desk person and get upgraded to a better room," Leffel says. "This is easier to pull off if you're arriving late in the day and the occupancy is set for the night." Offering a bar of chocolate to the desk attendant has also been known to work well in these circumstances.

6. Speak up—loudly—if you believe the staff is giving you the shaft because you bought a Priceline room.

Your Priceline hotel is required to treat you the same as it does its guests who have paid full price. It's the law. "Our agreements with hotels stipulate that our customers receive the same treatment as any other customer," Ek says. If you get the sense you're being mistreated or ignored because you're a Priceline guest, contact Priceline immediately either via their customer service email form or at 877-477-5807.