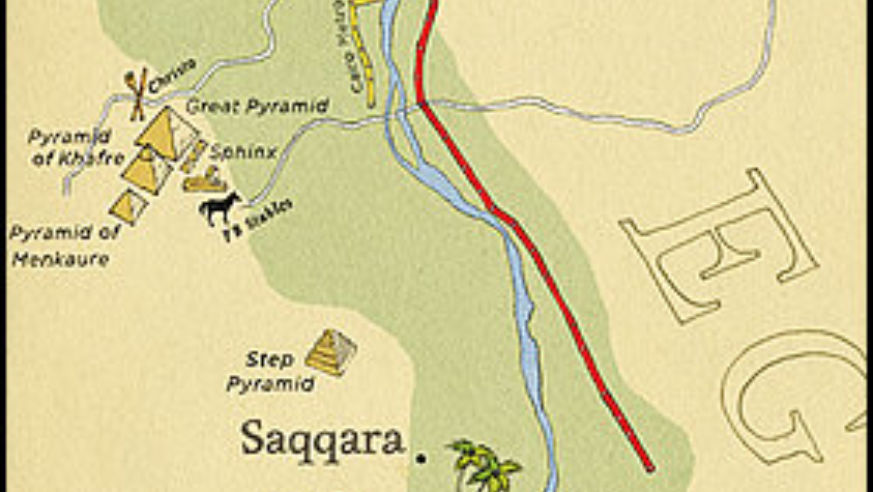 A sanity-saving plan of action for taking in the earth's most famous (and eternally mobbed) monuments.

Incongruous and dazzling in the desert sun, the pyramids peek out over a frenetic metropolis of 16 million. Your first glimpse comes on Cairo's Ring Road, a 20-year-long public works project that was finally wrapped up late last year. With crazy traffic, more ruins than you can count, and temperatures reaching 104 degrees Fahrenheit in the height of summer, your choice of where to go, and how to get there, is a weighty one. Whether you want to visit the classic Giza complex, surrounded by cemeteries full of mastabas (tombs); the quieter, and slightly farther afield, pyramids of Dahshûr; or the emerging discoveries at Saqqara, we've mapped out an insider's guide to help you ditch the millions of others trying to do just the same. Wherever you head—and whomever you're surrounded by—these ancient structures stand defiant against a duneland devoid of life, a scene mankind has been marveling at for the past 5,000 years.

Giza, home to the pyramid complex closest to Cairo, is now the second-largest suburb in the world (pop. 2.5 million). Admission to the complex is $10. Tickets to the burial chamber in the Great Pyramid are an extra $18 and are limited to 300 per day in high season, September to March—half in the morning (line up by 8 a.m.) and the other half around noon. After the pyramids close at 4 p.m., hit Cairo's Egyptian Museum, which is open until 6 p.m. and holds, among many other treasures, King Tut's chariots and famous gold mask. Museum admission $9, mummy room $18.

On the footprint of the former capital city Memphis, the necropolis Saqqara, 14 miles south of Cairo, has 11 pyramids, including Egypt's first, the Step Pyramid, as well as the Imhotep Museum. What sets Saqqara apart: freshly unveiled wonders, including, since 2007, mummies and sarcophagi and, as recently as January, large tombs. The 40-or-so-minute taxi ride from Cairo costs about $45 round trip. Step Pyramid and Imhotep Museum admission $10.

About 28 miles south of Cairo, two Old Kingdom pyramids remain intact at Dahshûr: the Red, the world's oldest example of the classic style; and the Bent, the work of an overambitious pharaoh who changed the angle of rise halfway up so that the structure appears to bend. Dahshûr complex admission $7.

More than 11 million passengers a year are expected to pass through Cairo International Airport's new Terminal 3—double the capacity of the other two terminals combined. It's 13 miles northeast of Cairo; a taxi ride into the city center should run you $9 (but most hotels offer free pickup and drop-off).

By Car
The most popular way to reach the Giza Plateau, 16 miles from the city center, is by the Ring Road; plan on anywhere from 20 minutes to 1.5 hours, depending on what time you set out. Rent a private car and driver for a full day (smartlimo.com, from $100) or take a metered yellow Cairo Cab—a mere $5.50 one way.

By Metro
In 2000, in an ill-fated effort to ease congestion, Cairo finished Line 2 with a station (El Monib) seven miles south of Giza. During rush hour, going by metro can save you an hour—but you still have to catch a $3 cab ride to the pyramids. Line 3, known as the "myth of Cairo," is set to open in 2011. nat.org.eg, about 25¢/ride.

By Horse
One way to beat the traffic: Hoof it! Rent an Arabian horse from FB Stables and set off from Giza to Saqqara and Dahshûr on a desert day trip. Gamal Abdul Nasser St., Giza, fbstables.com, half- or full-day rides $18/hour.

For more information on all, go to egypt.travel.

"The pyramids of Giza sit just outside the city wall like grand old gentlemen keeping a watchful eye. One guidebook says Cairo is a tough city, but if you love her, she'll love you back. Right now, Cairo and I are in strong like." —Bill Aulwes, Long Beach, Calif.

NEXT: MEET THE MOAI OF EASTER ISLAND >>