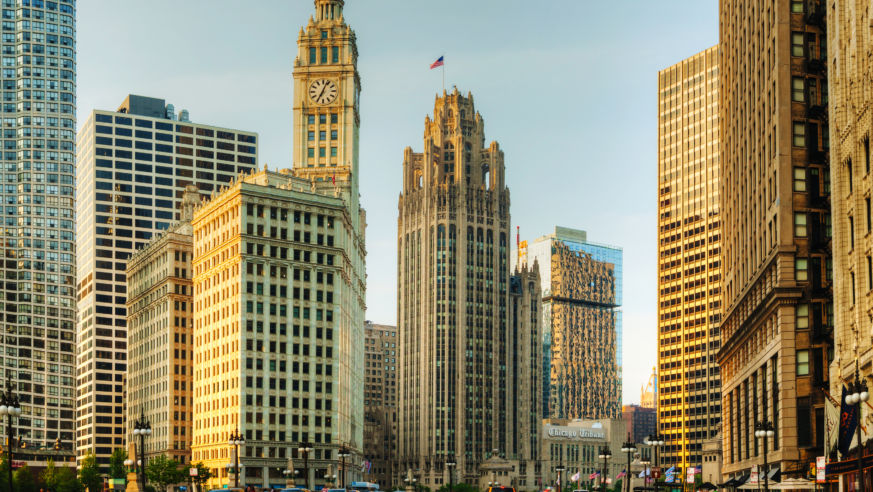 See the lesser-known nooks and crannies of Downtown Chicago—without paying a dime.

Often the best way to explore a new city is on your own two feet. Jeff Mikos, founder of Free Chicago Walking Tours, is no stranger to that idea—the inspiration for his business came from a meaningful international trip.

“My wife and I took a year off to travel the world in 2015,” he says. “While in South America we stumbled upon free walking tours in almost all the major cities, including Santiago, Cusco, Quito, Cartagena, and La Paz. After the first few, I began to think that there was an opportunity to bring this style of tour to the USA. Having grown up in here, launching the business in Chicago made perfect sense.”

Free Chicago Walking Tours offers guided strolls seven days a week, and covers two miles over two hours, including iconic areas like the Loop, Chicago River, the Magnificent Mile, and Lincoln Park. “This makes the city accessible to anyone, regardless of their budget,” Mikos says. “Chicago can be quite expensive, and our tours give guests the opportunity to experience the city like they never have before, while saving a few bucks too.”

To give Budget Travel readers a taste of the company, Mikos shared a special stroll just for us. Print it out, then, get ready...get set...get walking!

Michigan Avenue—a.k.a. the Magnificent Mile—is Chicago’s largest shopping district and second in the USA only to New York City’s Fifth Avenue in Manhattan. But you don't need to spend money to enjoy yourself on this famous strip. In fact, we think the best way to experience the splendor that is Magnificent Mile isn’t by shopping at all of the stores along the way, but hitting lesser-known destinations, such as a rotating gallery, a gorgeous church, and being face-to-face with artifacts from the world’s most famous and historically significant sites. The best part? It’s all free.

The awning of the Drake Hotel on Lake Shore Drive just east of the corner of Michigan Avenue.

We like starting here for a variety of reasons. The Drake Hotel was essentially the city's first “resort." In the 1920s, this was an escape for Chicagoans as it sat on the shores of Lake Michigan. Today you can still live like a 1920s socialite by visiting their Palm Court for afternoon teatime (not really budget-friendly, but quite nice for $45 per adult, open daily from 1 to 5 p.m.).

The corner of Delaware Place and Michigan Avenue.

Sitting on the corner is the Fourth Presbyterian Church. The church is a product of combining two other churches on October 8, 1871. Unfortunately, the next day was the start of the Great Chicago Fire, and the church was destroyed. It was rebuilt and relocated to its current spot in 1940.

The best place to snap a breathtaking Instagram is across the street (on the east side of Michigan Avenue) or from inside. The church is open daily at 7:30 a.m. Please respect the congregation with your noise level.

You'll be right across the street from the John Hancock (or right in front of it). It’s officially called the John Hancock Center because the original plan was to have multiple buildings. However, the builders couldn't convince the owners of the Casino Club (located directly behind the JHC on Delaware) to sell their property, and thus we have only one building.

The John Hancock Center is home to the 360-degree Chicago Observation Deck, located on the 94th floor. Some say it has the best views of Chicago. We don't disagree with that, but we do disagree a little with the $20 price tag to get there. Instead go up two more floors to the 96th floor and visit the John Hancock Signature Lounge. The views are free and incredible as well, plus you'll get to enjoy a tasty cocktail too.

This spot is often overlooked because many don't know a.) what's in the building and b.) that it’s open to the public. The visit will be quick and cool. This is the new and functioning home to Chicago’s water pumps (well, four of them). Inside, along with water pumps, you will find a variety of helpful guides to answer questions.

This is the famous Chicago Water Tower that survived the Great Chicago Fire of 1871 (one of only a handful of buildings north of the Chicago River that remain today). The gorgeous building is a symbol of Chicago’s recovery from the fire. It has undergone a couple of renovations since the 1870s and is now home to a rotating—and free—gallery. Make sure you stop in to see what's showing when you visit.

Your final destination will be the Tribune Tower near the south end of the street by the river. This is by far the biggest stretch (1/2 mile) of walking that you will do on this DIY Magnificent Mile Walking Tour.

Soak in the sights and the sounds. You’re in the thick of what Michigan Avenue is known for: shopping. The rents here for stores are incredible, at more than $500 per square foot per year. Many stores on this strip don't make money; they are there for branding and marketing purposes.

Chicago’s Peninsula Hotel, the largest Disney store in America, and the Warwick Allerton Hotelall call the Magnificent Mile home. The Warwick was home to the Tip Tap Room, a lounge on the 23rd floor of the hotel that made a name for itself with its signature drink: the Moscow Mule.

This is one of our favorite buildings in the city. The Tribune Tower is beautiful. It has a storied history and is home to many real artifacts from sites all around the globe.

The building is the result of when the Chicago Tribune (the largest Chicago newspaper) hosted a contest in 1922 to design the most beautiful office building in the world. $100,000 of prize money was available, and the winner would receive $50,000 of that. Over 50 entries were received, and the neo-Gothic design you’re looking at today was the winner, from a small architecture firm from New York City called Howells & Hood.

When the winner was selected, there were many “experts” that believed other entries should have won. To this day, there are rumors that the contest was fixed, but thus far there is no solid evidence to support that theory.

Prior to the construction of the tower, the owner of the Tribune Company, Colonel McCormick, instructed his employees to bring back artifacts from historically important sites from around the world. These artifacts were collected and then incorporated into the building’s exterior. Make sure to take a walk around and see all the pieces the company collected that are now on full display.

Where to go from here?

Great question. Before you go just anywhere, look across the street. The glazed terra-cotta structure in front of you is the Wrigley Building—one of our favorites. The clock on the south tower is almost 20 feet in diameter!

Just another 0.7 miles south along Michigan Avenue is the entrance to Millennium Park and Cloud Gate, a.k.a. the Bean, artist Anish Kapoor's first public outdoor work. Have your camera out to capture your reflection in its surface. Another half mile south from the Bean is Buckingham Fountain.

If you need a break from walking, you’re just a few steps from the most photographed bridge in Chicago: the Du Sable Bridge, named after the first known settler of the region. The American flag, Illinois State flag, and Chicago flag blowing in the wind alongside the buildings on the Mag Mile are a popular photograph.

With the money you have saved on this DIY walking tour, you can afford to purchase a ticket to the Chicago Big Bus hop-on, hop-off bus, which departs just north of the bridge on the east side of Michigan Avenue. Or take an architectural boat tour that boards right at the bridge as well. All of the companies will have representatives vying for your business and should cost $30 to $45 per person.