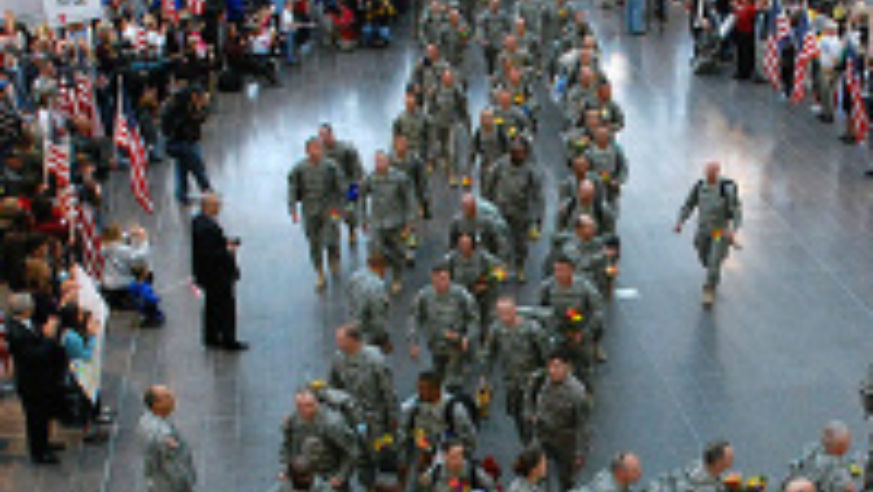 In mid-May, United began early boarding for uniformed military personnel. Soldiers board before all other passengers, including first-class passengers, the disabled, and families with infants. The decision copies a longstanding policy of United's merger partner, Continental.

Since the policy change, the FlyerTalk discussion boards for frequent fliers have been hot with a debate about whether this policy is the right one.

Speaking for myself, and very much not on behalf of Budget Travel, I think this policy of early boarding for uniformed military personnel is a bad idea.

Some airlines allow soldiers to board first and other airlines do not. It's a reasonable question to debate whether early boarding is a good idea or not. I'm just presenting one view, of course. Please share your own opinions by posting a comment below.

Like all patriots, I salute our soldiers for pledging their honor and their lives to defend our people and the Constitution. They represent the best of our nation, and they deserve our gratitude. But my friends and family who are service members are also big believers in humility and integrity. Ask them why they serve and they say they are just doing their job. They also value living in a democracy that does not engage in uniform worship or put soldiers on a pedestal above police officers, firefighters, and other heroes.

United and Continental may be honestly attempting to show appreciation to U.S. soldiers by encouraging them to board first. I'm sure for many individual employees at the company it's a policy they're proud of and that is enforced from the heart.

Yet some of us suspect that the airlines have additional motives that may be less patriotic and more business-minded. Maybe the early boarding policy is a public relations move to make other passengers feel sentimental about the airline because of the gesture.

Over at the travel site Upgrdr, Matthew, a former member of the Air Force and a current frequent flier, highlights a couple of other ways for airlines to show gratitude to the men and women who preserve our freedom and safety:

2. Coax passengers into donating some of their frequent flier miles to a program that gives free tickets to military personnel who were injured in Iraq. The Hope Miles program is run by Fisher House and authorized by the Department of Defense. US Airways is one of many airlines that suggets passengers donate their miles to the program.

I also realize that the U.S. military is one of the biggest customers of both United and Continental because of those airlines' large route networks and longstanding ties. The airlines may want to treat their biggest customer especially well to make sure they continue to earn the military's business. But wooing government business could be done in other ways than having uniformed service members board planes first.

One option: Let all active duty service members and their dependents traveling with them qualify automatically to receive the first seat upgrade available on a flight, as spacing permits, ahead of high-status members of frequent flier programs. In that way, airlines could give support to our armed forces without making a big show of it before crowds of passengers. The recent decision by many Delta, American, and other airlines to relax their checked-bag rules for service members is another example.

But what do you think? Is it a good idea for the military to board planes before all other passengers? Please sound off in the comments.

Is it cheaper to fly or drive?

Renting a car? Beware of getting gouged on gas prices

Wheel Deals: Alternatives to Renting at the Airport