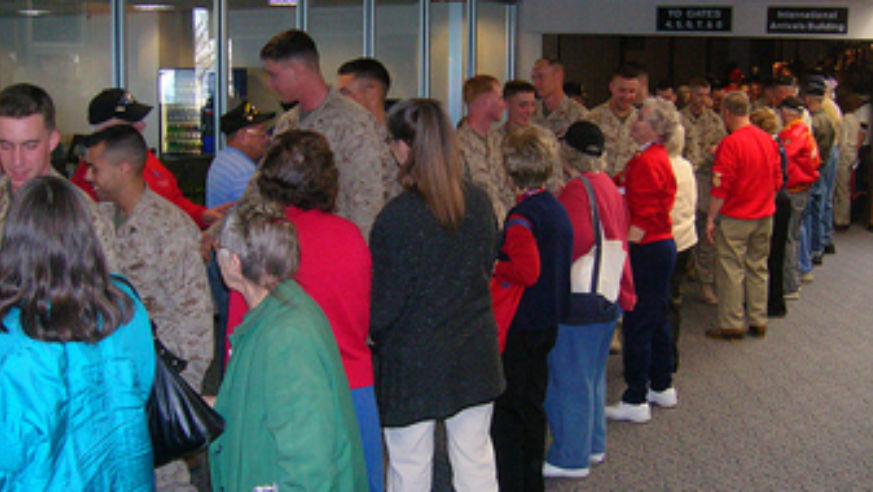 Last week, the House of Representatives voted unanimously in favor of a preference system for the Armed Forces at public airports.

Earlier this year, when United joined its merger partner, Continental, in allowing uniformed military personnel to board planes first—before, even, first–class passengers, disabled passengers, and families with infants—the news sparked a passionate response on our blog, with most comments in favor of the measure.

Last week, the House of Representatives went a step further in helping to ease travel burdens for our servicemen. Members voted unanimously—404 to 0—to allow military travelers on official duty to move through airport security checks faster.

According to the chief sponsor of the bill, Representative Chip Cravaack of Minnesota, that could mean troops not having to remove their boots, belt buckles, military jackets, and medals. Soldiers could be moved to the front of the security line, or a separate line could be created. "The main emphasis is expediting troops through a security process that wasn't made for them," Cravaack told the Associated Press.

In the end, Homeland Security would establish the specific rules of the proposed preferential system. The legislation is now in the Senate. If it becomes law, the earliest recipients would most likely be troops returning home from Afghanistan in 2012, along with their family members, who also would get preferential treatment.

So far, the move has earned raves from travel–industry groups.

Already, the government has initiated a more intelligence–driven screening process for civilian passengers, allowing members of some frequent–flier programs to voluntarily register information about themselves ahead of time for expedited security screening. The new process is currently being tested at major airports in Atlanta, Detroit, Miami, and Dallas and will likely expand nation–wide in 2012.

Echoing these moves, some supporters of the new House bill are advocating for these new, eased airport–security screening privileges to extend to law enforcement officers and firefighters, too.

What do you think? Should policemen and firefighters be allowed to pass through airport security more quickly than other passengers, alongside members of the military?