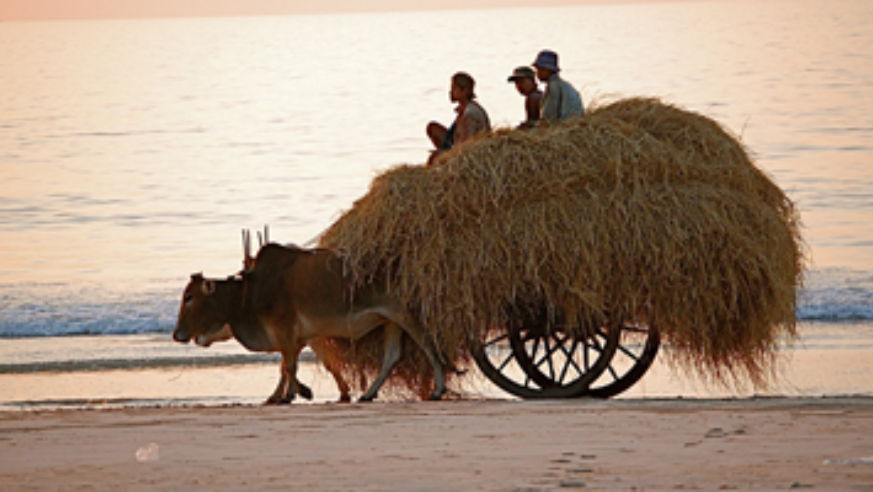 Courtesy donutdollie/myBudgetTravel
An ox cart on Myanmar’s Ngapali Beach, on the Bay of Bengal.

We’re sometimes so quick to call a travel destination "a land of contradictions," the phrase has all but lost its meaning. Except, maybe, where Myanmar is concerned.

Never heard of Myanmar? Maybe that’s because the country of about 48 million is also—and better—known as Burma. Don’t know where it is? Look in South Asia between the Bay of Bengal and China. Why should you consider traveling there? Gorgeous empty beaches (such as Ngapali, on the Bay of Bengal), boutique hotels, and a welcoming Buddhist culture that prizes civility and devotion.

And that’s where Myanmar’s big contradiction comes in. Until recently, its peaceful population was ruled by a military dictatorship that suppressed free speech and political opposition, jailing more than 1,000 dissidents and opponents. Since 1990 the U.S. has had no ambassador to Myanmar, and the country’s pro–democracy leaders urged an international travel boycott. But things are changing fast. In response to economic sanctions and regional pressures, Myanmar held elections in 2010 and its first civilian president took office last year. Hundreds of political prisoners have been released and parliamentary elections are scheduled for April 1.

In January, the U.S. restored full diplomatic ties to Myanmar. The move was seen as a reward for the country’s strides toward a freer society. Secretary of State Hillary Rodham Clinton paid a visit in December—the first by a senior U.S. official in 50 years—and U.S. Congressmen and diplomats from Western Europe are now regularly traveling there. On the other hand, despite the thaw in relations, the U.S. still insists that Myanmar’s 2010 elections were neither free nor fair, and an ethnic civil war rages in the northern hills, where Burmese soldiers fire mortar rounds on villages and burn and loot homes.

Does the restoration of full relations with Myanmar mean you should consider it as a travel destination? In 2010, while the travel boycott was still in effect, only about 16,000 U.S. citizens traveled there, according to Myanmar’s Ministry of Hotels and Tourism; travel–industry attention and anecdotal evidence from package–tour companies such as Friendly Planet and General Tour World Traveler suggest that that number will rise. (Twelve–day package tours that include airfare can be had for less than $3,000).

Last December, after Secretary Clinton’s visit, This Just In asked “Would You Go to Myanmar?” Now that full diplomatic relations have been restored, are you any more likely to go?