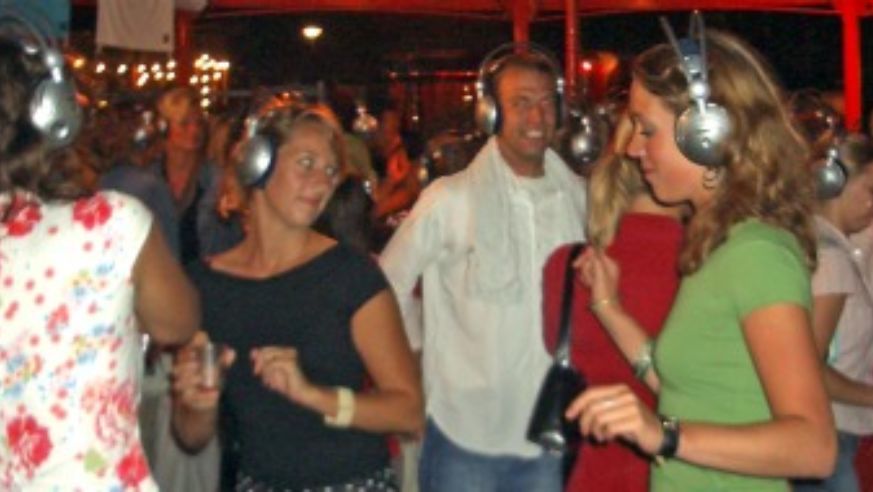 A quiet storm in the nightlife scene is gaining mainstream attraction.

A silent disco is a dance party where clubgoers don cordless headphones and tune in to a live broadcast from the DJ booth. Stumble upon a silent disco, and you'll feel weird. Everyone is dancing, yet you can't hear the music.

Silent discos were invented in 2005 at the British Glastonbury Festival. It was a case where the old saying—"Necessity is the mother of invention"—rang true. Event organizers were worried about upsetting local neighbors with loud bass, so they passed around wireless headphones to share music in certain circumstances.

Silent disco debuted in the U.S. in 2006 at Tennessee's Bonnaroo Music & Arts Festival. It was a late-night alternative, allowing some people to keep dancing while campers could sleep in peace nearby. But it's only in 2011 that silent discos have gone mainstream, thanks to the equipment becoming easier to buy or rent. (Each headset and wireless transmitter costs about $35 to buy.)

In late October, JetBlue hosted a silent disco at its JFK terminal in New York City. Around the same time, London's giant neo-Ferris wheel, the Eye, became a spinning silent disco, filling the pods with DJs and giving visitors a chance to listen to their beats via headsets. The London Zoo has gotten in on the act, too.

To find venues at your next getaway, do an Internet search for your destination's name and the phrase "silent disco." For example, in San Francisco there's a frequent Silent Frisco party. Events are upcoming in Atlanta on Nov. 19, Memphis on Dec. 3, and Lexington, Ky., on Dec. 10.

It's not every day you can quote Friedrich Nietzsche on a travel blog: "And those who were seen dancing were thought to be insane by those who could not hear the music."

In other words, partying in silence has never been so cool.

14 Ways to Survive a Holiday Flight