The first peak-to-peak gondola in North America opens at Whistler Blackcomb Resort in British Columbia, Canada, on December 12. Its 28-person cabins will zip 2.73 miles from Whistler Mountain to Blackcomb Mountain in 11 minutes—saving skiers valuable time that they can use to tackle over 8,000 acres on both mountain faces.

The aptly named Peak 2 Peak gondola operates at a record breaking white-knuckle height; it's suspended 1,427 feet above the valley floor. Daily lift tickets, which include rides on the gondola, start at $66 (U.S. dollars), depending on the time of year.

Jackson Hole Mountain Resort has also been thinking big and will unveil a faster, spiffier aerial tram (the TramFormation, nicknamed the "Big Red Box") on December 20. It will transport 100 people from Teton Village to the summit of Rendezvous Mountain in nine minutes. That's 50 people and one-and-a-half minutes better than the original tram, which closed for renovations in 2006.

From the top, a staggering 10,450 feet above sea level, thrill-seekers can ski one of the largest vertical drops in the United States: 4,139 feet down snaking black-diamond trails.

The tram is imprinted with Wyoming's iconic silhouette of a bucking bronco, and it has large glass walls on all sides that offer dramatic views of neighboring Grand Teton National Park. An $82 lift ticket gives skiers unlimited access to the new tram, all the slopes and lifts for the day, while a $20 sightseeing tram ticket lets non-skiers scope out the magnificent views. 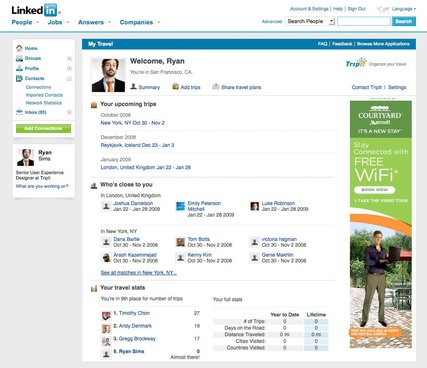 It looks like we're not the only fans of TripIt.com. LinkedIn.com, a networking site for professionals, has just launched a partnership with the free online travel organizer. As of this morning, LinkedIn members will be able to add a TripIt application to their profiles; anytime they want to share information about a trip they're taking, they can just add the info to the TripIt app. The advantage? Assuming a good chunk of your LinkedIn network adds the TripIt application, too, you'll be in tune with where and when everyone you're connected to is traveling. That way if you're planning a trip to, say, San Francisco, and you find that a few of your LinkedIn connections will be there at the same time, you can arrange to meet. Both TripIt and LinkedIn appeal to business professionals, so the companies see this primarily as a way to stay connected within your professional peers. But we think the application is just as valuable for leisure travel. Sure, your LinkedIn network might consist of people within your field, but chances are, a lot of those people are also your friends. As has always been the case with TripIt, when you upload a trip, you can choose whether or not to make it available to the public. In other words, if you don't want your colleagues knowing about your trip to Vegas this weekend, you can choose to keep that one under wraps. EARLIER Our earlier TripIt review

Paris: Love and shelter for less than 100 euros

Paris is known for its palace hotels&mdash;dens of luxury that conjure up an earlier empire and carry price tags upwards of &euro;800 ($1000) per night. Of course, not everyone wants to roll like Marie Antoinette, and many travelers would rather have Google Talk (with Internet-based phone calls) than a gilded chandelier. In 2008, the hotels grabbing headlines don't have heated marble floors. They have iMacs, MP3 players, and graffiti artist design. They're also priced (gasp!) under &euro;100 ($125). Here are two of my favorites: H&ocirc;tel AmourFun, funky and entirely free of frump, the twenty rooms at H&ocirc;tel Amour are among the most hyped in Paris. Each one has a unique design&mdash;there's a surreal storybook in 202, a sex-disco in 401, and 204 is entirely covered in leather. Graffiti artist (and hotel partner, along with nightlife scion Thierry Costes) has filled 405 with compromising images of Batman and Robin. This signature room is more expensive, at &euro;150 ($186) per night, but other rooms start at only &euro;90 ($112). In addition to eye-popping design, they all have the same comfy mattresses you'll find at the H&ocirc;tel Ritz. In trade, the hotel has ditched the TV and telephone, assuming that their clients have a Blackberry (or at least some mobile phone) and better things to do&hellip; like hanging on the fashion-haunted outdoor terrasse. 8 rue Navarin, 9th arrondissement, 011-33/1-48-78-31-80 Mama Shelter This hotel is the newborn love child of interior design star Philippe Starck, French philosopher Cyril Aouizerate, and the founder of Club Med. With its iMacs and Superman-shaped lamps, Mama Shelter appeals to a young and tech-savvy clientele. Rooms start at only &euro;79 ($98), leaving plenty of cash for nocturnal fun. Just downstairs, the hotel bar is already pulling a crowd with its creative cocktails, and the neighboring Fl&egrave;che d'Or is one of the city's best venues for live rock and electro. Hotel guests even get to jump to the front of their line for live shows. 109 rue de Bagnolet, 20th arrondissement, 011-33/1-43-48-48-48, mamashelter.com MORE FROM BUDGETTRAVEL.COM Paris at a Price That's Right

What happened to the ordinary hotel concierge? Westin Hotels have "running concierges;" London's Milestone Hotel has a "pet concierge;" and the new 117-room Good Hotel in San Francisco is debuting the "philanthropy concierge." Living up to its name, the completely renovated hotel in the SoMa (South of Market) neighborhood offers guests immediate access to local volunteer opportunities via a dedicated phone in the lobby. On the other end of the line, One Brick, a local non-profit, acts as a personal voluntourism guide, presenting a menu of opportunities for visitors to help the city during their stay. Guests can find a task that suits their interests, with options such as planting grass and flowers around the San Francisco Bay or sorting food with Feeding America. The management company Joie de Vivre also stocked the hotel with furniture constructed from reclaimed materials&mdash;including headboards made from 100 percent reclaimed wood, lamps made from recycled water bottles, and a table made from skateboards. Plus, with doubles from $89/night (including Wi-Fi access), it looks like the hotel is shaping up to be a pretty good deal. MORE ON BOUTIQUE HOTELS IN SAN FRANCISCO Fill out an online quiz at Joie de Vivre's website, and it'll suggest which one of its roughly 30 hotels may most closely match your personality. Curious about the neighborhood where any hotel is located? Then watch one of the site's professionally produced videos about local attractions. Want to make a friend of a fellow traveler? Then look through the profiles of other guests who have visited the hotel. 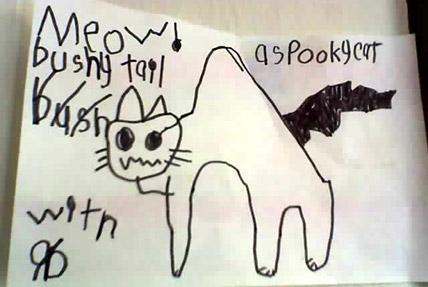 The Great Pumpkin of Halloween roundups