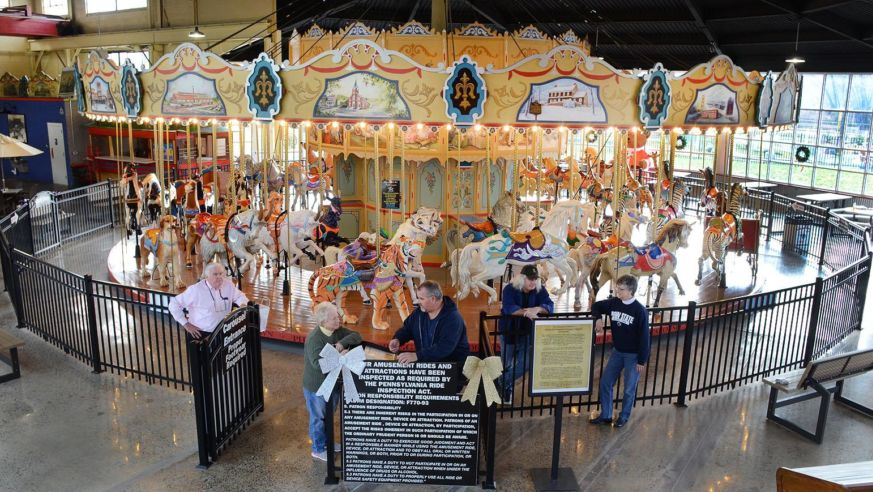 We love the beautiful new carousel in historic Pottstown, Pennsylvania, where a ride will set you back only $2!

It’s no secret that Budget Travel loves small-town America. Our annual Coolest Small Towns contest has celebrated 110 exceptional communities around the U.S. over the past 11 years, and we’re always on the lookout for “small-town must-sees.”

Our latest must-see is the newly opened carousel in Pottstown, Pennsylvania, a historic town on the Schuykill River about 40 miles northwest of Philadelphia. Offering $2 rides, the carousel is a beautiful example (literally and figuratively) of what a community can accomplish when it works toward a common goal.

Pottstown’s carousel is a large-scale lesson in “reuse, recycle”: The building that houses it was once home to Pottstown Metal Weld and has been renovated to play host to the spectacular Derek Scott Saylor Memorial Carousel, which itself is a rebuilt retro gem dating back to 1905. The carousel’s animals were hand-carved at cost by Ed Roth, a Disney carousel carver, and were painted by volunteers over the course of several years. Pottstown defrayed the cost of the carousel by seeking out sponsorships ($4,000 per animal) and holding a variety of fundraising events. And for those who might see a community carousel as an exclusively “feel-good” venture, those involved in the project note that the carousel, initially valued at about $25,000 prior to renovation, is now worth more than $1 million.

The new carousel is part of Pottstown’s Tourism & Recreation District (or TREC), which includes a wide array of cool attractions such as the Colebrookdale Railroad’s Secret Valley Line, the Schuykill River Trail, and the Schuykill River Heritage Area’s “River of Revolutions” exhibit. (Pottstown's proximity to Philadelphia, the birthplace of American independence, makes the town an absolute feast for history buffs and students learning about our country's founding.)

I’d like to thank my friend Evan Brandt, from the Pottstown Mercury newspaper (pottsmerc.com), for bringing the awesome carousel to our attention. Got a small-town must-see to recommend? Email us at info@budgettravel.com!