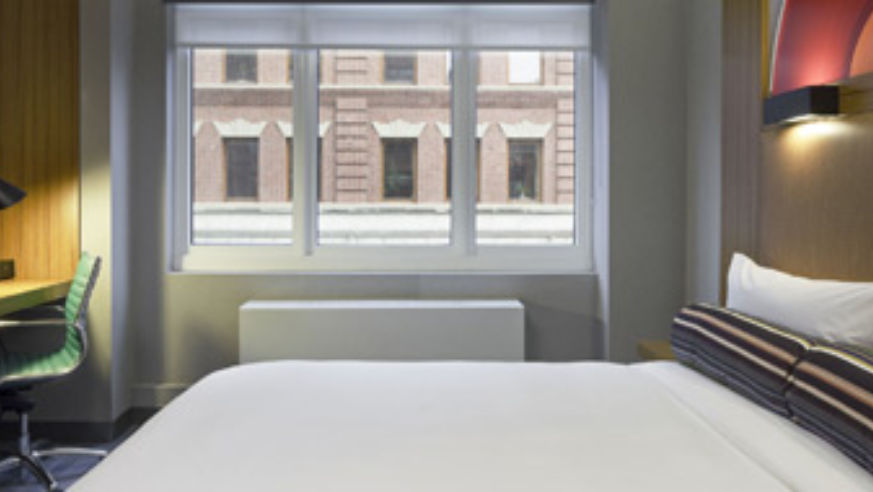 Courtesy Aloft
One of 124 rooms at Aloft Harlem, available as of Dec. 2.

Finally New York is getting its own Aloft hotel. You know, that chic, affordable brand from the folks behind W. Not only it is the fastest hotel roll out in history, with more than 40 properties opened in two years, but Aloft also gotten attention for its modern design sensibility and cutting-edge technology.

Nearly a century has passed since Harlem got a new hotel, which makes this opening especially noteworthy. Aloft Harlem has high hopes to fill a need for visitors while also winning over residents. The hotel held a casting call over the summer at the Apollo Theater to recruit employees with personality. And earlier this week I stopped by for a media preview—catered by nearby soul-food institution Sylvia's and held in the slick lobby bar and lounge.

Aloft Harlem will be easily recognizable to fans of the brand. The 124 rooms, with either a king or two queen platform beds, have striped pillows and window shades, cork headboards, nine-foot ceilings, 42" flatscreen TVs, free Wi-Fi, numerous outlets, and Bliss Spa products. Bathrooms are equipped with refillable dispensers instead of throwaway plastic bottles, and a mini-fridge replaces the traditional mini-bar.

The ability to choose your own room when checking in at lobby kiosks has also set Aloft hotels apart. Lately, the brand has been working to streamline the arrival process further. Guests can choose to participate in a pilot program—already underway at the Aloft Lexington and available next in Harlem—for keyless check-in. Here's how it works. You join the free Starwood Preferred Guest program and receive a special card with radio frequency identification (RFID) technology. On the day of arrival, you get a text message with your room number, and then you can head straight to your room and unlock the door using your Starwood card.

When Brian McGuinness, the SVP of Specialty Select Brands, took me up to see a room at Aloft Harlem, he demonstrated the RFID technology by opening the door with his card. No need to wait in line or keep track of disposable hotel keycards.

Room rates start at $239 for December, and McGuinness told me they will then drop to around the $175 to $200 range (Aloft rooms generally average $125 a night). From now through March 31, 2011, guests who book a stay at Aloft Harlem will earn double Starwood Preferred Guest points and a $20 voucher redeemable at the hotel's bar or grab-and-go pantry.

The hotel is part of a 12-story, mixed-use building with condos and retail at 2296 Frederick Douglass Blvd. It's just south of bustling 125th St., where you can catch many subway and bus lines. The Apollo and the Studio Museum are within a few minutes' walk. Our profile of Harlem Hotspots includes Ethiopian restaurant Zoma, just down the boulevard.

While the phrase "up-and-coming" hasn't been tossed around as much to describe Harlem since the recession hit, Aloft is clearly betting on a neighborhood renaissance. Chef Marcus Samuelsson is also embracing Harlem; his soon-to-open Red Rooster at 310 Lenox Ave., near 125th St., has been getting at least as much buzz as Aloft. In addition to serving his unique spin on American comfort food, the 3,400-sq.-ft. space will include a grocery store and a basement level for live music and cooking demos.

Samuelsson now lives in the area, and in a video clip for Black Atlas, he stops in to chat with locals including the chief curator of the Studio Museum and the owner of 67 Orange Street, one of a few sophisticated cocktail and wine bars along Frederick Douglass Boulevard.

Check out Samuelsson's video after the jump—it makes a nice introduction to the look and feel of Harlem.

RELATED Looking to stay elsewhere in the New York area? Aloft Brooklyn is slated to open in January 2011. And find out why Jersey City can be an appealing option.