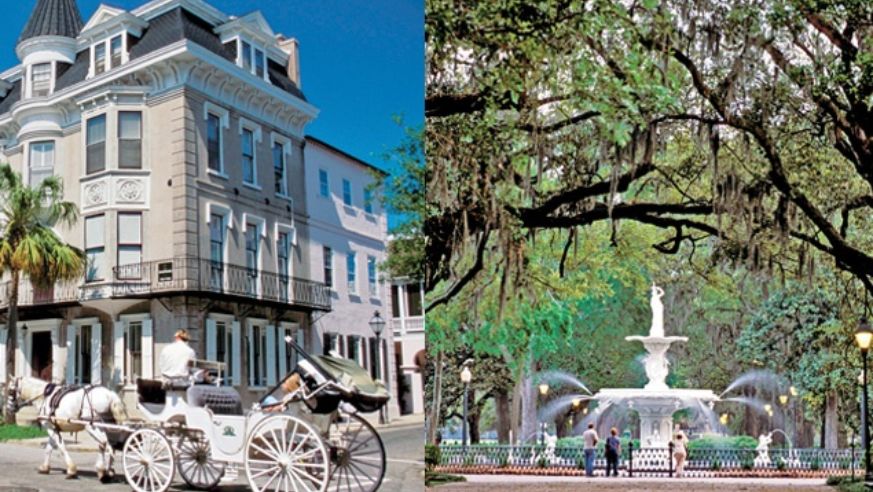 We pitted two of the most popular southern cities against one another to see which one would come out on top. We compared all of the things that give a city personality: boutique shopping, culture, creative cuisine and that special, indescribable feeling that makes you want to come back time and time again. Our conclusion? Each place has its own special appeal. Depending on your interests you'll gravitate to one or the other—keep reading to find out which one belongs at the top of your list (and what to see once you're there).

Founded in 1733, Savannah has numerous claims to fame: it was the birthplace of the Girl Scouts, the setting for John Berendt's Midnight in the Garden of Good and Evil, and is home to Paula Deen's The Lady & Sons Restaurants. It's sometimes called the Hostess City of the South and the Creative Coast for its cultural attractions and architecturally significant buildings, including 18th- and 19th-century mansions, from stately Federal to the more ornate Queen Anne, Greek Revival, and Italianate. The city has a population of 136,256.

URBAN EDEN
Four of Savannah's 22 public squares date to the city's founding, but only one feels brand-new. Buried under a parking garage for 50 years, Ellis Square was restored in 2010 as a sleek plaza with an interactive, kid-friendly fountain. In a town known for its haunted inns and cemeteries, why shouldn't a park have an afterlife? Barnard St. between Bryan St. and Congress St.

RETRO EATS
Even queues around the block won't keep fans from dinner at Paula Deen's The Lady & Sons. For dessert, follow another Deen cue and head to Back in the Day Bakery, where Paula says the old-fashioned cupcakes taste just like her grandmother's (or try nostalgic Southern staples, such as red velvet cake or banana pudding). 2403 Bull St., backinthedaybakery.com, cupcake $3.

ART HISTORY
Savannah has been a regional art hub since 1886, when the Telfair Museums opened as the South's first art museum. Admission includes entry to the original building, as well as the Jepson Center for contemporary art and the Owens-Thomas House decorative-arts gallery. 121 Barnard St., telfair.org, admission $20.

WHERE TO STAY
Built in 1851 as the city's first hotel, The Marshall House doubled as a hospital for Union troops during the Civil War. The property was renovated in 2008, but it still retains its green shutters and charming wrought-iron veranda. 123 E. Broughton St., marshallhouse.com, from $119.

Charleston was founded in 1670, more than half a century before Savannah. Sometimes called The Holy City for the prevalence of churches found here (over 400 in total), the city is also known for the Charleston single house—a unique local style that is only one room wide, often pastel-hued, and famed for its two-story porch. If the town looks familiar, it may be because it was the setting for the film Porgy and Bess. Two things every visitor should sample here: she-crab soup and the potent Planter's Punch. The city has a population of 120,083.

MARKET MAKEOVER
A three-year, $5.5-million renovation has left Charleston City Market feeling more like a boutique than the tourist trap it once was. It's still a go-to spot for classics like benne (sesame) wafers and sweetgrass baskets. 188 Meeting St., thecharlestoncitymarket.com, wafers $5.

HOME COOKING
It's no secret that Charleston is a hotspot for African-inspired, seafood-rich Lowcountry cuisine. Now the city is also a hub of New Southern dining, thanks in part to chef Sean Brock's restaurant Husk. The James Beard Award winner promises that every ingredient—from Tennessee truffles to Texas olive oil to South Carolina oysters—hails from the South. 76 Queen St., huskrestaurant.com, oyster stew $12.

HISTORY
No self-respecting history buff would miss Fort Sumter, where the Civil War's first shots were fired. But don't skip Fort Moultrie, which guarded the city from 1776 to 1947. Its original palmetto-log walls were so powerful, they earned the tree its spot on the state flag. 1214 Middle St., Sullivan's Island, nps.gov/fosu, $3.

WHERE TO STAY
Located about a half hour from town on the Ashley River bluff, The Inn at Middleton Place is a minimalist gem with floor-to-ceiling windows and cypress paneling. Stays give you access to the on-site 1755 plantation house and America's oldest landscaped gardens. 4290 Ashley River Rd, theinnatmiddletonplace.com, from $129.