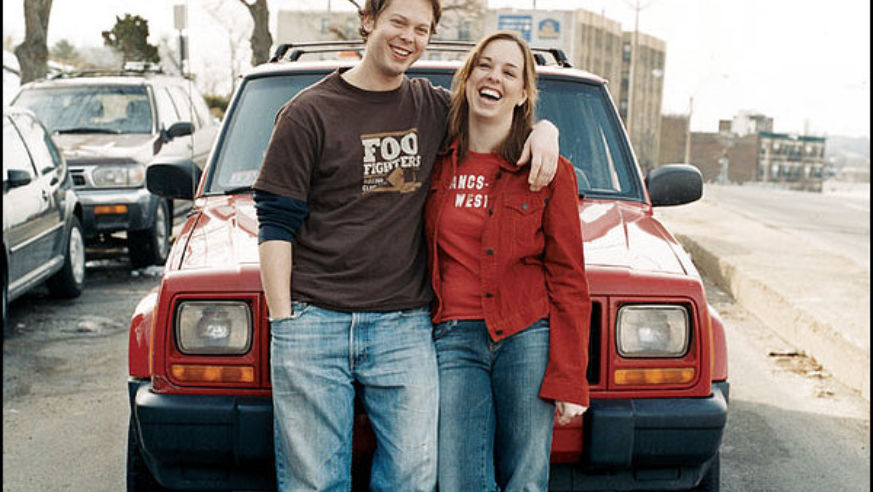 A couple from Boston is psyched for their big drive--but with so many quirky sights on the way, what's the rush?

For most people, moving to another city equals stress. For Lisa Levine and her boyfriend, John Craig, it means adventure. Before relocating from Boston to Los Angeles in April, they're going to see the country.

John, a 30-year-old film school grad, is leaving his gig as a waiter at a fine restaurant to try and make a living doing what he loves best--acting--in L.A. Lisa, 32, is likewise following her dream of working with animals, as well as basking in southern California's great year-round weather. She's quitting her job in human resources to become a dog trainer, specializing in positive reinforcement. The couple met in Aspen seven years ago watching a local band. They have a shared passion for music, food, drink, the outdoors, and of course, travel--with trips to Moab, the Grand Canyon, Las Vegas, northern California, and the southeastern U.S. already under their belts. "We've driven cross-country before, but never the southern route," says Lisa. "We were hoping that you could point out some hidden gems along the way--a place we didn't know was there, the best local cuisine in Tennessee, or something like that."

Some days they'll do nothing but drive; other days they'll put in six hours at the wheel and six hours having fun; still others, they'll simply kick back. They're interested in a few cities in particular--Memphis, Austin, and Santa Fe--which gives the trip a basic structure, but they're not locked into a specific itinerary. "I like the fact that it's not a tour we have to stick with," says Lisa. "We're up for whatever."

If we planned out all the cool stops across the land, they might not get to California until June. So for their three-week trip, we're focusing on a few key places that they've never been, starting with Kentucky. John and Lisa can find inspiration for their big move and lifestyle change in Louisville at the brand-new Muhammad Ali Center, dedicated to the man known as much for following his ideals as he is for being a great athlete. For a true taste of the state, they could visit Louisville's Brown Hotel, where the gluttony-inducing "Hot Brown" was invented in 1923 ($11.50). Sure, the turkey sandwich smothered in Mornay sauce, cheese, and bacon makes fried chicken seem like a light repast, but in this case a full belly might be good. John's favorite drink is bourbon, and his favorite bourbon of all is Jim Beam. The distillery is but a half hour outside the city, and everyone knows about the perils of drinking on an empty stomach.

"We're willing to drive a little out of the way for cool side trips," says Lisa. Bearing that in mind, as well as the fact that Lisa and John mentioned their interest in food time and again, they might not want to take the interstates straight to Memphis. Instead, they should drive along the Western Kentucky Parkway to Princeton, home of Newsom's Aged Kentucky Country Hams--the best hams anywhere outside of Spain. John requests "great hikes with amazing views," and 20 miles north of Princeton, an easy walk leads to Mantle Rock, a 30-foot-high, 188-foot-long natural sandstone bridge.

One big reason this trip is possible is because John and Lisa are selling most of their stuff, particularly furniture. If it doesn't fit into their two cars, it isn't leaving Massachusetts. "We're pretty much going to be traveling with books, CDs, clothes, only the important things," says John, a musician as well as an actor, whose prize possession is a Martin guitar. John should especially dig Memphis. To really put him in a Memphis state of mind, we recommend he read Peter Guralnick's book Sweet Soul Music and pick up a few Stax-Volt CDs for the car.

Lisa likes museums that are "different or offbeat," so if Elvis's memorabilia-strewn racquetball court at Graceland doesn't completely fill the bill, the art, weaponry, and artifacts at the National Ornamental Metal Museum--a perfect picnic-and-sunset spot overlooking the mighty Mississippi--ought to do the trick. For John, the guitar factory at the Gibson Beale Street Showcase is a must. And for the required dose of Memphis barbecue, we suggest Cozy Corner, where they'll get not only the usual dry-rubbed ribs and falling-apart pork shoulder, but also Cornish game hen. There's enough to do in Memphis that they'll want to stay a night or two, and the spacious junior suites at French Quarter Suites come with a whirlpool tub for a mere $89.

Last summer, while dreaming of their cross-country trip, Lisa and John checked off the places they wanted to see, and New Orleans was high on the list. "There has been so much devastation, but we still want to visit," says Lisa. "We're hoping that maybe we could volunteer for a couple of days and help in some way, with animals or people." On Wednesdays and Saturdays, grassroots group Katrina Krewe welcomes volunteers willing to put rubber gloves and garbage bags to use in various neighborhoods. Contacting the organization ahead of time is a good idea. The city's needs change from day to day, so John and Lisa should remain flexible and proactive in seeking out volunteer opportunities. Another contact is Best Friends Animal Society, an organization that links volunteers to local outfits helping pets left without homes after Katrina.

Some of the Big Easy is ready for visitors, so John and Lisa can even be tourists, checking out the Rebirth Brass Band or Walter "Wolfman" Washington at the Maple Leaf Bar, and having a beignet--or three--at Café du Monde. When it comes to accommodations in New Orleans, the options certainly aren't as plentiful as they once were. Vacancy rates and prices are a bit unpredictable, so John and Lisa should absolutely book in advance and not be picky; neworleanscvb.com lists "rebuilding status" among the hotel features.

"I don't necessarily need to spend a ton of time in Texas," says Lisa. "I'm curious about Austin and the desert and really good barbecue, but don't need to see Dallas or George Bush's ranch or anything." In that case, the bad news is that there are 800 miles of Lone Star State between Louisiana and New Mexico, so Lisa and John will have to spend a fair amount of time in Texas.

The good news is there's tons to enjoy. Using the Austin Motel as their home base in the state capital, John and Lisa can try migas (eggs scrambled with tortilla chips, $5) next door at El Sol y La Luna and listen to blues or roots-rock across the street at The Continental Club. John says he's an "indie-rock guy," so he should also check the calendar for who's playing at Emo's. The shops at the corner of 6th and Lamar seem right for the couple: Waterloo Records (heard the latest Spoon album?), BookPeople (Karen Olsson's 2005 novel Waterloo defines contemporary Austin), and the flagship Whole Foods Market, where customers gorge on free samples and marvel at the chocolate enrobing station, where workers will cover almost anything requested in chocolate. Lisa enjoys yoga, and she can work out the kinks from too much time in the car at Yoga Yoga, which has four locations in the city, classes almost around the clock, and Yogi Tea so good she'll want the recipe.

Highway 71 out of Austin means bluebonnets, brush, and yes, more barbecue. They'll have to decide between the huge pork chops at Cooper's, in Llano, or the brisket plate, which combines a choice of brisket and one other meat, beans, potato salad, peppers, onions, and bread, at Mac's, in Brady, because few stomachs could handle both. After a long drive through the austere landscape of West Texas, they can reward themselves with wine in...Lubbock? The truth is, there are more than 80 wineries in Texas, and the vintages aren't half-bad. "I always enjoy going to little vineyards and just checking them out," says John. "It doesn't matter if they're not in famous growing areas." Set on the wide-open plains, Llano Estacado is one of the area's most prominent wineries, with daily tours and free tastings.

Continuing on, John and Lisa will head to one of those "hidden gems" that they'd never heard of: Palo Duro Canyon, just outside of Amarillo, is the second-largest canyon in the United States. The couple thought they'd wind up camping at some point on the road trip, and this is as good a place as any; a basic site is $12, and there are miles of hiking trails. After leaving the natural wonder, they should keep an eye out on the left side of I-40 for an unnatural wonder: Cadillac Ranch, built by local eccentric Stanley Marsh and made famous by Bruce Springsteen.

"I love to cook, so a cooking class would be fun," says Lisa. "John, too--he likes to cook, but I usually hog the kitchen." Hopefully they'll be able to share space and work together at the Santa Fe School of Cooking, where the Chile Amor class introduces students to all things red and green, plus tortilla making. John should be able to fulfill Lisa's wish for "cute but not too expensive clothes" by getting her something in Santa Fe at Double Take, a hip consignment store.

John and Lisa are intrigued by the groovy vibe surrounding Sedona, Ariz., though they're not sure they'll have time to visit. Just in case, we refer them to the comprehensive feature story on the town in last June's Budget Travel, available in our archives at BudgetTravelOnline.com. After a stop at Lisa's father's home near Kingman, Ariz.,the couple will be just five hours from Santa Monica. To finish the journey, we recommend a nice, long walk on the beach to stretch their legs.

After a long couple of weeks on the road, John and Lisa will certainly be ready to unwind. Thanks to a gift from Ojo Caliente Mineral Springs spa in New Mexico, they're being treated to one night's lodging and access to several hot springs, including a private, clothing-optional pool. Go on--nobody else can see.

"Europe was brilliant!" says Beth Hicken, pictured in Tuscany with Sara Murdock; we coached the two Idaho firefighters in November. "We followed your advice and remained flexible, and everything turned out practically perfect."