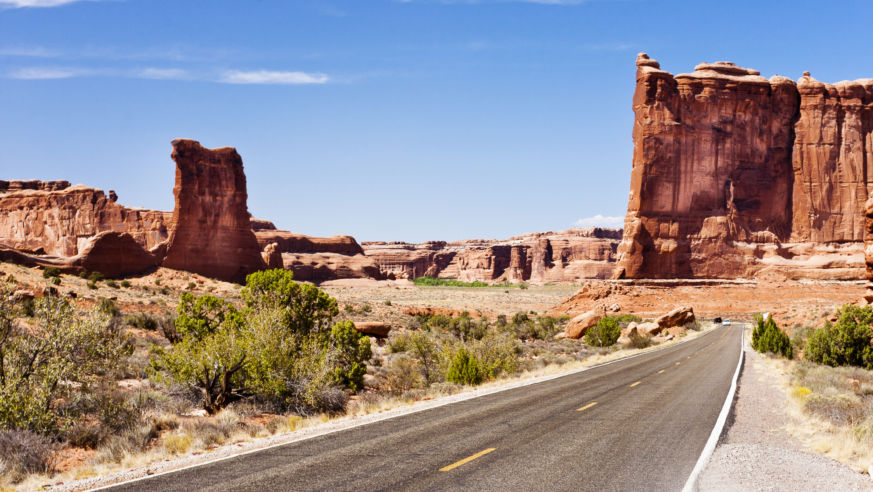 The southern half of Utah feels like a time warp—thanks to the prehistoric rock formations at five absolutely breathtaking national parks.

Cramming five national parks into four days isn't for everyone. But if you are going to attempt such a quest, Southern Utah is the place to do it. Five of the nation's most gorgeous parks are packed into 650 miles of high desert. Bryce Canyon and Zion are both justly famous; so are the sandstone bridges in Arches National Park. Less well known are Canyonlands, every inch as impressive as the Grand Canyon, and Capitol Reef.

Sure, attempting five parks in four days was ambitious. Not to mention the fact that my friend Stew and I did it at the very chilly start of spring, in part to beat the crowds. But over the years, we've climbed mountains together. We've traveled through the hinterlands of eastern Cuba. We've even taken a troop of Boy Scouts on a three-week tour of Europe.

In other words, we can't resist a challenge.

Less than 90 minutes after landing in Grand Junction, Colo., we made it to Moab, Utah, a laid-back city wedged between Arches and Canyonlands. We had booked a mountain-bike ride north of Moab leading to a panorama of the desert from the northern end of Arches National Park. We'd have to grind 700 vertical feet up slickrock, a bald sandstone which, despite the name, is remarkably grippy.

Our guide, from Rim Tours, was a lean young dude called Goose. Nine years ago, he left his home in Ohio, as well as his full name (Mike Gostlin), to guide rafting and biking trips in Colorado and Utah. Goose rode a one-gear with no shocks. Stew and I were on state-of-the-art mountain bikes with fast shifting and full suspension. Not that it helped. Five minutes into the ride, I was gasping for air, pushing my jelly legs to propel myself up a four-mile-long rock ridge.

All I could think was, Thank God for dinosaur prints. The three-toed impressions appeared every 50 yards, and each was surrounded by a circle of stones to keep people away. I disembarked to examine every single one. After the ninth footprint, Goose saw through my sudden interest in paleontology. The ride down was much easier.

Stew and I then drove into the popular southern end of Arches. Families piled out of minivans and trotted along trails to view aptly named geological formations such as Balanced Rock and Double Arch. By late afternoon, we were over the pain of the bike ride enough to do a 3/4-mile hike up to a view of Delicate Arch, a 45-foot-tall horseshoe of orange and red sandstone.

We raced the setting sun as we looped up Highway 191 and then down Rte. 313 into Dead Horse Point State Park, at the northern corner of Canyonlands. The main overlook at Dead Horse Point also offers a view of Canyonlands. The muddy Colorado River snakes in from the left in wide, lazy curves. We got there just in time to catch the last bit of daylight.

Our hotel's best feature was its location--right behind Moab's oldest microbrewery, Eddie McStiff's. The bartender plunked down a basket of tortilla chips and some tasty salsa--for 69¢--to accompany pints of the brewery's own Sky Island Scottish Ale, Cisco Bend Stout, and Rock Amber Ale.

The largest of the five national parks at 527 square miles, Canyonlands is divided into three sections. Stew and I had gotten a quick look at the northern Island in the Sky section yesterday at sunset, and we wanted to see how the southeastern section, Needles, compared. (Reaching the westerly Maze section involves 46 miles of dirt road just to get to the ranger station; maybe next time.) The road into Needles ascended to the Big Spring Canyon Overlook. Whereas Island in the Sky was all grand, wide canyons, Needles felt more intimate. Pygmy juniper trees decorated the ground, and hundreds of layers of sandstone fanned out in phyllo-like sheets. Newspaper Rock was on the way back to the main road. The black stone is covered in petroglyphs that were scratched over a 2,000-year period by native tribes (Anasazi, Fremont, Paiute, and Navajo). It was an impressive collage of images: men on horseback hunting antelope, oversize gods sprouting horns and antlers.

We stopped for lunch at Twin Rocks Café in the one-road town of Bluff. The Navajo fry bread was crispy, puffy, and wonderfully greasy, and a platter of mesquite-smoked barbecued pork ribs and brisket was huge and satisfying. A sign past the town of Mexican Hat announced that we were now in "Navajoland," the Native American reservation, which sprawls across southern Utah and northern Arizona. The only real detail our map showed was a dot labeled Goulding, just north of Arizona. It turned out to be Goulding's Lodge & Tours, a complex with a lodge, museum with memorabilia from movies shot locally, and outfitter that runs tours of the reservation. In an air-conditioned gift shop we picked up some Native American drums and turquoise jewelry.

Stew noticed that the map outlined a little dirt road that headed west, turned south, and rejoined Highway 163 after just a mile or two. Craving a glimpse of the real reservation--anything beyond the gift shop--we took the shortcut.

We immediately spotted a modest home with a dome-shaped ceremonial Navajo mud hut in the yard. Success! Continuing on, we took a left at each fork. But after half an hour had passed with no more signs of civilization, I tossed the map onto the floorboard and declared us lost.

A Navajo couple in a pickup truck gave us some good directions to the town of Blanding, which is along the highway. Our two-hour detour left us short on time, and we still needed to get halfway across the state to Torrey, where I had booked a night at the Cowboy Homestead Cabins. Restaurants were sure to be closed by the time we arrived, so before getting on the road, we made a quick grocery stop. After a good long drive, we checked into our cabin, one of four, and fired up a nearby barbecue. The smell of steaks, pork chops, red peppers, and zucchini lured Greg Daussin, a Utahan from upstate who had been coming here for the past 10 years and was staying in the cabin next door. He and Stew discovered a shared love of rock climbing, and we stayed up until 3:30 a.m. trading climbing stories and slowly emptying the cooler.

Torrey is the gateway to Capitol Reef, the least well known of Utah's five national parks. Route 24 cuts through it, threading a high valley carved by the little Fremont River. I had planned for us to spend only an hour or so at Capitol Reef--just enough time to take it in and move on--but I liked what I saw. The 10-mile Scenic Drive led us to a long wash (a dry canyon that becomes a river after heavy rain). The walls rise hundreds of feet on both sides as the dirt road twists its way through the increasingly narrow canyon. At the end of the road, we parked and continued on foot for two miles. As we walked, lizards scurried out of our path. It was quiet and eerie, like bandit country. I later learned Butch Cassidy and the Wild Bunch used Capitol Reef as a hideout.

From Torrey we wound south on Highway 12, through Dixie National Forest. It earns my vote for the country's most spectacular drive. By the time we reached the summit, the road cut through a forest of tall firs and eight-foot-high snow drifts (at the highest points, the snow can stay through late spring). A span of red and yellow mesas and desert lay below. And that was just the first 20 miles. Descending into Grand Staircase-Escalante National Monument, the road follows the top of a ridgeline in a series of tight curves with drop-offs of more than 1,000 feet on both sides.

Once again, we found ourselves racing the clock, this time to get to Bryce Canyon to see the sunset light up the hoodoos, which are spindly, orange-and-white-striped spires of rock. We missed the natural show at the park's Sunset Point by five minutes. But as the crowds dispersed, a photographer stayed planted. "Wait a few more minutes," he instructed, smiling. "You'll see." Soon enough, the snow between the pinnacles glowed a luminous pale purple.

We'd decided to splurge on Bryce's own historic lodge for a night. Our room was bland, but had a lovely balcony with rough-hewn logs for a railing. Unfortunately, dinner at the lodge was pretty awful. Everything was salty, my salmon managed to be both pink and dry, and by the next morning I felt queasy. Perhaps it was just due to opening-night jitters--we did happen to come on the first day of the season.

At Bryce, the altitude ranges from about 7,900 feet to more than 9,100 feet. With the lingering effects of dinner, I wasn't up for too much activity. So Stew and I drove out to the end of Bryce's scenic road and stopped at each overlook. The best were at Agua Canyon and the rock window called Natural Bridge.

Four parks down, one to go. By the time we got to Zion, we had just enough time to take the park's most rewarding short hike, the half-mile-long Canyon Overlook Trail. Private cars are no longer allowed on the Zion Canyon Scenic Drive north of the visitors center, so after we finished our hike, we caught the free shuttle to the Riverside Walk trail, which leads to the Narrows. The Narrows is a 16-mile trail that doubles as the bed of the Virgin River. (Only the first mile is accessible without a permit.) Hikers have to check with the visitors center before setting off, as flash floods can send a wall of water racing down the trail, between the 2,000-foot-high canyon walls.

Attempting the Narrows at twilight was our final act of ill-advised bravado. We made it only around the first bend before the frigid water rose to our knees. We snapped a couple of quick pictures for bragging rights and hightailed it back to the car.

Down the road from the park gates, we checked into a spacious cottage at the Canyon Ranch Motel and immediately headed for the outdoor hot tub. Fifteen minutes of soaking restored our circulation. We then finished off the evening with some of the best Mexican food I've ever tasted in the States, at the Bit and Spur Restaurant and Saloon. We ordered potato, poblano, and chorizo soup, and a couple of sweet potato tamales topped with shredded pork and salsa.

The next morning we zipped back across the state. And as we neared the border, a flock of tumbleweeds playfully chased our car toward the state line of Colorado.

This trip can just as easily be done in reverse by flying into Las Vegas, a two-hour drive from Zion. The parks are open year-round, but outfitters and most lodges are only open for business April through October. Early spring and early fall are the best times to beat the crowds. And even though this is the desert, it's the high desert: Daytime temperatures in the 70s plummet to the mid-30s some nights, and there's still plenty of snow at higher elevations. To save money on entrance fees, consider an annual National Parks Pass. It's only $50--$15 less than the total cost of the entry fee