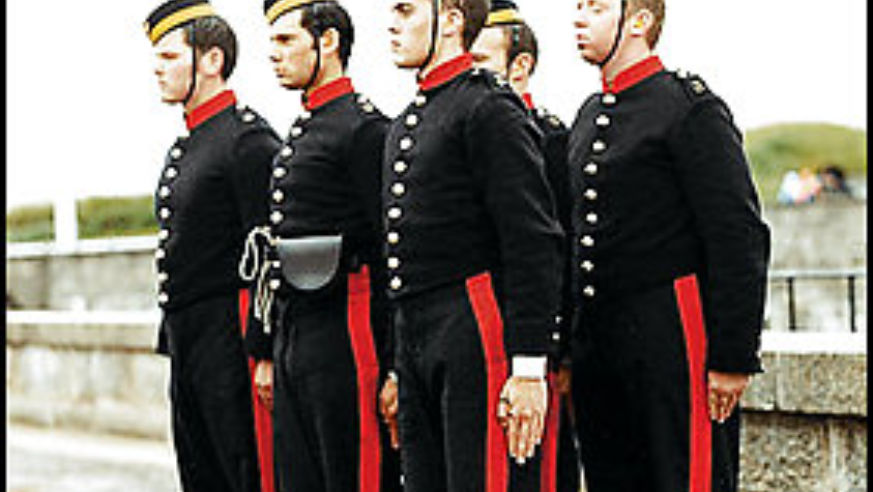 Lorne Bridgman
Cadets at the citadel

At the hilltop Halifax Citadel, a crowd is gathered to witness a ritual that has been enacted every day of the year, except Christmas, since 1857. A cannon is loaded with black powder, and a group of uniformed gunners points the muzzle of the twelve-pounder at the harbor. Lance Corporal Roberts, sporting a green kilt and a horsehair sporran, gestures toward a nearby building: "These days," he says, "we don't have much to fire at, but often we like to aim it at the student loan center." The Noon Gun is fired--all sound, no real fury--and the Royal Artillery members (most of them university students) secure the cannon.

For those who don't mind a dose of history with their travel but are allergic to the quaint, Halifax is a welcome bastion of authenticity on Canada's East Coast. The boardwalk has its share of chowder restaurants and street performers, but the harbor--second in size only to the one in Sydney, Australia--is a working port, teeming with trawlers and ferries.

History seems to haunt the city: It's hard to walk a block without hearing a ghost story. "I grew up in a haunted house," says a waiter at the Economy Shoe Shop, as he puts down a plate of lobster flambéed with sherry. "There were all kinds of strange noises--turns out a woman had taken her life there. It stands to reason that Halifax is haunted: There have been so many tragedies here."

He's not kidding. When the Titanic sank in 1912, Halifax was the closest major port, and bodies filled the local morgues. Five years later, a French freighter loaded with a cache of explosives collided with a Norwegian ship in the port. The resulting explosion flattened two square miles of the city, killing close to 2,000 people. A twisted chunk of the ship's rudder is now on display at the Maritime Museum of the Atlantic, along with other macabre souvenirs of Halifax's past.

Ten minutes' drive from downtown, 121 victims from the Titanic lie in the Fairview Lawn Cemetery. On a sloping hill, several rows of gray granite markers are arranged in the shape of a ship's bow. A path through the grass leads to grave number 227, the last resting place of a young coal trimmer named J. Dawson. It's the same name as Leonardo DiCaprio's character in Titanic (which director James Cameron has said is a coincidence).

The ship also has a cameo role at the Halifax Public Gardens, where a model of the vessel floats in a pond. The Victorian gardens are an oasis of Camperdown elms, rhododendrons, and verdigris-coated statues of various fish spitting water into a fountain.

This city of 365,000 may be imbued with the past, but in many ways, Haligonians are right up to date. The city is home to one of the largest groups of Buddhists on the continent. A sizeable black community, some of which is descended from American slaves who fled to Halifax in the late 1700s, nourishes a burgeoning rap and hip-hop scene. The city's six colleges and universities guarantee an audience for such local indie rockers as Sloan and rapper-raconteur Buck 65; Celtic groups regularly play at The Old Triangle Irish Alehouse.

Unsurprisingly for a harbor city, area restaurants emphasize fresh seafood. At The Five Fishermen, the menu features wines from Nova Scotia's Jost vineyard, Digby scallops in a caper vinaigrette, and kettle-steamed lobster. And there's an impressive array of oyster shooters at the Little Fish Restaurant & Oyster Bar. The building was the original home of the Victoria School of Art and Design, founded in 1887 by Anna Leonowens, who was governess to the children of the king of Siam and inspiration for the musical The King and I. It, too, is said to be haunted: There have been sightings of women who vanish when they reach the top of the stairs.

This tidbit comes from Rene Slaney, who leads The Haunted Hike of Halifax. During a three-hour walk through the downtown, Slaney tells stories of pirates, press-gangs, and poltergeists. A highlight of the tour is Holy Cross Cemetery, where the ghost of a groundskeeper killed by a fall into one of the graves is said to leap from behind tombstones on foggy nights.

Slaney also stops outside Halifax's Waverley Inn, a sprawling house where the halls are filled with portraits of dour and deceased Brits (several rooms feature soothing whirlpool baths and four-poster beds). "Guests say they see a gentleman dressed in a long coat pacing in the hall, reading aloud from a book," says Slaney, who wears a buccaneer's cap and an eye patch. "Seems that's the way author Oscar Wilde prepared for his lectures."

Halifax was one of the stops on Wilde's 1882 North American tour. He only spent a few nights here; why his ghost would haunt the Waverley Inn is anyone's guess. Although it does make for a great yarn.