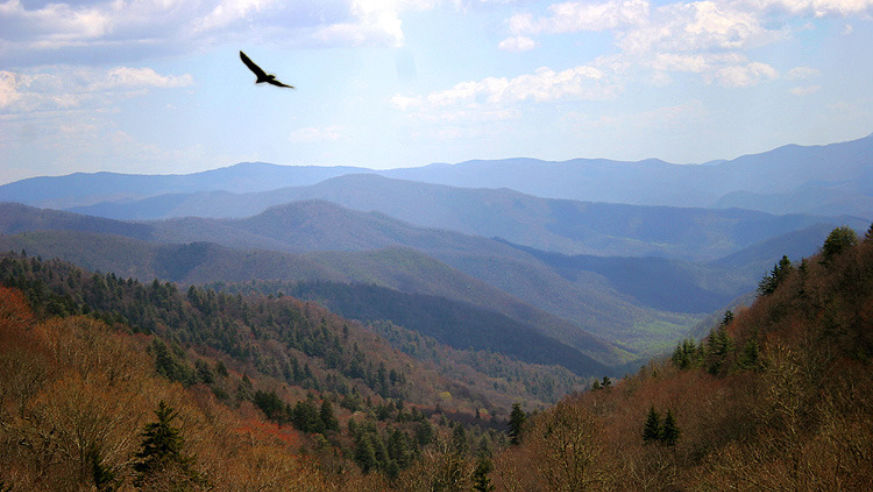 The Great Smoky Mountains are the setting for the annual Bloomin' Barbecue & Bluegrass food festival, one of our can't-miss food destinations for the month of May.

Admit it. The words food and festival make your mouth water.

I know, I know. You're picturing yourself balancing a plate of, say, gulf shrimp with a nice cool glass of local chardonnay. Add a balmy Southern breeze in your hair and you've pretty much got a perfect afternoon. Here, four of our favorite American food festivals coming up in May, served with a heaping side order of affordable hotels.

Bloomin' Barbecue & Bluegrass (May 17 to 18). Sevierville, TN, has a lot going for it. Located in the foothills of the Great Smoky Mountains and a short drive from Great Smoky Mountains National Park and Dollywood, the town is also host to an annual BBQ and bluegrass blast. Here, you'll meet barbeque cook teams who have been featured on the Food Network, free bluegrass concerts (including the Mountain Soul Vocal Competition featuring finalists from around the U.S. competing for a Nashville recording session), and witness an epic cook-off involving more than 2,800 pounds of meat that includes pulled pork, brisket, chicken, and ribs. Where to stay: La Quinta Inn & Suites Sevierville (2428 Winfield Dunn Parkway, Sevierville, TN, lq.com, doubles from $89) is nestled in the Great Smoky Mountains, near Dollywood, Dixie Stampede, and offers a free breakfast.

New Orleans Wine & Food Experience (May 22 to 25). You already know this town knows how to throw a party. Now celebrating its 21st year, the NOWFF will include wine dinners hosted by more than 30 NOLA restaurants, the Royal Street Stroll through the French Quarter, and wine tastings from more than 175 wineries (including food pairings from local chefs). The event will also include the 7th annual Louisiana Seafood Cook-Off, whose winner will represent the state in the Great American Seafood Cook-Off, plus seminars about international cuisine. Where to stay: Holiday Inn French Quarter—Chateau Lemoyne Hotel (301 Rue Dauphine, holidayinn.com, doubles from $167) has a prime central location near Bourbon Street.

Atlanta Food & Wine Festival (May 30 to June 2). The organizers of this fest in Midtown Atlanta like to say "the South never tasted so good," and you'll catch their enthusiasm quickly when you immerse yourself in a lavish extended weekend of learning experiences (cooking and cocktail demos, tasting seminars, and panel discussions), tasting experiences (chef-curated tasting tents serving Southern meals, snacks, sweets, sandwiches, and wines and spirits), plus evening dinners and other events. With an advisory council of more than 60 award-winning food pros from 14 Southern states and the District of Columbia, this festival has an additional "southern" angle—it celebrates the food of other southern regions of the world, including Southern Europe, South Africa, South America, Australia, New Zealand, and Mexico. Where to stay: Westin Peachtree Plaza (210 Peachtree Street, starwoodhotels.com, doubles from $173) is in central Atlanta, near its Museum of Design, Centennial Olympic Park, and a short distance from the outstanding Georgia Aquarium.

Taste of Cincinnati (May 25 to 27). America's longest-running culinary festival, dating back to 1979, this Memorial Day weekend bash celebrates the Cincinnati area's great restaurants and attracts 500,000 foodies each year. More than 40 locals restaurants typically participate, and in the weeks leading up to the event there is a Best of Taste Awards competition in which menu items are previewed and judged. This year's offerings are in the works, but last year's winners included Shrimp & Crab Dumpling with Noodle (deemed "Best Damn Dish" of the year), Fried Peanut Butter & Jelly, and Banana Cream Pie. Where to stay: Wingate by Wyndham Cincinnati (4320 Glendale Milford Road, wingatehotels.com, doubles from $92) is located in the Blue Ash business district.

TALK TO US! We want to know: What's your favorite food festival?